Trending
You are at:Home»THEATRE»THEATRE: A SHRED OF EVIDENCE
By Karen Salkin on March 22, 2016 · THEATRE

A SHRED OF EVIDENCE

I always love anything that suggests just how detrimental drinking is, so I enjoyed this play at Theatre 40 in Beverly Hills High School even more than I would have from the presentation alone.  I hope that drinkers take it as a bit of a warning, as well. 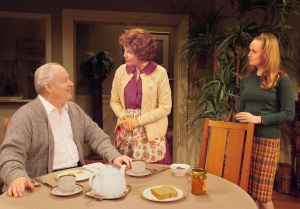 A Shred of Evidence (which is a great title for this drama, by the way—I was not familiar with the play, but knew exactly what the tone would be from the title alone!,) reminded me of a situation that I knew of several years ago.  When I was still doing my show, Karen’s Restaurant Revue, I met a bartender at an upscale eatery. Because he was a KRR fan, he confided in me.  He knew that I don’t drink, (because I mentioned it on the show a lot,) and told me that he didn’t, either.  But our reasons were totally different.  Mine is because I abhor the taste of alcohol.  His was because he thought he hit someone with his car when he was drunk.  He said he gave up drinking, (and driving, too,) the very next day!  As much as I pray he didn’t really hurt anyone, I respect him for realizing the harm that drinking was doing him, (and others,) and therefore having taken those steps to change his life.

So, not to give away the plot of this show, but it totally reminded me of that little true-life tale.  And, especially for a play that was written almost sixty years ago, it is pretty interesting.  The only drawback is that it’s a bit wordy for my taste, with some stretches that could be waaay shorter, but if you go see it, (which I’m recommending that you do,) hang in there with it because it does pay off. And the whole journey itself is engaging.

The play takes place in the English countryside in 1958, and everything about it (the actors, set, costumes) gives off that feel.  I’m a big fan of old movies, especially mystery ones, and especially British ones of those, so I was digging this experience.  What really adds to the ambience, big-time, is the use of wonderful, subtle mysterious music.  That truly makes it feel like a movie!

As always, I absolutely love the gorgeous set! I have no idea how Jeff G. Rack comes up with these different designs for every show, with no two (that I’ve seen, anyway) looking similar. 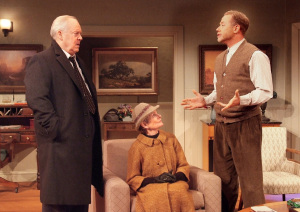 David Hunt Stafford with the couple I mentioned–Esther Ricman and Peter McGlynn. Photo by Ed Krieger.

I also applaud the mainly excellent casting.  The only one that left some of us scratching our heads is the use of a May-December couple in smaller roles.  The young-ish man plays a key role in the story, but his much older wife has only a few lines.  The age difference is very distracting because that casting is so unusual that it looks like it means something to the plot.  It turns-out that it does not, so I don’t understand it.  This is absolutely nothing against the actress who plays her; the wife is one of those roles that could have gone to any female, and in this case, she should have been between the ages of twenty and forty, tops. Perhaps the casting person thought that few actresses would be willing to put the time in for such a small role, but I guarantee that there are many young women who would have accepted it, especially to be around such a vaunted theatre company. 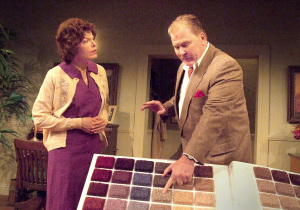 That anomaly aside, everything else works in A Shred of Evidence, including the spot-on English accents. There’s not a weak one in the bunch, even with different dialects. And I laud the powers-that-be over there for the “Special Thanks to Linda Brennan for her assistance with dialects” credit on the title page of the program. Major kudos to them all!

As excellent as all the acting is, I feel that the energy really picks-up when Richard Hoyt Miller, as Captain Foster, enters in the second act. His performance offers some welcome comic relief to the taut drama. 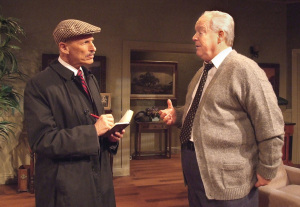 And Daniel Lench, as the Inspector, plays his role with just the right amount of “Columbo” in it, without being schtick-y.

And I must also commend the star, David Hunt Stafford (whom I previously knew only as Theatre 40’s Artistic/Managing Director.) He has the arduous task of being on-stage for all but a few minutes. And, even with the audience knowing from the beginning that he had been drunk during the period in question, he makes us feel for his character the whole time.

All these elements add up to more than a shred of evidence as to why you should see this play!