Trending
You are at:Home»THEATRE»THEATRE: A PLAY IS A POEM
By Karen Salkin on September 25, 2019 · THEATRE

A PLAY IS A POEM

There are two reasons I’m thrilled that I saw this new play at downtown LA’s Mark Taper Forum.

First is that I absolutely loved, loved, loved the Music Center’s happening new Plaza! I usually am far from a fan of change, but this new look is impressive. I can’t wait to review all the new food places for you guys! (Now I just have to find time to get to the theatre early every once in a while! So don’t hold your breath for it to be happening soon.) 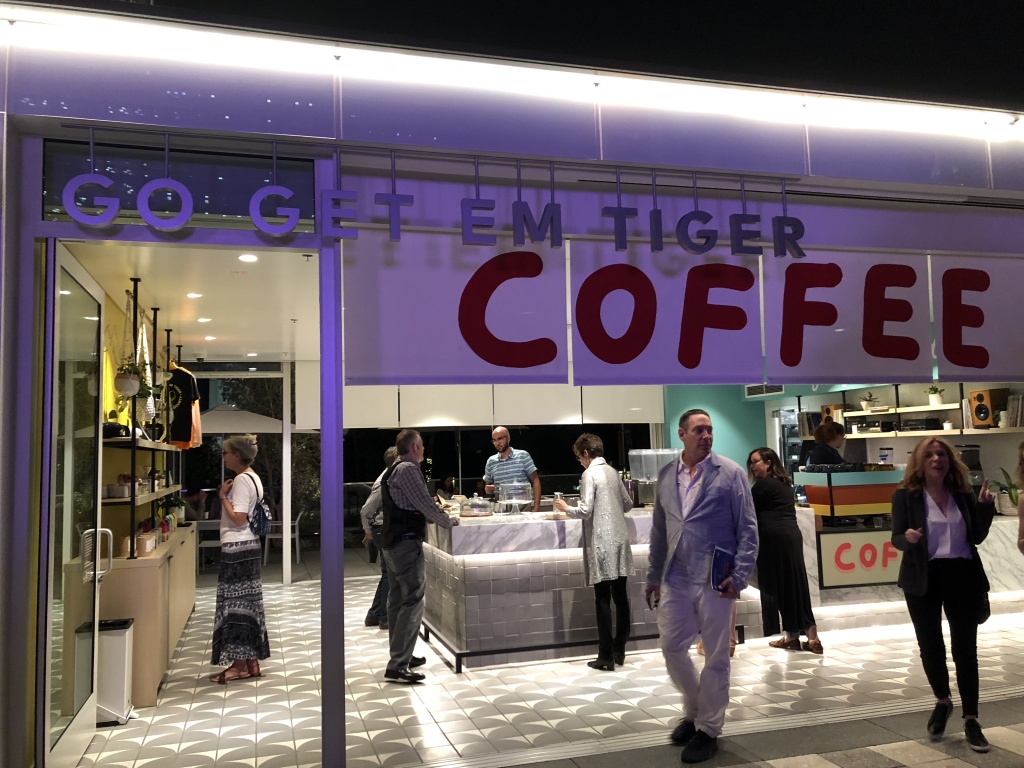 The second is that the opening night of Ethan Coen’s A Play is a Poem was the absolutely most star-studded audience I’ve had the good fortune to be among in a very long while! On our way to the opening night, my friend Marc had asked me if I thought that movie stars who’ve worked with the Coen Bros, such as George Clooney, would be there, and my immediate answer was, “Of course not!” In my very long show biz experience, no one that big ever shows up at anything outside of film premieres and awards shows. And then lo and behold, who was walking up the stairs to his seat right in front of me but none other than Brad Pitt!!! I recognized him at first only because of that stupid newsboy cap that he has not taken off his head since his split with Angelina!!! (I guess it’s his security blanket.) But I was sort-of thrilled to see him. I had done so only once before and it was at the Ahmanson, one of the two other theatres at the Music Center! I guess my love of that venue is in great company. (You can read who else was there in my next Celeb Sightings column, which is coming really soon, so keep an eye out for it.) 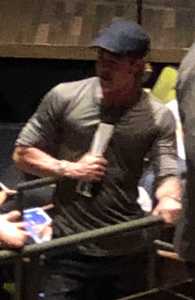 Now let me preface my actual review of A Play is a Poem, which was written by Ethan Coen, by saying that I’ve never been a fan of the work of the Coen Brothers, (although I am jealous of siblings who get along so well,) so I wasn’t anxious to see this play. I haven’t enjoyed any of the nine films of theirs that I’ve seen. (Don’t panic—I’ve never seen The Big Lebowski, which is considered to be their crown jewel.) But Mr. X loves their movies, so I decided to give it a chance, (although he could not come with me that night. Oh well.)

A Play is a Poem is five distinct stories, some better than others, presented in just under two hours with no intermission. None of them are connected in any discernible way, there’s no apparent theme running through the quintet, and I don’t know what any of it is supposed to mean. But I always welcome variety like that, and I actually did enjoy the majority of them, to one extent or another. (I guess miracles never do cease.) And more importantly, I really appreciate this opportunity to see what a movie icon, in this case Ethan Coen, does with a stage presentation. Even though they’re both entertainments that involve writing and acting and directing, they’re very different milieus.

I have to admit that the show did not have my full attention all night because the people in front of us were carrying on in the most inappropriate manner the entire time. But I’m sharing what I took away from the play, both yay and nay. 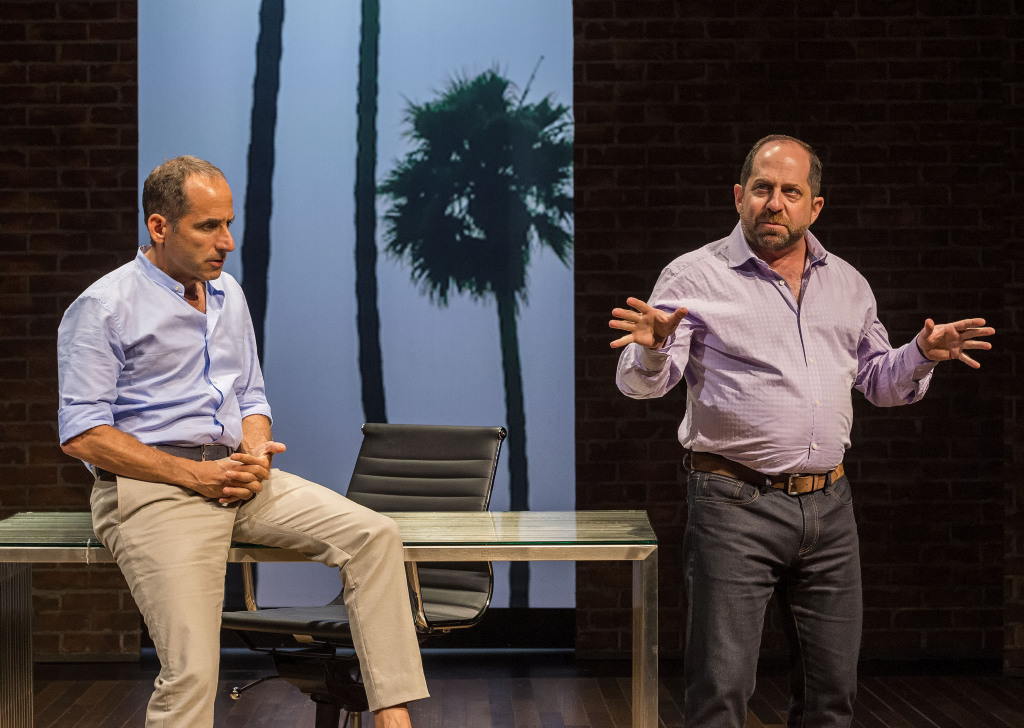 Look-alike actors Peter Jacobson and Jason Kravits in the final scene of the show. Photo by Craig Schwartz, as is the one of Ro Boddie and Sam Vartholomeos at the top of this page.

An interesting touch is the interstitial singing of little ditties by a woman who sounds sort-of like a singer from the ’70s. But more impressive is that she accompanies herself on the piano, ukulele, and…xylophone! Wow.

And I must laud the clever and easy set by Riccardo Hernandez. It’s just perfect! Even the changing of it is entertaining. 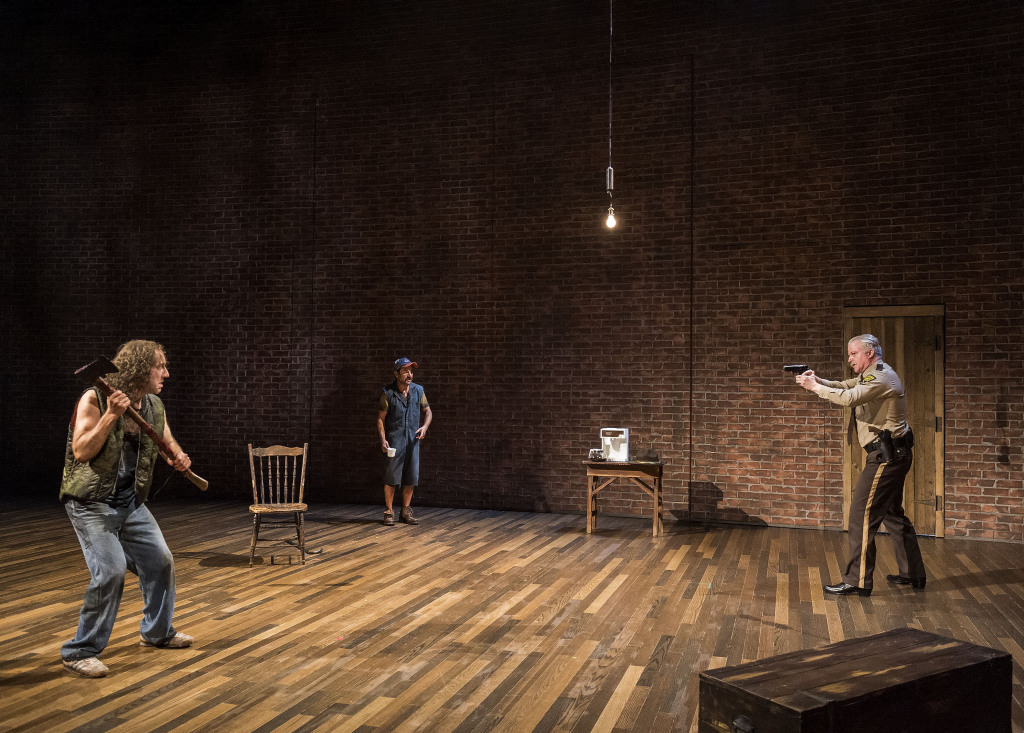 The first vignette, about hillbilly brothers in Appalachia, is soooo Coen Brothers. The entire audience, (including me) were guffawing from the get-go. I loved seeing Max Casella, who was the absolute hit of this show for me. But when did he become so grown-up!? I still think of him as a kid. He’s like his own father now, (which I totally understand because people think my headshots are of my own daughter! And I don’t even have one!) Even though he has more acting credits than I have nail polishes, (which is a lot,) and most are on famous television shows (that I’ve never had the time to watch,) he’ll always be Doogie Howser’s sidekick to me. (And that’s a positive.)

My absolute favorite line of the night came in the second piece, about an old-timey film noir-type detective. In a piano bar, a torch singer, (who sets the mood perfectly,) asks the detective how he is, and he answers, “I can’t complain. How about you?” She comes back with, “I’m a torch singer, honey. They pay me to complain.” And I love that she waits for the laugh after that first sentence because the audience gets the joke from just those first five words. 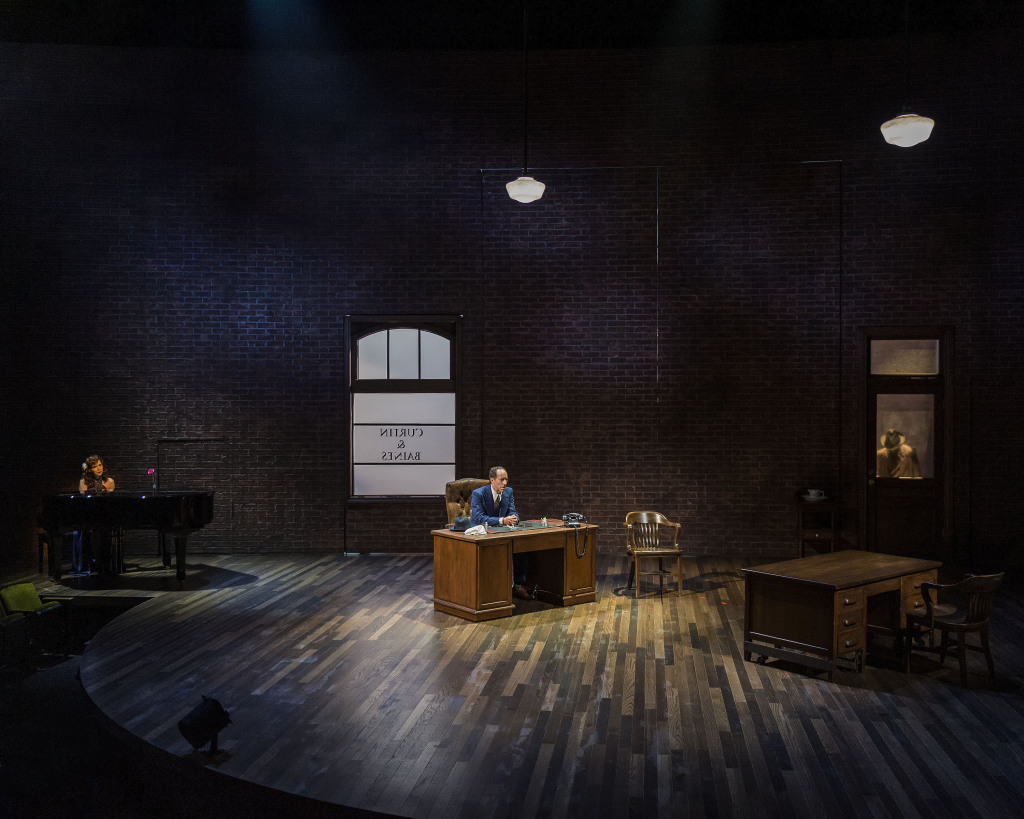 Nellie McKay( at the piano) and Joey Slotnick. Photo by Craig Schwartz.

Also in that same sketch, the gumshoe tells a new associate that someone named Marty had died, and the dumb man still asks, “How is Marty?” I swear, I went through that exact same thing once! Edna, the woman who brought me up, had died years before I met my cute-but-dumb friend Judy. Then one day, Judy wanted to show-off in front of some of her pals, so when I mentioned Edna, Judy dramatically queried, “How is Edna?” My answer was, “Still dead.” We still laugh about it today! Maybe Ethan Coen was one of her pals in the room back then.

This is where I have to acknowledge that A Play is a Poem starts out so promisingly, but doesn’t stay so, with the nadir being the third act. It does have the prettiest set, though, featuring a charming gazebo; I just wanted to rush down to the stage and bask in its beauty. But the old man next to me slept through that entire episode, as did a young guy in the row in front of me. Then I started noticing that about every six people were dozing! Brad Pitt’s bodyguard even left his post during this one. I don’t know if it was actually uber-long or just felt that way. Perhaps this scene is Ethan Coen’s attempt at serious writing because there are very few laughs in it. 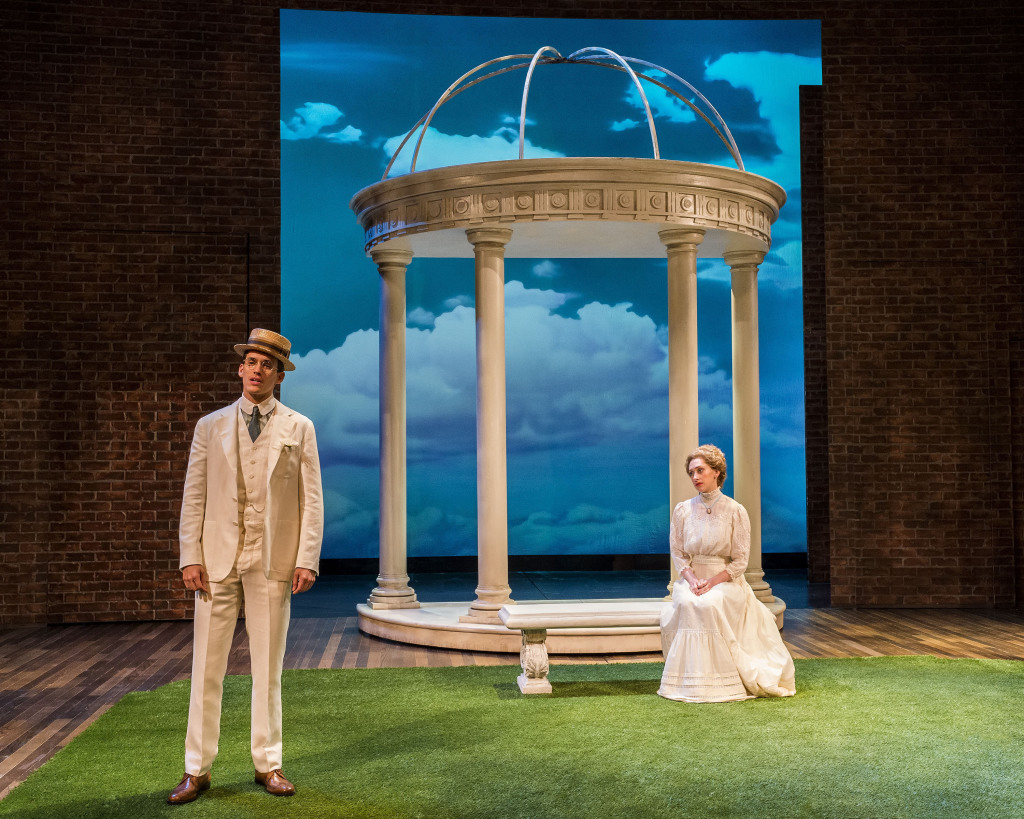 Therefore, the opening night audience seemed very relieved to laugh again when the humor resumed in a big way with the fourth scenario, which is set in a New York tenement apartment, and is sort-of reminiscent of The Honeymooners. It features my favorite acting duo of the production, Max Casella and Joey Slotnick. An early visual bit, which brilliantly demonstrates a quintessential New York experience, is not to be missed. 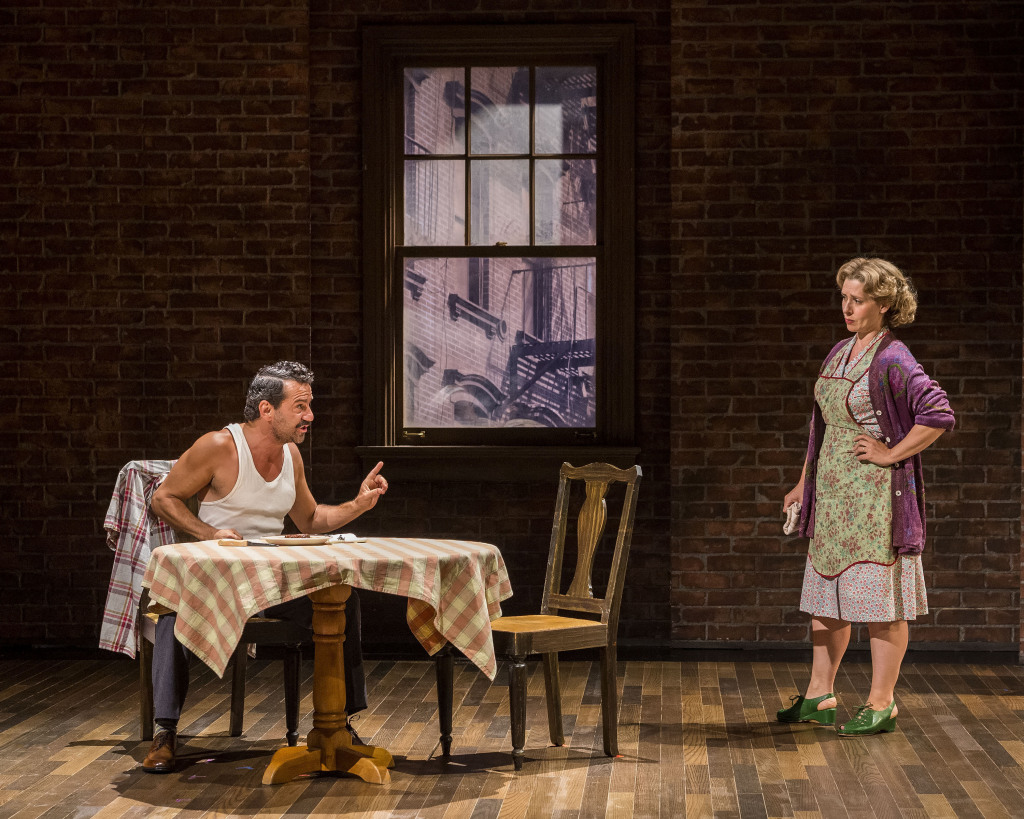 The show finishes on a high note with a peek behind the scenes in Hollywood, where producers pitch crazy script ideas to a studio executive. The show-business-centric opening night audience laughed knowingly at just about every sentence. A bon mot of that segment is, “What does the writer know? If he knew anything, he wouldn’t be the writer!” I hear you, honey. So I’ll just leave my writing right here.