Trending
You are at:Home»THEATRE»THEATRE: 44: THE unOFFICIAL, unSANCTIONED OBAMA MUSICAL
By Karen Salkin on November 11, 2022 · THEATRE

I had recently paid my first visit to the Bourbon Room, the venue for this new musical, to see two singers perform in the intimate Lounge. When I was leaving that night, I checked-out their much bigger room in the back. So when I now had the opportunity to see 44:The unOfficial, unSanctioned Obama Musical in there, I was happy to take it. 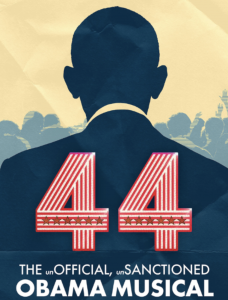 And I was rewarded with a really fun show. I was already a fan of T.J. Wilkins, who plays Obama, so that was added incentive for me. And since I used to know the father* of the playwright, composer, and director, Eli Bauman, seeing his son’s work was entertaining, as well. *[Note: The uber-proud dad is Jon Bauman, “Bowzer” from the singing group Sha Na Na.]

My friend Marc and I saw the 44:The unOfficial, unSanctioned Obama Musical on Election Night, which made it extra special. The audience was shockingly full on what my mother would call “a plain little Tuesday night.” But it actually wasn’t a plain night–-it was literally pouring outside! I could not believe that soooo many people braved that weather, which told me they really wanted to see the show!

The room is set-up like a nightclub, with (electric-)candlelit tables and banquettes. And, since there’s a drink/food minimum in addition to the tickets, most people were eating and drinking a bit. (More on that later.) But this musical is sooo entertaining that no one chatted or ate throughout it; all attention was riveted to the stage! 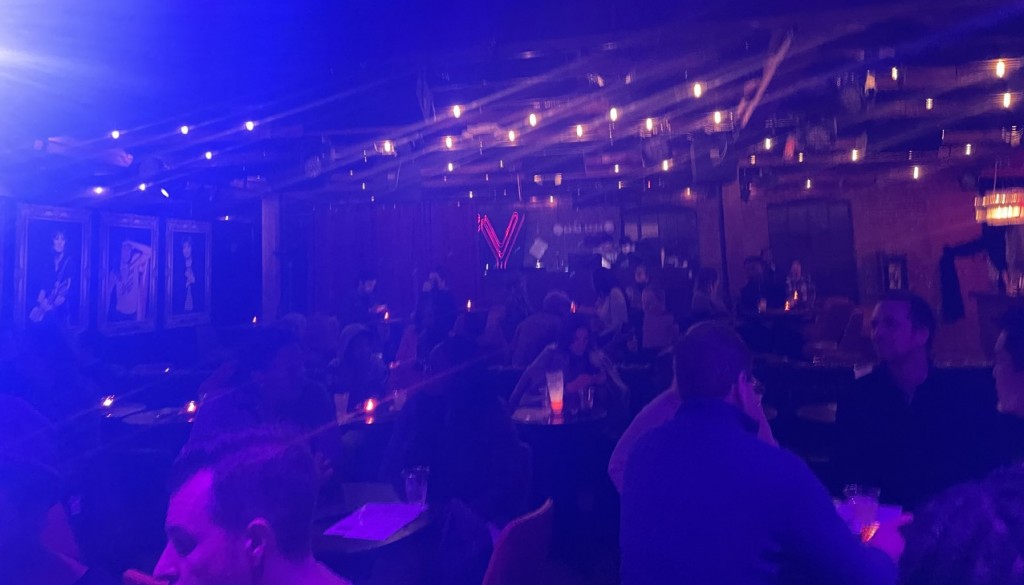 The room filling up. Photo by Karen Salkin. (Can you tell that I’m desperate for pictures of this event?!)

I swear—it was so good that I actually want to see it again! From listening to me singing its praises all week, even the hermetic Mr. X wants to join me! But we all have to hurry because there are only three performances left–tonight (which is Friday,) and Monday and Tuesday.

I really hope the show will go further, and Marc insists it needs to be on Broadway! He even asked me if they have a soundtrack he can buy; he loved it that much. As a matter of fact, in the just about five years of going to events with me, this is the happiest I’ve ever seen the guy! I believe it’s even the first time he’s ever thanked me profusely.

44:The unOfficial, unSanctioned Obama Musical is basically all songs, (twenty-seven of them in two hours!,) with a minimum of dialogue. And they’re all really good. What makes them especially interesting is that there are so many different genres in there! All written by just one guy! That’s pretty impressive. 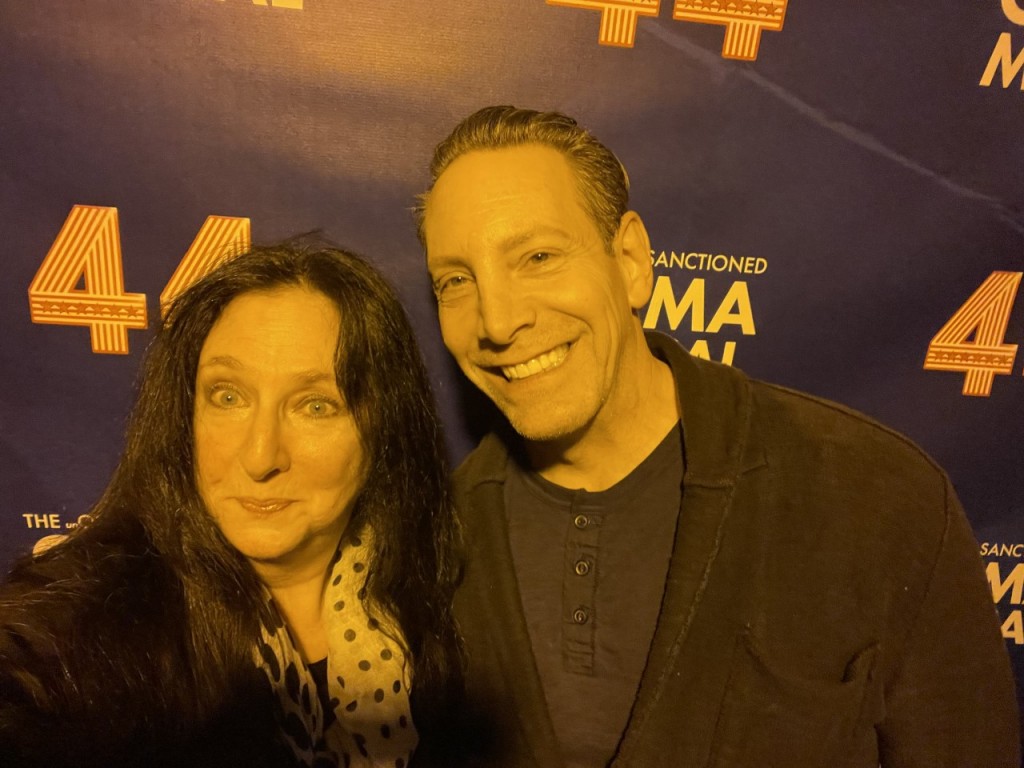 Karen Salkin and Marc Winer in front of the step and repeat, which all the guests seemed to enjoy doing, as well. Photo by Karen Salkin.

Some of the music reminded me of ’60s soul, which I love, so it gave me good feelings. There are plenty of clever songs, too, such as Obama Cares. There are a lot of keen touches in the script, as well. I swear—I never heard Marc laugh so much! Or with such gusto!!!

By the finale, the most fun members of the audience were up dancing and singing along. For once, I can truly say that a wonderful time was had by all! Everything about 44:The unOfficial, unSanctioned Obama Musical at the Bourbon Room makes it the perfect night out.

[Note: I wish I had pix to show you of this vibrant musical, but alas, the quintet I received from the company are waaay too dark and are of just individuals, rather than of the production. I didn’t take any of my own because that would have been rude to the actors who were up there working. That’s why there are a few totally sub-par pix of me with the guys in this review, just to share something!]

Overall, the cast is made-up of a baker’s dozen actors with a half dozen band members. (I appreciated that the drummer is behind plexiglass so that his playing won’t overpower the situation.) There are excellent performances and singing voices all the way through. 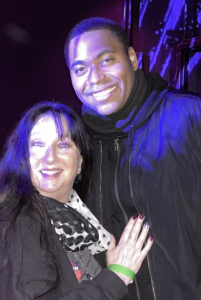 Karen Salkin and the adorable star of the show, T.J. Wilkins, in a horribly-lit pic! Photo by Marc Winer, who admits he doesn’t take good pictures.

T.J. Wilkins is perfect as Obama. Of course, he sings better than our former suave prez, but his smoothness brought up memories of Barack singing Let’s Stay Together and Sweet Home Chicago. T.J. actually sings so beautifully that, as good as the entire presentation is, I could have just listened to him all night.

The other stand-out for me was Larry Cedar as Mitch McConnell. His rap number, Filibusters, was not only my fave, but it brought the house down! Being a bit familiar with his work, his rapping and movement skills took me completely by surprise.

And every time Kevin Bailey appeared sort-of out of the blue as John Boehner, with his fabulous deep voice, the place went wild.

Old school R&B singer Shanice, who plays Michelle Obama, sure can wail. That was fabulous to hear live.

44:The unOfficial, unSanctioned Obama Musical is two hours long, in a row. It could really benefit from having an intermission, though. The production is so good that nobody is going to leave after the first half. And it would actually be fun to mingle for a while and talk about what we had seen so far. (By the way–on the night I saw it, it started a half hour late, so plan accordingly if you have a babysitter. Or a dog!)

Another reason it needs an intermission is that all those people who are drinking all night might need to go empty their bladders, especially from laughing so much, and so hard! 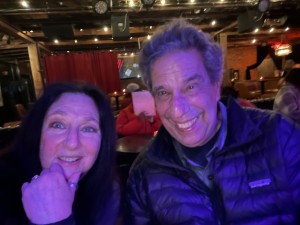 Karen Salkin (in yet another awful hair-rained-upon pic) and Jon “Bowzer” Bauman before the show. Photo by Karen Salkin, because she has no pix of the actual musical!

On a personal note, (or two or three,) it was like old home night for me there. As I said earlier, I used to know Bowzer when I was first starting-out in show biz, so it was lovely to catch-up with him a bit. And Larry Cedar is an old compatriot of Mr. X, having both studied in the MFA Theater program at UCLA, and then seeing each other on sets over the years. So I really enjoyed chatting with him post-show, and seeing how nice he is, in addition to being so talented. And I had met T.J. seven years ago, when he performed with a jazz combo at an afterparty I attended, (and was the best part of that event!,) so hanging a tad with him again was really a treat.

Now, a small bit of advice when you see 44: The unOfficial, unSanctioned Obama Musical at the Bourbon Room: Do not sit in the front row, as I chose to do at first. Besides that you have all those mouths breathing, (etc.) right down on your head, you’ll miss the whole tableau. And the sound is much better further back. The stage is elevated enough that all the sightlines are good, even with people at tables in front of you. Believe me–I had to move two times, so I had three different vantage points in which to view the action. And the middle back is the best. (Also, and I say this as a person who’s always hot, it’s pretty cold in there, so I suggest you dress in layers.) 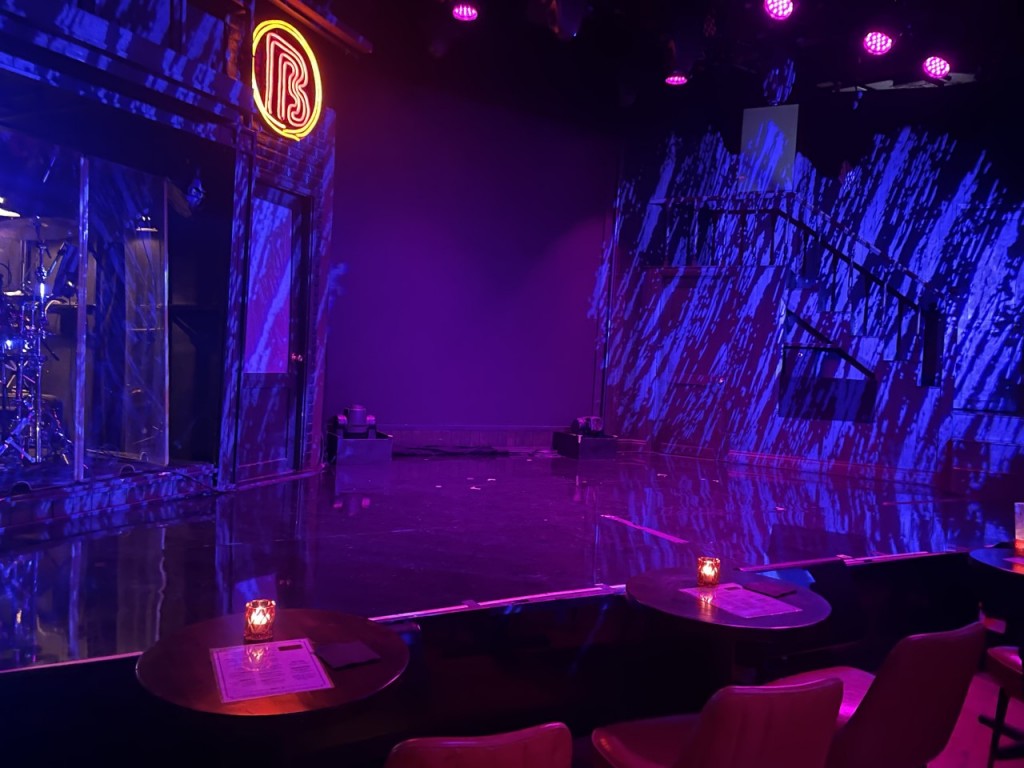 The stage before the show, and the front row. Notice the plexiglass “cage” off to the left, behind which the drummer sits. Photo by Karen Salkin.

As for the venue, the food is surprisingly delish! Marc and I shared the tasty Brussels sprouts and each had a grilled chicken sandwich, which we both loved. If you get fries, (which come with every sandwich,) make sure to order them well done. But, I’m sad to report, the service was pretty weak. So prepare to have patience. They never bussed our table; we had to sit there all night looking at, (not to mention smelling,) the dregs of our meal, which I can tell you is not at all pleasant. That’s just one more reason we were happy to move to the back of the room, to an empty table, after a while. (By the way–watch-out for the extra charge that the Bourbon Room adds on, which should really act as most of the tip.)

Besides all the mirth that 44: The unOfficial, unSanctioned Obama Musical offers, if you miss President Obama as much as I do, (I can’t imagine us being lucky enough to have another leader like him ever again,) this is the show for you. But McConnell, Cruz, Cain, and Boehner lovers may as well just sit it out. They have no sense of humor, (or decency or anything else good,) anyway. (Hey, maybe I’ll write a song about that!)