Trending
You are at:Home»MUSIC»THEATRE/MUSIC: YOU I LIKE: A MUSICAL CELEBRATION OF JERRY HERMAN
By Karen Salkin on January 12, 2021 · MUSIC, THEATRE

YOU I LIKE: A MUSICAL CELEBRATION OF JERRY HERMAN

Whenever I receive an “Opening Night” invitation these days, at first I get excited, and then I remember that the world is very different now, and the sender means I can watch their work on-line. Since I sit all day to write this e-zine, I usually decline all invites to sit some more and watch something on my computer. 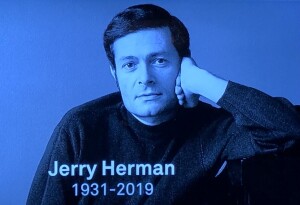 Photo by Karen Salkin, from the PlayhouseLive screen.

But PlayhouseLive, the on-line branch of the venerable Pasadena Playhouse, not only has made their app available to watch on TV, (as opposed to just on a smaller device,) but what musical theatre fan could turn down hearing Jerry Herman’s wonderful songs again?

So I “attended” the opening of You I Like: A Musical Celebration of Jerry Herman the other night, and was treated to a lovely presentation that features many of the legend’s compositions, plus several anecdotes about the man and his music. As you can imagine, there’s a lot about Hello Dolly in there, since that’s Jerry Herman’s biggest musical. (And one of the biggest ever!) Shockingly, even though my parents took me to soooo much New York theatre, I never saw that show until last year! And here in LA, to boot!

These songs brought up so many personal memories for me, (some of which I’ll share as we go along,) as I’m sure it will for you. What a wonderful thing for music to do for us, especially in these uber-crazy times.

First of all, as I’m sure you’ve figured-out by now, the show is a musical revue. I’m actually not a fan of revues, even though I chose that spelling for my former TV show, Karen’s Restaurant Revue, which was actually a review show, not a revue at all. (Okay, so I’m a fan of the word.) But this one was a delight. And it’s only about an hour and a half long, which goes by very fast!

It’s all hosted by the creator of You I Like: A Musical Celebration of Jerry Herman, Musical Director Extraordinaire, Andy Einhorn, who delivers a very educational background at the top, with more interesting tidbits sprinkled throughout the show. He clearly loves, loves, loves Jerry Herman. I so appreciate his enthusiasm. It’s like if I was describing the works of James Bay! (Broadway fans—do not judge; I’m into more than solely show tunes. )

Even though no one sings this one in the show, one of those tasty tidbits Andy tells us about is that Jerry Herman wrote the holiday classic, We Need a Little Christmas! I had no idea. It’s from Mame, which I’ve never seen because, even though I adore Angela Lansbury, who once impressed me personally, as well, no one will ever be Auntie Mame to me but the amazing Rosalind Russell.

You I Like: A Musical Celebration of Jerry Herman was filmed on the Pasadena Playhouse stage, which I was thrilled to catch a glimpse of again; it was special to see a performance on an actual stage instead of Zoom, which seems to be de rigueur these days. 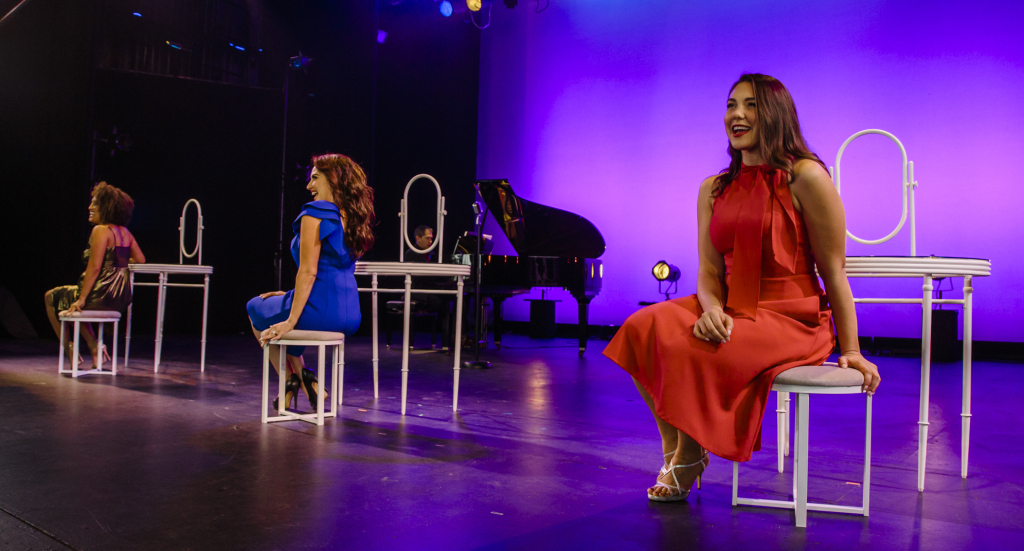 (L-R) Ashley Blanchet, Lesli Margherita, and Andrea Ross. Photo by Jeff Lorch, as is the one at the top of this page.

The singers are Nicholas Christopher, Andrea Ross, Ryan Vona, Ashley Blanchet, and Lesli Margherita, accompanied by Andy Einhorn on piano. The music is all just the piano and voices, (save for one number, which I’ll tell you about soon,) but all the songs sound so full. I’m so jealous of people who are blessed with vocal talent; the only Broadway tune I can deliver is Take Back Your Mink! [Note: For those nescients, that one is mainly talking, in a Brooklyn accent, of course, and movement. So not a lot of real singing involved.]

The show begins with a group number from Hello Dolly, and then progresses to mainly solos with the occasional duet or trio. There are songs from Mr. Herman’s quintet of Broadway musicals—the more famous Hello Dolly, Mame, and La Cage aux Folles, along with his lesser-known works–his very first show, Milk and Honey, Mack and Mabel, and two I had never even heard of before–Dear World and The Grand Tour.

The order of songs is excellent; the show never gets boring or repetitive. And the sort-of mash-up of a duo of wonderful Mack and Mabel tunes–Time Heals Everything and I Won’t Send Roses–is quite creative. I was very young when I saw that show, but I Won’t Send Roses really got to me even back then. (Maybe that’s why I get such a kick out of that Mr. X still never admits how madly in love with me he is, after all these years together!)

Okay, before I finish lauding You I Like: A Musical Celebration of Jerry Herman, I have to tell you a little personal story here. Every time I hear the title Mack and Mabel, (which I can assure you is not very often,) it gives me a little chuckle.  Here’s why: When I was just a teenager, a very ballsy friend took another pal and me to see the show. When it was over, she said, “Let’s go backstage to see Bernadette!” (Bernadette Peters was the star of it.) I said, “We can’t just go backstage and burst in on someone!” Even though I was a teenager, I knew that that was not normal theatre protocol. But my friend told me that she knew Bernadette, so off our trio went. My friend told the backstage guard that she knows Bernadette, and we were shown into her dressing room. Bernadette looked pretty shocked to see three total strangers intruding on her time in-between shows. (We were young, so we had gone to a matinee, and Miss Peters still had her nighttime show to do.) And after my friend told her how much she loved her from something Bernadette had done previously, (which is why she kept declaring that she “knew” her—oysh,) she proceeded to make herself at home in the dressing room for at least another half hour! I was horrified, (still am,) but didn’t know how to get my friend out of there. But every time I picture Bernadette’s anguished face when she couldn’t get us to leave, I laugh out loud. I’m actually doing it again right now!

Now, back to this show. It’s all very enjoyable, but my favorite number was If He Walked Into My Life from Mame, sung here by Nicholas Christopher, who was also my fave performer of the night. Maybe that’s because his appropriate tears emulated the usual ones of Bernadette Peters, which has always fascinated me. 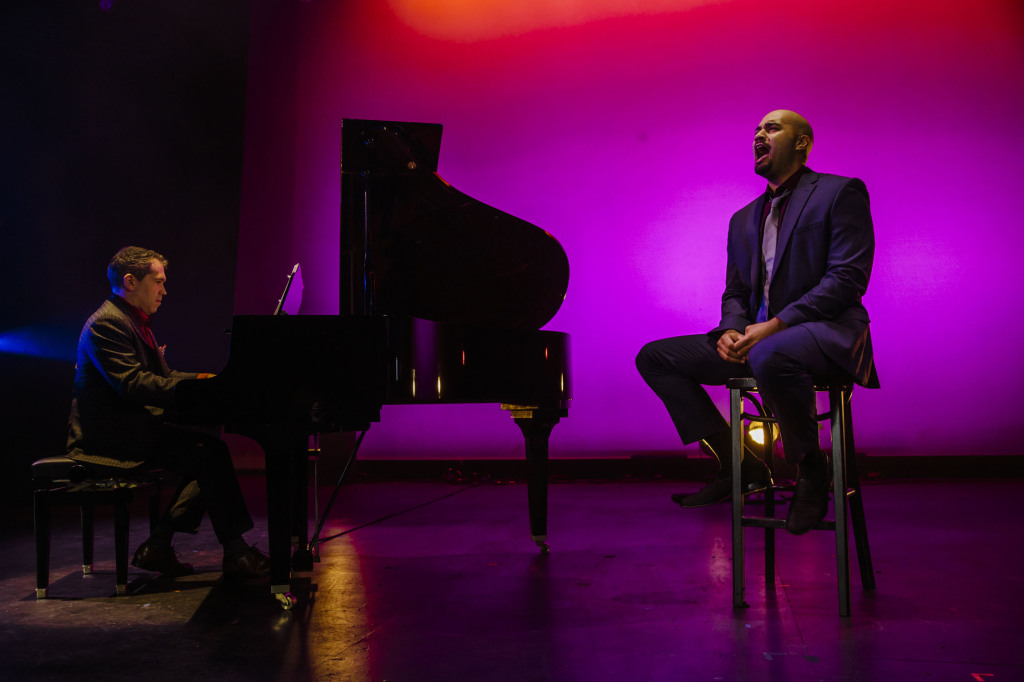 And I always love hearing La Cage’s I Am What I Am; it’s such a strong anthem for everyone! (Mr. X heard that one when I was watching, and asked if it was from a show about Popeye! I think, and hope, he was just kidding. But even I think of the spinach-loving sailor every time I hear that song, too!)

The title tune of this production, You I Like, is performed as a trio, with the two guys and Andy, whose sweet voice I loved!  It’s a lovely number.

An extra little treat was Ryan Vona accompanying himself on guitar for Marianne from The Grand Tour. I wanted to hear him do it again right away. 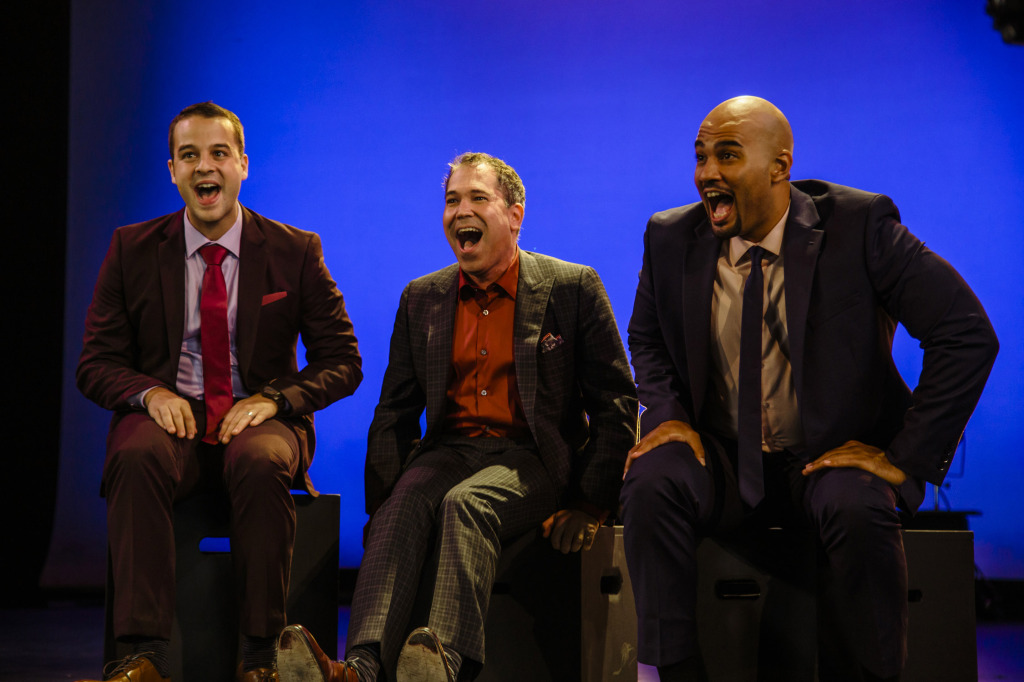 Now that I’ve whetted your appetite, here’s the good news–you can see the show, too, for the next almost-month. I know that some of you may think it’s sort-of more for fans of classic Broadway musicals, as opposed to more modern offerings, but I promise you that it’s all charming music. And I believe that everyone will recognize something. I can just hear so many audience members saying, “So that’s where that song is from!”

And if, like I do, you feel that you don’t have time to watch anything outside of the news these days, this is an easy one; of course you can watch this show, it’s not really a visual (despite all the outfit and hair changes)—you can treat it as sort-of a unique cast album, and just listen to the beautiful music. It might just give you a modicum of peace in this stressful world.

Those of us who saw You I Like: A Musical Celebration of Jerry Herman on the virtual Opening Night had an extra treat. It was a special pre-show tribute to Jerry Herman, hosted by the aforementioned creator of this theatre piece, Andy Einhorn. He chatted with Hello Dolly performers David Hyde Pierce and the legendary Bernadette Peters, who looked absolutely wonderful! She’s the first person I’ve seen look good on a Zoom or webinar. I’m so happy for her. She mentioned that she loves the song, Time Heals Everything, from Mack and Mabel, so perhaps that’s she began her signature of crying just about every time she sings, which we all love.

The whole thing made me long a bit to finally be at a real opening night again. For this one, I’m sure that I would have bumped into every musical theatre fan in Los Angeles!

All that will happen again, (knock on wood,) hopefully by the end of this year. But in the meantime, we should all be grateful for creative endeavors such as this one from the Pasadena Playhouse. Now go enjoy it! For many of us, as the La Cage song states, it will be The Best of Times this month!

You I Like: A Musical Celebration of Jerry Herman will be available to rent on PlayhouseLive through February 7. For more info, got to www.pasadenaplayhouse.org.