This is the 50th anniversary of the US Open!

That’s former US Open Champion Marin Cilic in the foreground.

Making it extra exciting for the fans is news that, for the first time in three years, all fourteen active singles champions, of both sexes combined, equally, will be competing. Roger Federer, Rafael Nadal, Novak Djokovic, Andy Murray, Stan Wawrinka, Marin Cilic, and Juan Martin del Potro on the men’s side, and Angelique Kerber, Svetlana Kuznetsova, Maria Sharapova, Sam Stosur, the two Williams sisters, and defending champion Sloane Stephens on the women’s.

But for me, I’d prefer it if, in the male draw, only low-level ones would compete, so that The Stranger I Love Most In The World, Roger Federer, would for sure win it. I can’t take the stress that I just went through with Wimbledon! 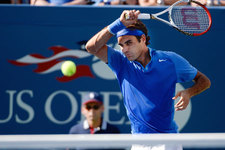 Roger Federer in last year’s US Open. We know it’s not this year because he’s changed attire sponsors since then.

But, honestly, after Roger Federer’s awful five-set loss in the quarterfinals of Wimbledon, which was the last Major before this one, my heart just isn’t in the US Open this year. As of right now, I still plan to watch it all, but I don’t think that I’ll be shunning everything else in my life this time around, as I always do for these annual two weeks.

And there’s a weird aspect to this year’s tourney. That is that a trio of former Grand Slam Champions–Stan Wawrinka, Svetlana Kuznetsova, and Victoria Azarenka, one of my favorite players–needed “Wild Cards” to get into it!!! I always think of at least Stanimal and Vika as headliners!!! (The two females are ranked high enough to have received direct entry into it right now, but they were ranked too low for the cut-off when the July 16 deadline rolled around; Sveta because of injury and Vika because of maternity leave, although that did not stop them from rewarding Serena Williams, so go figure.) 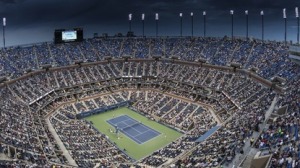 Okay, that’s it for now. I have to go start watching the tournament already!

And, as always, (which I hope I can say for the next several years, despite his already advanced age,) Go, Roger!!!

[Note: I will try my best to tweet my thoughts along the way, so if you don’t already follow me on Twitter, this would be a good time to do so. @MajorCelebrity. I already know that I won’t be able to do much in the first couple of days, but I’ll weigh-in as much as I can throughout the entire competition.]