Trending
You are at:Home»TELEVISION»TELEVISION/THEATRE: TONY AWARDS 2015
By Karen Salkin on June 9, 2015 · TELEVISION, THEATRE 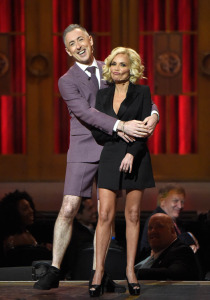 I didn’t take notes as the Tonys went along because I wasn’t planning to write about the show. (Oh no—I just realized that I began my usual awards show live-tweeting, at the heavy suggestion of my flight-mate, Lily Tomlin, with the 2012 Tonys! I should have planned on doing it again this year, and I’m so sorry that I didn’t. But I had just come from a big theatre opening night here in L.A., complete with after-party, [which I’ll tell you about tomorrow,] and I wanted to finish watching the Tonys on time, so I could then watch the entire Game 2 of the NBA Finals! Whew. So, my mind was a bit scattered on Sunday, and it was easy for something, even as big as live-tweeting the Tonys, to slip through the cracks. If you were looking forward to my doing that, please forgive me.)

But everyone has been asking me for my thoughts on this past Sunday’s Tony Awards, so here are just a very few notes, (as opposed to my usual very detailed write-up,) off the top of my head.

I’m sorry to disappoint some of you, but, since it was basically such a good show, I have absolutely no snark this year! I was happy for some of the winners, (like the classy, long-suffering Kelly O’Hara,) I didn’t understand a couple, (like, after hearing her awful vocal performance on the telecast, Ruthie Ann Miles winning for The King and I,) and I was semi-rooting for one or two who did not win, (like that little Jodie-Foster-as-a-kid-actress doppelgänger from Fun Home, Sydney Lucas.) But overall, it was really an excellent show.

I didn’t even realize until about ten minutes in that it wasn’t being hosted by either Neil Patrick Harris or Hugh Jackman! 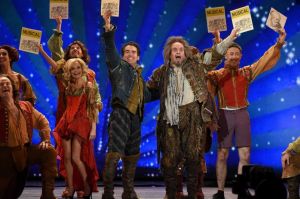 The cast of Something Rotten!

Kristin Chenoweth was cute and funny, but she looked like a little old lady because of her awful posture.  How could one so–petite shall we say–not know enough to stand up straight???

I’m not at all familiar with most of the nominated, or even just mentioned, shows, but, for the most part, they looked really interesting, especially Something Rotten! (This one time, the exclamation mark was theirs, not mine!) 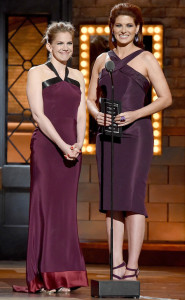 Since Debra Messing and Anna Chlumsky were among the early presenters, I at first erroneously thought that wardrobe was being officially done this year, and that the ladies’ almost-matching purple dresses were on purpose. And then, one word quickly occurred to me—“Awk-ward!!!”

I realized after the show was over that I’m so glad that, for perhaps the first year ever, none of the presenters did that pretentious Broadway actor walking, talking, or waiting for applause. So, props to all of them! And congrats to the winners. And, I mean it, the nominees, as well. No matter what anyone says, who wouldn’t rather at least be nominated than not?!