Trending
You are at:Home»KAREN'S RANTS»TELEVISION/KAREN'S RANTS: DANCING WITH THE STARS–SEASON 16
By Karen Salkin on March 26, 2013 · KAREN'S RANTS, TELEVISION

Just when I’m finally weaning myself from voting for TV “talent” shows, the judges on this newest season of Dancing With The Stars have to go and ruin it for me! As many of you know by now, I hate unfairness, and some of their marks have greatly missed the mark, so it falls to me to pick up their slack by voting. Multiple times on multiple phones. I even enlist an un-willing Mr. X to my mission of correcting the travesty that the judges hath wrought. (It’s actually not that hard to make him do it because he’s appalled by many of the judges’ marks, as well.)

Why do the judges have it in for D.L. Hughley??? They’ve given him some of the worst marks in the history of this show! He’s working really hard, and they shouldn’t be allowed to humiliate the participants like this. These are supposed celebs, who don’t need to put themselves out there like this, to get the abuse that, this season, is being heaped on D.L. The idiot judges need to be gentler, especially in the first couple of weeks. 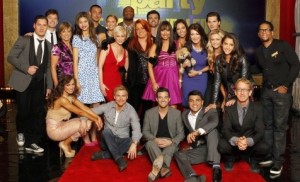 The stupid Bachelor guy, Sean Lowe, (whose name I actually had to look up, along with a couple of the others,) and the dreadful, cadaver-stiff Lisa Vander-whatever, were way, way, way worse! But this weirdo judging panel kissed their butts!!! I’m left scratching my head over this season so far.

And last night, when Kellie Pickler and Derek Hough (more on them in a sec,) were clearly superior, the judges gave them the same number as Zenyatta! (I know that’s really a famous horse’s name, but it’s obnoxious for a young nobody to decide she’s going to be called by one name only, and I don’t have to go along with that nonsense.)

Speaking of Zenyatta, if I hear her say one more time that she can do it even though she’s young, I may smash the TV. Is anyone disputing that fact? That’s precisely the reason she can do it–because she’s young! What able-bodied sixteen-year-old can’t move better than people in their fifties??? That’s why ballet companies are full of young people; when they hit thirty, they’re basically put out to pasture!

That’s also why there are no old professional dancers on this show. The first season, they had an older woman who partnered with the O’Hurly guy, who should have won. But when it came to the freestyle number, she couldn’t do the lifts and throws that a much younger Kelly Monaco could, even though Kelly can’t dance to save her life. She always looked like Ruth Gordon being held up by her partner.

They also had an older man dancer, Nick something, in the second season, for an older woman contestant. (I don’t have time right now to research it all, so just take my word for it.) But because these older pros just can’t keep up with all the wild moves, they keep getting younger pros. Poor, colorless, lipless Lindsay (who’s partnered with boxer Victor Cruz,) is only nineteen!

And this full-of-herself idiotic Disney girl is a dancer! Just because no one’s heard of her before doesn’t negate all her dance training. She’s a professional dancer, for goodness sake. It’s like letting Paula Abdul compete in her prime. It’s just not fair. She’s been dancing since she was a little kid! She’s sixteen now, and has been in dance groups and music videos for over half her life! Why are they acting so amazed that she’s so good at it?! And last week, which was the first, she got “contemporary” as her dance stye, which was right up her alley! She didn’t even get a ballroom dance selection, which is what this show is supposed to be about. What’s going on here?!

I think the answer is that the powers-that-be over there feel that we’re getting bored, watching the same ballroom dances for fifteen seasons already, so they’re including other styles. But that’s not what this show is, so it’s just all looking a bit desperate, if you ask me. (Which you are, by reading this column, as a matter of fact.) It’s getting too helter-skelter.

Okay, I’m too wound-up over this whole thing, so here are just a couple of the rest of my observations over the first two weeks, followed by my predictions.

Andy Dick is surprisingly charming on the show, even though he’s not like that in person. At all. (I know because I’ve met him a couple of times. But I’m always willing to give addicts another chance. I mean it.)

What does Kellie look so old? She has that great body, so she should look young. Is it her teeth or her hair? We can’t figure it out. But we thought it was an older woman the first time she came down those steps last week, and she’s way under thirty!

Aly Raisman also looks like an old woman, but a putzy one. What’s going on here? She always looks so uncomfortable.

Could Derek Hough be any cuter???? He’s actually even more adorable with this little bit of more weight.

And he’s such a genius choreographer.

Even though it’s hard to watch poor Winona Judd, and she dances basically like a first-grader, I have a feeling she’ll be around for quite awhile because she has a big fan base, which is what the voting is really all about.

Okay, if it were up to me, the bottom two would be Sean and Lisa. And, in a surprise twist, they would both get booted off the show! I really don’t want to waste any more minutes of my life on them.

But, since life is far from fair, (and because Lisa’a partner, new pro Gleb, is downright gorgeous and has already gone shirtless,) I’m afraid the bottom two will be D.L. and Andy, with D.L. getting the hook. And in that case, I think this will be the one time a comedian on this show won’t be a good sport.