Trending
You are at:Home»TELEVISION»TELEVISION:DANCING WITH THE STARS–FINAL 5
By Karen Salkin on November 9, 2010 · TELEVISION

This eleventh season of the venerable Dancing With The Stars has been the most yawn-inducing ever. There’s nary a celeb to root for. Actually, there’s nary a celeb, period, but I’m sure I covered that topic before, pointing-out the obvious, that the show has “stars” in the title, but most of us have never heard of at least half of these definitely non-stars. 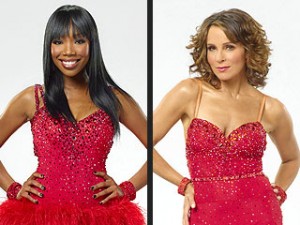 So, last night we were down to the last five competitors, paring down to four tonight. I missed most of the show for the month I was in New York, so I’m catching-up now. Mr. X pointed-out that I had many bon mots last night as I was watching the DVRed episodes, but, of course, since I was too lazy to write them down, I’ve forgotten them. (let that be a lesson to all wannabe journalists.) So, here are my new thoughts on this quintet, and some of their pro partners.

First of all, Maks is right in saying that the judges don’t give them enough credit. (Or sometimes blame.) The judges all comment as though the celebs came-up with the dances themselves! It’s really all about the pros. They choreograph, teach, and ultimately make their, for the most part, lummox new dance students look good. That’s why the same pros are always at the top–they know how to make others shine.

Second of all, I think Bristol Palin seems like a sweet girl, but give me a break that she’s in the Top 5! I smiled though her very first routine, as did she, but that was it. How many Republicans are there in this country to have voted to get her this far??? She had no fan base whatsoever, zero personality to match, and she can’t dance! I was positive they were going to judge her so low last night that it would make it mathematically impossible for her to stay, even with evil websites urging their readers to vote for her, I’m sure. (They do that to screw with every voting show.) Why did they mark her just one point behind the lovely and charming Kurt Warner, whose two numbers made us cheer???

Speaking of Kurt, he was marked extremely too low last night. His “instant dance,” (too long to explain if you don’t know about it,) was exceptional! He deserved nines for it, for sure, but received only eights. What a screw job.

When those two go, (Bristol and Kurt,) who should be fifth and fourth respectively, but who knows, we’re left with cry-baby Jennifer Gray, full-of-herself, obnoxious, too intense Brandy, and the lovable Pillsbury Doughboy, Kyle Massey, who has really grown on me. And I have to say, I’m rooting for him.

There’s no drama with Kyle and Lacey. Only fun, laughter, and real effort to do the dances properly and entertain us.

Another word on Jennifer: as someone who was a dancer who wound-up with two knee surgeries, I can feel for her. And now, since I’ve had this serious back problem for a year, I also know how frustrating it is to have the ability but not the body support to do what you know you can do. But enough with the crying about it! The funny thing is that the doctor they brought in last night, Gary Brazina, is also my orthopedic surgeon! And he always asks me if I “want cheese with that whine!” I just emailed him to ask why he didn’t suggest that to her, someone who whines much more than I ever do!

And I really want Maks to win one time because he should have with Mel B. He’s just so wonderful to watch. It’s rare to find someone so macho and so graceful at the same time. [Sidebar: I don’t know if he’s still dating his creepy partner from last season, but if he is, I’m so worried that he may pop the question as a negative reaction to the announcement that his former fiancée and fellow dancer, Karina Smirnoff, just got engaged to a muscular baseball pitcher. What a waste of man that would be! So, bite my tongue for even thinking of it.] I am worried, btw, that he may have gotten his partner, Brandy, eliminated last night by speaking his mind to the inane and should-not-be-judging-a-ballroom-dancing-competition Carrie Anne Inaba.

I also love Derek Hough and he deserves to win every time for his brilliant choreography. He makes all of his lame partners look good, no matter how old or untalented they are. And, having met him, I can tell you that he’s as nice, charming, and caring as he comes off on TV. But I really want someone else to get a chance to win this time.

So, there you have it. I hope Bristol goes home tonight, and I hope that Kyle and Lacey, or even Kurt and Anna, win this go-round. They’re the only ones with any personality, so that should count for something. And, even though Jennifer and Brandy are really the two best dancers, they’re just too dramatic for even my taste. And, believe me, I come from a long line of Drama Queens, but these two take it to a new level that even the women in my family never aspired to.

Here’s to hoping they finally get some real stars, with personality, next season.