Trending
You are at:Home»DANCE»TELEVISION/DANCE: SO YOU THINK YOU CAN DANCE—SEASON 10
By Karen Salkin on July 25, 2013 · DANCE, TELEVISION

SO YOU THINK YOU CAN DANCE—SEASON 10

First let me say that I totally appreciate Nigel Lythgoe for bringing dance to the masses in the form of SYTYCD. But my admiration ends there. He just seems so phony and into himself. It’s hard to listen to his critiques knowing that he’s going to say something raunchy to the female contestants or lauding his own show.

So, I feel obliged to share some random thoughts on the season so far, and I’m afraid it’s all negative. 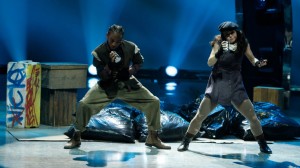 Last year, we were all disappointed when FOX cut the popular dance show down to one night, which meant that two dancers had to be devastated on the same night that they had the euphoria of performing their new number. But they coped with it well enough. And we were all happy for the dancers that they got to at least perform that one last number.

But this season, they changed the elimination to the beginning of the show! How awful of them! These poor kids had a perform knowing that it was there last time on the show. How can you perform well when your heart is breaking? I guess other people besides me complained because after the first elimination they changed it up a bit. This stupidity is that they still announced the bottom six at the top of the show, but at least they choose the two to send home at the end. Why couldn’t they wait to do it all at the end? It’s a mystery. But lots of what they do is a mystery to me. (And by the way, I’ve always known exactly who would be going, so I’m sure the dancers can figure it out too, which makes the whole show so depressing.) 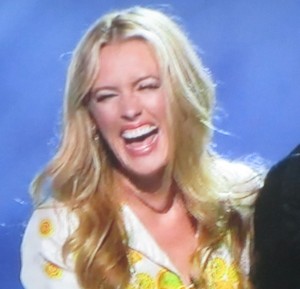 Just one of Cat Deeley’s many exaggerated faces, laughing at nothing really funny.

Cat Deeley, the hostess of the show, is so disgusting and phony or insincere. She’s very hard to watch. I have no doubt that she genuinely cares about the contestants, but every word out of her mouth, and even facial movement, complete with tongue sticking out usually, is just so Benny Hill.

And on the very first week of the show, they all kept telling the competitors that they were this or that every week. Every week!!! What? It was the first week!!! It’s as if the judges and host just don’t even listen to themselves! If they don’t, why should we?

And what is up with the inane guest judges? I used to be a Christina Applegate fan, but she’s so phony now. Her little scolding of dancer Jade was stupid, and unnecessary. But at least she’s a dancer in real life. This week, the guest judge was Carly Ray Jepson, who has nothing to do with the world of dance whatsoever. When you have people like that, what critique can may really give? It’s ridiculous. The dancers should be critiquing those people!

But worst of all time was the creepiest creep of all, Erin Andrews. She has no talent whatsoever, has nothing clever to say, and says that nothing with the most horrible, nasal, whiny voice I’ve ever heard. And I’m from Brooklyn! I know they had her on to promote the network’s telecast of baseball’s All-Star Game the following week, but they would’ve done better to have an actual baseball player on for that purpose. At least the bowlers know how to move. Mr. X said having Erin as a judge was downright offensive to us audience members. He added, “When Cat isn’t the most obnoxious person on there, you know the other person is a creep.”

Last three thoughts on the show so far this season: First of all, I don’t understand why they keep having these teenagers do so many raunchy numbers. It’s just kind of weird and creepy. At least Nigel is loving it.

Also, they keep saying that they “forget people are tap dancers” like it’s a compliment. Why do they keep putting down tap??? 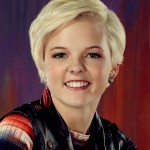 My projected winner, Malece Miller. If Peter Pan and Tinkerbell had a daughter (yeah, Tink wishes) wouldn’t this be she?

And lastly, dancers Jasmine Harper and Aaron need to stand-up straight! If former contestants Twitch and Sasha had done the number that Jasmine and Erin did on the first show, we would have assumed they were an item off the set. But Aaron doesn’t finish off one move. I’ve never seen a dancer as round-shouldered as Jasmine. (I think that’s because of her big boobs, but still.) But the powers that be have already decided whom they are going to rag on and whom they are not. So I don’t think it really much matters what the dances are actually doing in each performance. Shame.

My predictions are that Fik-Shun will be the guy winner and Malece, (the girl who looks like the daughter of Peter Pan and Tinkerbell,) will be the girl winner, with either Jasmine or Amy, and hopefully Paul, rounding out the top four. At least, that’s how it will work out if the judges get their way. And in this case, I’ll be fine with all of those results.