Trending
You are at:Home»DANCE»TELEVISION/DANCE: DANCING WITH THE STARS—ALL-STAR CAST UPDATES
By Karen Salkin on October 29, 2012 · DANCE, TELEVISION

DANCING WITH THE STARS—ALL-STAR CAST UPDATES

Over the past few days, I re-watched the entire season of DWTS, (don’t worry—I know I’m not normal; but I just love watching good, fun dancing,) and my opinions not only didn’t change from what I wrote two weeks ago, (which you can read here, if you missed it: www.itsnotaboutme.tv/news/2012/10/16/television-dancing-with-the-stars—season-15,) but were reinforced.

Just to let you know, I had planned out all the columns through the beginning of December, and this wasn’t one of them. It’s a long, complicated story, but if I added even one short column, I would have to add three, which is a lot more work for me right now, when I’m very time-constrained.

But, I’m such a believer in fairness, (of which there’s just too little in the world,) that it was worth triple the work to me to add this column, just in case it influences any of you to vote for the best duos on Dancing With The Stars tonight/the next few weeks. I know it’s not important in the scheme of the world, but since we don’t have control over much else in life, participating in making the outcome of this voter-fueled show be the correct, and fair, one would be satisfying for us all!

So, I’m going to spend time that I really don’t have right now to tell you who deserves your vote, and why. (Voting numbers included. The lines are open tonight between your time zones 8PM and 11PM. We’re each allowed eight votes per phone line. You can also vote on-line, too, but I’m not sure how, so I guess just go to ABC.com.)

[Note: I loved that last week, when they did team dances with four couples each, they actually divided themselves into the four I want to wind-up in the semi-final, (also known as the ones who deserve to, as they’re the four best dancers,) and the four creepy duos, whose lack of motor skills was apparent to even the casual observer in the Gangham Style routine that quartet performed. It was worse than a hot mess! At least the judge’s marks reflected that, even though they didn’t mark that debacle quite low enough.] 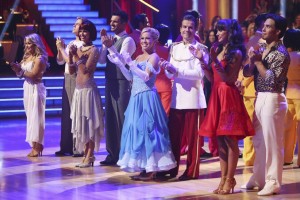 The four deserving couples: Shawn and Derek, Melissa and Tony, Sabrina and Louis, and Apolo and Karina.

Okay, I’m going with the four deserving couples first. They are, (in the order I’d love them to finish): Sabrina Bryan and Louis Van Amstel, Shawn Johnson and Derek Hough, Melissa Rycroft and Tony Dovolani, and Apolo Anton Ohno and Karina Smirnoff. Those four pairs are all comprised of excellent dancers, great sports, fun personalities, and plain nice, talented folks. (We’ll get to the bad choices later, with no numbers!)

Sabrina and Louis: 1-800-868-3403 This girl got screwed royally the first season she was on the show, and she deserves better this go-round. Not only is she a great dancer, and a fun performer who gives it more than her all, she’s so nice! On the week that each team chose a style for a competitor to dance the following week, she was faced with the choice for Kirstie and Maks. Louis told her, “If you want to hurt them, chose Rock and Roll,” and before he was even done uttering those words, Sabrina said, “No no no!” And she chose what was really the easier dance for Kirstie, even though not one person on the show mentioned that part. What a nice girl. She chose the style to help her competitors! Not one other couple did that!

Shawn and Derek: 1-800-868-3402 These two are just having the time of their lives together!!! Pro dancer Derek started out the season looking perplexed as to what to do with a young ‘un, (since he seems to always connect with his much-older partners better,) but now we see the joy he gets out of having such a beyond-able partner.

And Shawn is a great partner; she appears always eager to learn, work hard, and try anything. Even the second, and third, and fourth, (…) times I saw their quickstep on Iconic Dance Week, I couldn’t help but cry from their incredible accomplishment. This wasn’t a slow, emotional routine that should have elicited that response; quite the opposite, actually. But such perfection is emotional for me. (I wound-up crying from their awe-inducing mambo the following week, as well.)

[One note about just Derek: He’s truly amazing. He tempers his choreography to show each partner off to best advantage, and it’s always different. He can work with young, old, physically able and challenged alike. He’s the most talented person I’ve ever met; he not only dances and choreographs, but he sings and plays guitar. And he’s adorable, incredibly nice, and personable. How much more can one person be?!

Melissa and Tony: 1-800-868-3406 With all of Melissa’s super hard tricks, (remember, she’s not twenty-year-old Shawn,) I’m shocked that she didn’t injure her neck sooner!!! Even with a herniated disc in her neck, she still danced last week! And better than almost anyone else! Very impressive.

Apolo and Karina:  1-800-868-3407 I really don’t think he’s going to repeat his Season Four victory this year, but it’s not for lack of trying. He’s one of the hardest workers on this show. And he’s always upbeat and supportive of his competition.

The half of the remaining cast I don’t like are comprised of over-inflated ego-ed no-talents:

Gilles Marini and Peta Murgatroyd—Just who is voting for Gilles Marini??? He’s so creepy and full of himself and phony. And he’s a bad sport, and affected. I’ve never seen him anywhere except for this show, both seasons, so this is all my opinion is shaped by. So, since he’s not really famous, I can’t understand who’s voting for him. He’s not a “star” by any stretch of the imagination; he’s barely even a working actor! He must have one heck of a management/publicity team. I don’t know how he got on this series to begin with! He was naked in a movie for a second? Is that it? (And trust me, in my limited experience with naked men, I’ve seen way better. Almost every time!!!)

On the week of this all-star season that they each had to pick a dance that was performed by someone else on a previous season, he was the only–I repeat, the only–bad sport!!! What he carried on about Apolo Ohno choosing his tango was just spoiled brat-like. The others said they were “honored” to have had their dances chosen, but Gilles didn’t stop ragging on Apolo for choosing a tango that Gilles and Cheryl had done previously. And he’s such a coward that, when asked about his taped disrespectful comments on the live show, with the rest of the cast sitting behind him, he totally avoided answering. He was fine talking trash when no one was around, but totally wimped-out with Apolo and company right there.

And Gilles’ “creative idea” on Creative Dance Week was to enter in a flying harness? How does that make the dance creative?!

He thinks he’s so popular and admired, but if he were all that, wouldn’t he have some starring roles already?

What a complete douche Gilles is! So, I repeat, just who is voting for him??? Are there that many French people in the USA???

Emmitt Smith and Cheryl Burke—Watching the entire season again, I realized that Emmitt definitely dances well enough, and I give him props for always giving it his all. So, why do Mr. X and I always root against him? I think because of his braggadocio. It was beyond obnoxious when he stated, with a derogatory laugh, that he’s not worried about “an actor, a race car driver, and a speed skater.” So rude.

Kirstie Alley and Maksim Chmerikovskiy—I’m just sick of Kirstie’s put-on squeaky-voice, her filthy hair and bad teeth, and of her trying to be funny all the time. On her first season on the show, she was often humorous, and it was good to see Maks enjoying himself again. But now it’s old and forced. Enough of them already. And, how does she have a diet-food company??? (It’s billed as “an easy weight loss program that actually works.” Yeah, right.) She’s gained back all the weight she lost dancing two seasons ago, and then some!!!

Kelly Monaco and Valentin Chmerikovskiy—these two are just downright creepy. Get a room already. Or share it with your girlfriends. Or take it to a club. But please stop nuzzling and tickling each other on my TV! I want to vomit. And when Kelly emphatically stated, (after their sex dance a couple of weeks ago,) that “this show has absolutely nothing to do with dancing,” she showed herself to be a ninny, at the very least. Is she insane??? A dance show has “absolutely nothing” to do with the art??? Perhaps not for her, since she can’t do it, but I’m sure for those of the participants who are working their tootsies off learning it! And the choreographers. And the people who watch it because they love dance. For Kelly, who started out nude in Playboy, I guess she thinks it’s about sex, since that’s what her career has been. As I said–creepy.

So, if you’re sitting around with a few extra minutes tonight, please vote for those top four whose phone numbers I gave you. I swear, you’ll feel a drop of happiness from trying to make just one tiny thing be fair in this world. (The numbers stay the same all season, so you can use them again every Monday night through the Final.)