Trending
You are at:Home»TELEVISION»TELEVISION: THE BACHELORETTE NONSENSE
By Karen Salkin on December 14, 2020 · TELEVISION

I admit it—I’m ashamed of myself for not only watching this debacle, but writing about it!  I had no plans of doing either, but that’s my pandemic brain for you!

In the (what seems like) two-hundredth season of The Bachelor and The Bachelorette, (and assorted spin-offs in the franchise,) this is the only season I’ve ever watched. Okay—I did watch one episode of the season that some villain I’ve forgotten, (I’m sure we all have,) broke Ashley Hebert’s heart, and J. P. Rosenbaum mended it. I tuned in to that one episode back then because the promos showed the dude being such a d**k that I could not believe what I was seeing. (He told the camera, “I’m going to make Ashley cry, but I hope my hair looks okay.”) So, of course, I had to see if the girl recovered. But none of that drama hooked me on the show. 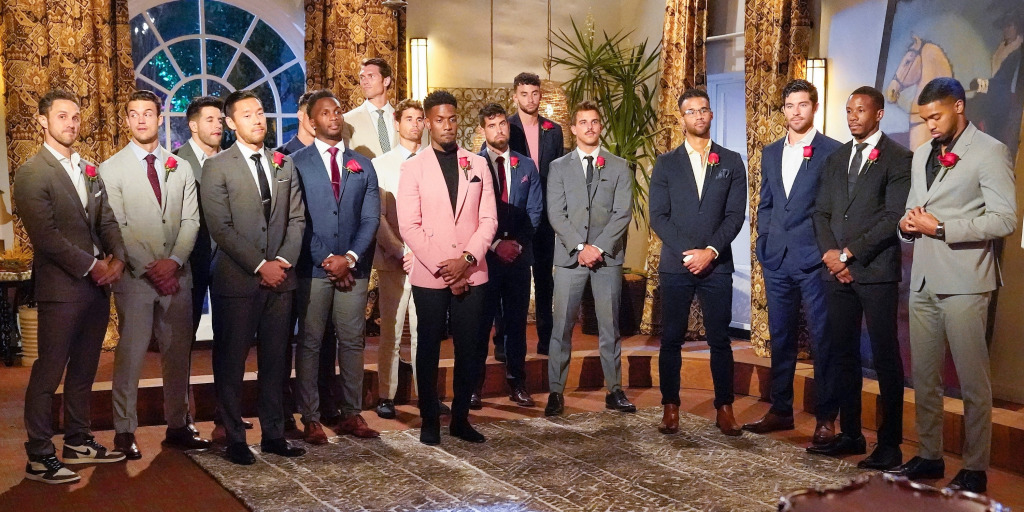 Sixteen of this season’s would-be suitors.

So, here we are, nine years later, and I decided to watch the first episode of the season because of all the rumors that the first woman, Clare, had left the show. (And also, because the pandemic has given me the time to watch crap.)

And then the drama of Clare falling in love with the only good-looking guy, Dale, at first sight, got me to keep watching. And here’s the shock of all shocks—I roped Mr. X into doing it with me, even though he can’t believe what stupidity this is. (His exact quotes are, “It’s a complete stupidity,” and, “It cheapens romance,” both of which assessments I totally agree with.) 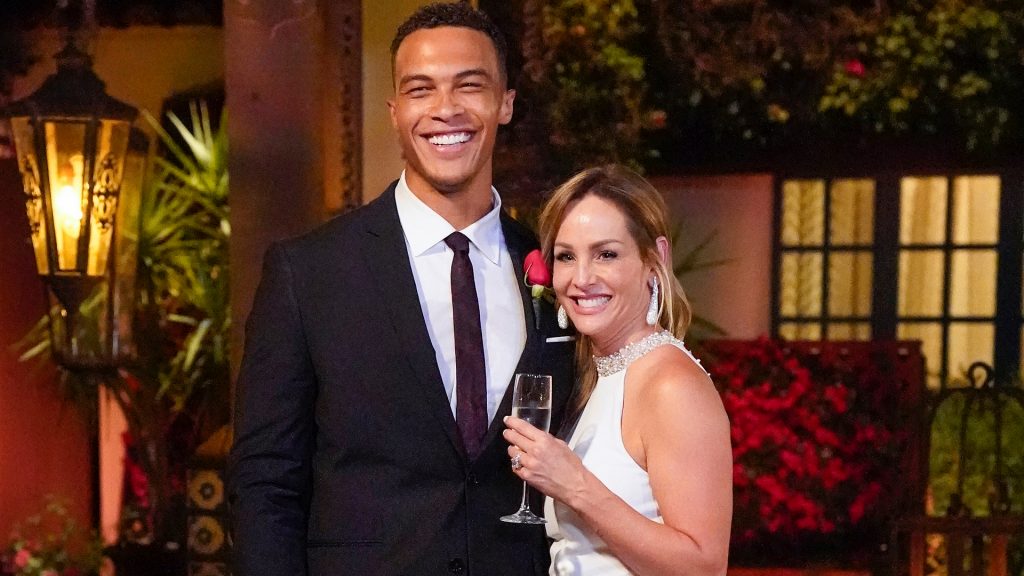 Once we started on the show, we were planning to watch the series just until Clare left and the new girl, Tayshia, came on. But by then, we were so amazed at how idiotic it all is that we just couldn’t give it up at that stage. (By the way—I actually respect Clare for leaving when she fell in love—she did not want to have to make-out with strangers she doesn’t care about, which, if this season is any indicator, the producers seem to require. So, good for her.)

I don’t know how anyone can even do that to begin with. A few years ago, my best friend would tell me she kissed blind dates at the end of the night, whether or not she was attracted to them. The first time she said it, I hadn’t even finished asking how she could do that when she resolutely answered, “Alcohol!” We laughed like idiots, but she said it was true. Maybe the reason I can’t understand the concept of kissing people about whom you’re not feeling romantically is because I never drank, so I’ve never had to kiss a frog. (My best friend in high school, an older girl, did once make me kiss her boyfriend’s friend, whom I had been dating for over a month, but was not at all physically attracted to, just so we could keep on double-dating. I really could not bear to, but, for her, I tried, and almost threw-up!) [Note: I just realized—Clare doesn’t imbibe, either, which may be why she couldn’t kiss those guys she wasn’t interested in. That’s yet another reason people should not drink.]

Even Mr. X, a dog of a guy back in the day, can’t believe that Tayshia is making-out with one guy after the other, back-to-back, and so voraciously, to boot!!! He said the show should be called The Ho, not the The Bachelorette.

And really, she keeps saying she’s falling in love, so how can she be kissing so many others? And she’s usually the one throwing the mack down; the guys are not the ones initiating the make-out seshes. 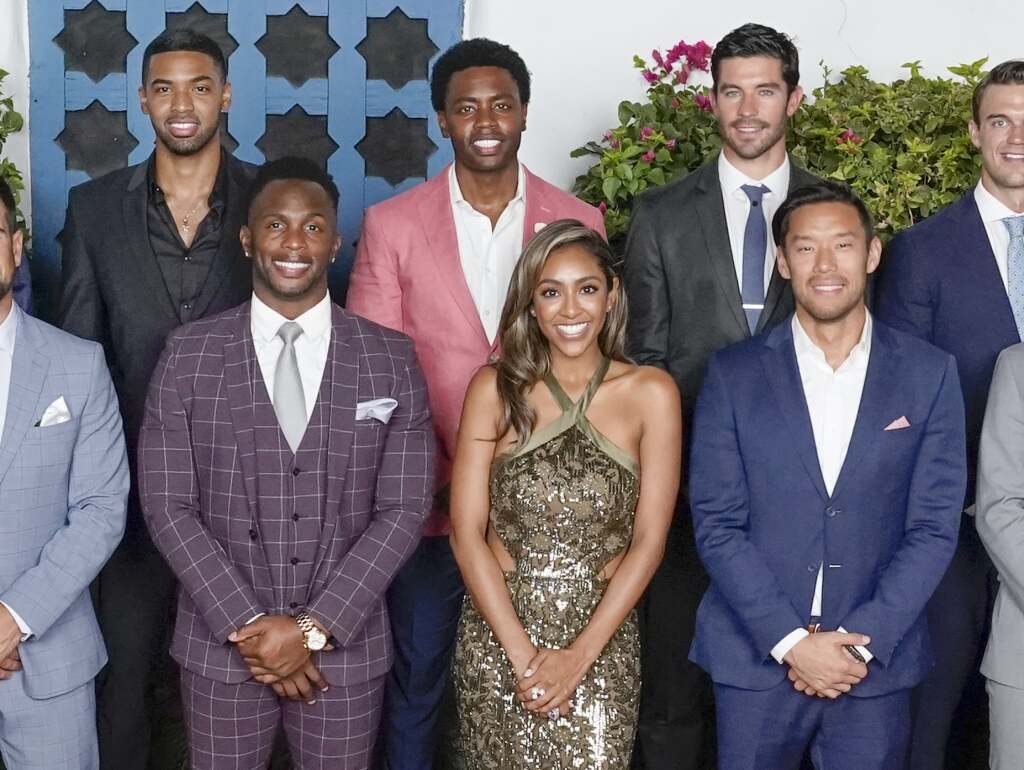 Tayshia Adams and some of the contestants. Only the two on the top corners are still in the competition.

The truth is, out of the entire forty-two guys this season, (thirty-eight originals for Clare, and four new ones they added for Tayshia, because Clare had eliminated a few,) the only one I could have possibly kissed is Dale, Clare’s now-fiancé. Eazy and Ed are funny, (and both gone now,) which I love, and Brandon is so sweet, which I admire, but I still have not found any of them to be particularly attractive. (They all do have killer bods, though!) And the desert heat (the show was filmed in Palm Springs…in July!,) is not helping any of them—most of the guys have looked greasy/sweaty since Day 1.

So now, with just a few episodes left until the finale, which I understand is supposed to feature her two favorite guys, one of whom she picks to marry, (which is so weird—even typing it is surreal,) she’s really painted herself into a corner. As of now, each of the septet of remaining guys, (all her choices,) has a crazy issue or two! One has tried to commit suicide, not once, but twice!; one’s a recovering drug addict; one’s father is seventy-five, which seems to bother him a lot, since he’s only twenty-six; one’s not sure he really wants to get married…again; and one has such severe, bad, crazy family issues that he changed his name! Not just his last name—the entire thing! (And one is just a crazy Canadian.) What a choice for her. She keeps thanking them all for “opening up” to her, but in just about all of those cases, I would have thanked them to keep their troubles to themselves! [Note: Tayshia, or the producers, eliminated an alleged sexual assaulter before it got to this stage. Whew. But how did he even get on the show to begin with??? Don’t they vet every applicant to the nth degree? They really should.]

She also has on tap, (maybe only until tonight,) perhaps the douche of all douches–Bennett. He is possibly the most intelligent one there, having graduated from Harvard, but he’s so smug and creepy. He showed-up on the very first night with a giant white scarf hanging down the front of his suit, (à la Jon Voight,) which would have made him the first to be eliminated by me! And how did he get back there to begin with after Tayshia sent him packing??? It’s clearly a producer-orchestrated situation. So stupid. 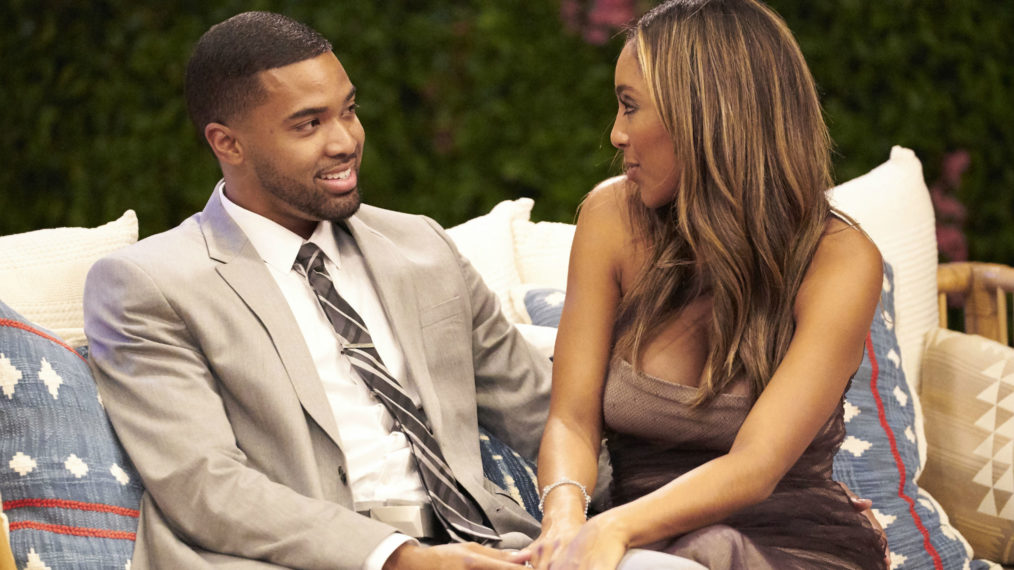 Ivan, with whom I hope Tayshia winds-up.

Having never seen this franchise before, I don’t know if all the actual bachelors and bachelorettes are this bossy and hyper-sensitive, insisting that people open up to them and not gossip and not say anything bad about the others, but I certainly hope not. When Tayshia found-out that older Harvard grad, Bennett, had told young kid Noah that she wouldn’t choose him, she went nuts, reprimanding Bennett for “questioning her integrity.” How she came to that out-of-left-field conclusion is a mystery to Mr. X and me. Either the producers told her to say it, (because someone else is clearly pulling all the strings,) or she is not too bright, and thinks using those words together in a sentence makes her look intelligent. Either way, what he was doing to Noah had nothing to do with Tayshia to begin with, and most certainly had zero to do with anyone’s integrity!

The most burning question of the season for me is not who will Tayshia wind-up with, but why she thinks her name is “Tay-sha!” From the spelling, it’s clearly “Tay-shIa,” so has she been mispronouncing it wrong her entire life? I’m not kidding; I really want to know. (Growing up, our neighbors had written their newborn daughter’s name “Joel,” meaning for it to be “Joelle.” My English and Speech teacher parents had to convince them that the correct spelling is “Joelle,” and if they didn’t change it, their daughter would be teased for having a guy’s name for the rest of her life! Thank goodness for the girl that they listened. So perhaps Tayshia’s parents would have benefitted from living on our block, as well. Just sayin’.) 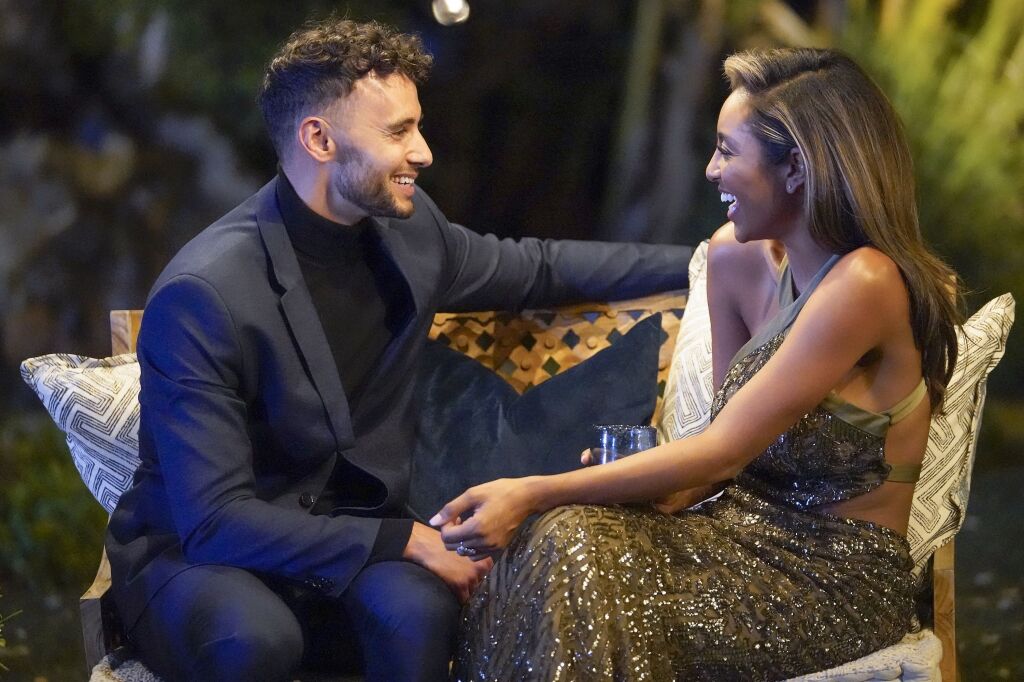 Brendan, who has grown on me all season, is my other choice for her.

And if she says “honestly,” or “if I’m being honest,” one more time, I may break my TV! (Jimmy Kimmel even called her out on that habit, but perhaps a bit more tenderly than moi.) Perhaps the guys should all be worried about her, since it sounds like she’s admitting that she’s not always being honest!

All that being said, I kind-of like Tayshia—she’s cute-looking and she laughs genuinely and often. And in the group hangs, I think she makes most of the guys feel comfortable. (Even though I’ve always been boy-crazy, I don’t think I’d enjoy being so close in proximity to so many males looking at me like they want to devour me. I went through all that in my clubbing days, when I was too nescient to let it bother me, but after a couple of weird experiences, I couldn’t bear to go though it again. Trust me.)

And now they’re going to have “hometown” visits this week. But, since no one should be traveling at all this year, they brought the families to the resort, instead of the girl to the guy’s hometowns. Since everyone needs to quarantine for at least two weeks after traveling, did they bring everyone’s families there, only to tell some of them to just go home? And why is this show even on in a pandemic?! I really want answers to all of this!

And lastly, I must say that I totally agree with early-eliminatee, and villain, Yosef that this show is totally degrading. They had the guys strip down to just tiny underwear on at least two occasions, and some even wound-up naked in front of Clare!!! It’s basically fraternity hazing, which is illegal in some places. It’s rude to the guys, their families, and even some of the viewers. It’s not good clean fun—it’s absolutely creepy. And unnecessary. I feel bad for everyone who needs to resort to being on the show for their various reasons, most of which have more to do with their careers/social media followings than with finding love.

I can promise you that I will never watch this series again, even for the comic value. (And it really is a riot, just not for the right reasons.) But first, I can’t wait to see the rest of the nonsense of this season!