Trending
You are at:Home»TELEVISION»TELEVISION: DOROTHY HAMILL LEAVES DANCING WITH THE STARS
By Karen Salkin on March 28, 2013 · TELEVISION

This column is sort-of a combo of the last two, with DWTS and skating being the topics!

I swear, I had a feeling that Dorothy Hamill would drop out of Dancing With The Stars the other night, but I didn’t want to print that hunch because I was hoping that I was wrong, and didn’t want to jinx her. But Mr. X is my witness. 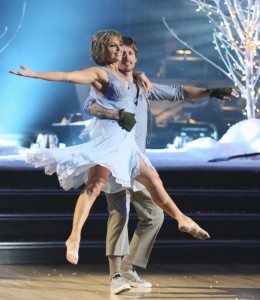 Dorothy Hamill and her pro partner Tristan McManus dancing a contemporary routine on Week One. Note those beautifully pointed toes!

Dorothy is one of the nicest people I ever met, and this is such a shame. You could tell she really wanted to be a part of this show for much longer than two weeks. And with her giant fan base, and elegant movement, I think she could have made it to at least the Top Three. I just wish she would have been given the waltz to go out with, rather than the way-too-hard-for-her-back jive. (Sadly for me, I know what it’s like to try to move with severe back issues. I haven’t been allowed to exercise for three years now because it could cause permanent damage. Ugh. She really needs to have it taken care of care of, pronto, like I would mine if I didn’t have all the New York problems to deal with.)

I first met her way back in the day, when I was the host of a funny New York contest event at a nightclub in West Hollywood, and she was one of the three judges. (The other two were her beau at the time, the hilarious Dale Gonyea, and Mr. X. They were terrible judges, by the way, because they were all so nice, and couldn’t bear to disappoint anyone.)

I’ve bumped into her here and there over the years, including one summer in Aspen with my little mo, and she’s always the same—steady, kind, and cheery. My mother was thrilled to meet her. She said that Dorothy was so normal, she didn’t even realize who she was at first, and thought she was just one of my basic L.A. pals!

And she’s still so talented. Her straight back is the standard for ladies figure skating lines till this day, and I wish more of the girls would learn how to skate like that.

I also have to state that Dorothy wears her heart on her face, so we always know just what she’s feeling. The other night, a pal who’s not that familiar with her asked me what’s wrong with Dorothy. I started explaining her health issues, and the woman stopped me, saying she meant why does Dorothy seem so crazy. I finally realized she meant why does Dot make so many weird faces. It’s really just her insides expressing themselves on her outside. And her myopia; she’s been squinting since she was a teen-ager. I assume that by now she wears contacts, but she still always squints. I guess no one can be all perfect!

So, I was looking forward to a happy season of Dancing With The Stars, featuring a long run by Dorothy Hamill. (And, hopefully, a very short one by that creepy Vanderwhatever woman and even creepier Bachelor nerd.) But now we’ve lost our Ice Princess.

It’s so sad, but that’s totally Dorothy—to sacrifice herself in time to save someone else. She could have easily tried to gut it out even one more week, when she was bound to get a slow, easier dance this time, (being that the theme is “Prom Week,”) but she didn’t want someone else to have to be the first to go when she knew she’d have to quit soon anyone.

So, Dorothy, I hope you feel better soon, and that we’ll see your shining supportive face in the audience on subsequent shows. I’m sure that everyone over there is happy that you’ll always be in the DWTS family now.