Trending
You are at:Home»DANCE»TELEVISION: DANCING WITH THE STARS SEASON 12 PREMIERE
By Karen Salkin on March 25, 2011 · DANCE, TELEVISION

DANCING WITH THE STARS SEASON 12 PREMIERE

I would have posted this review the day after the seasons premiere, but I wanted to take a day to process what I saw on Monday night. And then Elizabeth Taylor died so I felt the need to pay tribute to her, and then Chris Brown apologized, which brings us to now. And, as I totally predicted every bit of last night’s American Idol shocker, from Casey being the bottom one to his save by the judges to all eleven of them going on tour (Mr. X is my witness,) maybe we should take my insights on DWTS seriously, too.

With four days’ reflection on the celebrity dance show’s twelfth season premiere, and two more viewings of it to make sure I’m being fair to all the contestants, not one of my opinions has changed, and of course, I want to share them with you.

Once again, we have no idea who most of these “stars” are! I was trying to explain them to my little mo, and I had to do research on half of them! Deep research. I have more credits and Google entries than a lot of them! 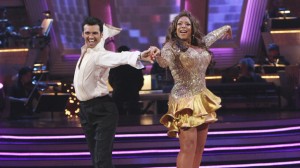 I’ve never seen this Wendy Williams person before, and I hope never to again. Before I saw that they had paired her with Tony, I thought it was a man in drag. (I still do, actually.) Her looks are not her fault, so I feel bad for her in that category, but her behavior is. The single rudest thing I’ve ever seen on this entire series, in all the seasons, was that creepy person meeting her pro, the totally-more-famous-than-she-is Tony Dovolani, and asking him, “What’s your name?” I’m still livid over that!

First of all, on that topic, he’s so much more famous than she is, (as are most of the dancers vis a vis their “star” partners,) and second of all, when you know you’re doing this show, if you’ve really never seen it before, (which, if you consider yourself to be a “media personality” is shameful,) do your research on the pros!!! And, at the very least, fake it! It doesn’t make you more powerful than someone if you don’t know them!!! (That’s a lesson that many people can learn, but it’s shocking when someone supposedly famous does it.)

On top of all that, the woman can’t dance! Tony looked miserable. He also looked like he was trying to dance with the mother in Hairspray. (The role is always played by a male, in case you’re not familiar with any version of the musical/movies.) He probably didn’t think it could get worse than Kate Gosselin in the partner department, but it did. They really owe that guy, big-time. I pray that this annoying person is the first to go. (I think that Tony does, as well.) I can’t even look at her. I also think that the fact that they showed Williams dissing Tony like that, as soon as she met him, means that the producers think she’s rude, too, or else they wouldn’t have let us see it. [Note: upon the second viewing, though, I just felt bad for her. But I can’t take back my previous assessment.]

Speaking of bad looks, I really expected Kirstie Alley’s dancing to be a train wreck, as she is in general. I’ve been so depressed for Maksim to be saddled with yet another lummox, as he’s been several times before. (Not last season–he definitely should have either won, or at least, made the finals with Brandy.) But Kirstie’s dance was really fun, and Maks made her look good. It was a shocking, in a good way, finale to the season opener.

The rest of my deep thoughts are in order of performance: 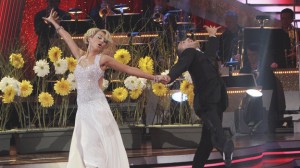 Chelsea Kane, though being a total stranger to just about all of the viewing audience, was quite good, especially with Mark Ballas’ brilliant choreography of this bouncy fox trot. Their number was the perfect one to begin the competition with, both for them as a first dance, and for the whole show to have as the first dance of the season.

Hines Ward was excellent. Except his head looks like when the NBA broadcasters on TBS super-impose Charles Barkley’s head on other bodies as a joke. It’s too big for his body. (I feel for him about that, because mine is too small for my body. Really. And with my super-long neck, my head looks like a peanut on a stick. To me, anyway. But who’s perfect?) 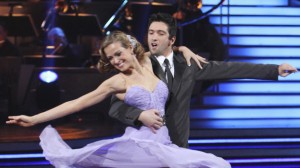 The loveliness of Petra Nemcova shines through at all times.

I’m rooting for Petra Nemcova all the way. She’s absolutely lovely, and having survived the Thailand tsunami, in which she lost fiancé and suffered a broken pelvis after having to cling to a tree for eight hours, (not to mention also surviving dating James Blunt for awhile after,) I always want her to have every happiness she can. I’m so glad she got the easy-going Dmitri Chaplin as her patient partner. If she weren’t engaged to someone else, as a matter-of-fact, I’d love them to wind up together. She’s the nicest, classiest person who’s ever been on this show! Which means she may be the first to leave, unfortunately, which would be a crying shame. Except, after all she’s been through in her short life, I have feeling this whole experience will just roll off her back and she’ll be most gracious about being eliminated.

A note to [fill in your own negative adjective here, like annoying, full-of-herself, unknowledgeable, etc.] judge Carrie Anne Inaba: enough already with your stupid having to penalize them for a foot coming off the floor. That is not a lift! A lift is on purpose and those are banned from this show because it gives the younger folk an advantage, as well as the duos where the male is the pro. If a foot comes off accidentally for a second, it does not matter! Not even one iota! So, come off your high horse already . You’ve never danced ballroom in your life, so even the worst dancer on this show is better at it than you–even Master P!

Pro dancer Chelsie Hightower, who’s paired with hip-hop singer Romeo, looked different in the face, which lead me to think that possibly she had had a very unnecessary nose job in-between seasons. (I’m actually just about positive about it, but I’m just being nice to only suggest it.) If I’m correct, why in the world would she do that??? She looks so weird now. And this isn’t about me liking big noses, which I usually don’t, even though I have one. But a bad nose job is soooo much worse than a bad natural nose. So many of the pro dancers have now had nose jobs since they began on the show; Karina Smirnoff has had at least two, Kym Johnson, who didn’t need one at all, has had at least one, and even the gorgeous Edyta had one last year! What’s wrong with these people?! I think the only two females left in show business with their own noses are Meryl Streep’s daughter Mamie Gummer, (who stars on the same network’s Off the Map,) and me! And we’re the two who need it the most! But we look like ourselves and have not done too badly in life anyway.

I, surprisingly, like Romeo. He was very funny in a low-key way. I expected him to be a jerk, like his dad, the aforementioned Master P, was on the show. I guess he really is trying to avenge the family name. 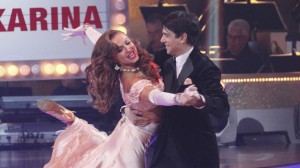 Mr. X and I were screaming during Ralph Maccio’s performance–it was so unexpected! He was delightful, (an adjective I don’t think I’ve ever used.) From the rehearsal package, we thought he was going to be awful, and then he pulled-out this absolutely charming dance. We loved it. And, most importantly to me, I was happy for my little mother because the only “star” she knew was Ralph, due to her obsession for My Cousin Vinny. Thank goodness he looks exactly the same as he did back then, with either weird hair or a weird toupee! (Upon further viewing, I think it’s actually a comb-forward, as opposed to a comb-over.)

Lacey’s dark roots were so distracting. If she wants to return to being a brunette, which she should, she should at least color the rest of her hair, that’s not the roots, brown. That’s what I did when I once had what I called “tiger stripe” hair, due to too much coloring. 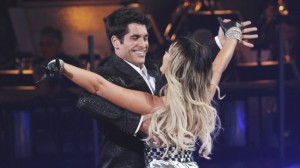 Note not only Mike's cute visage, but Lacey's distracting roots!

This Mike Catherwood guy, though I can’t find one person who has ever heard of him, was kind-of charming. When he wasn’t dancing. He was funny and self-deprecating. And has a cute face. I have a feeling he’ll be the first to go, even though it should rightfully be the he-she Wendy Williams. They need his wit on the show, though, so I hope he lasts a while longer.

I guess we’ll find-out next week. At least they’re giving this cast two dances before one of them has to go, which they haven’t always afforded to previous casts. So, at least their hard work won’t go for total naught.