Trending
You are at:Home»TELEVISION»TELEVISION: DANCING WITH THE STARS AND THE VOICE SEASON FINALES
By Karen Salkin on May 21, 2014 · TELEVISION

DANCING WITH THE STARS AND THE VOICE SEASON FINALES

There was so much going on last night, competition show-wise! It was a juicy, pretty entertaining night.

I can’t remember the last time my picks actually won these shows! And on the same night, no less. Mr. X and I went to bed elated last night. We’re such fans of fairness, and these victories were just that. (I’m sure that by now you know the winners, but in case you don’t, this is your spoiler alert.)

And I actually predicted both winners about two months ago! (Search my archives for exact details, if you want to check-up on me.)

As important as the correct people winning, is the fact that so many people had the time of their lives competing on these shows. It appeared to be happy situations everywhere you looked.

So, let’s to get to my many thoughts already, before the next seasons begin!

DANCING WITH THE STARS—SEASON 18 FINALE 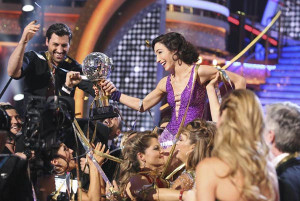 Meryl and Maks, in the throes of the rightful victory.

The first good news I’ve gotten in a very long time is that Meryl Davis and Maks Chmerikovskiy won this season. That was only fair, and so well-deserved. They were perfect together! I’ve never seen Maks so happy, tame, and being able to dance full-out because he finally had a partner who could dance.

And it was a true team effort, not just pro-student. I think we all cared more for Maks to win than for the supposed star.

The whole cast seemed elated over the win, too, even runners-up Derek Hough and Amy Purdy. As much as I’m sure Derek wanted the victory for his partner, I have a feeling that he would have been embarrassed if he had won for a sixth time! (It also would have been three in a row, which would be just depressing to everyone else already.)

All that being said, I have to be honest and point-out all the production foibles of what should have been a glittering production all the way around, but was so disappointing, aside from the outcome.

First of all, I felt like this was somewhat of a joyless, focus-less finale. It was just missing something. They didn’t feature the other contestants enough. Each one should have come out in the order they were eliminated, and performed a quick number.

And a couple of times, we joined the show in progress, like with Meryl and Charlie’s number (see the next paragraph,) and one from Amber Riley, as well. That wasn’t fair to the viewing audience.

After promo-ing that Meryl Davis and Charlie White, the team who won the recent Olympic gold in Ice Dancing, (and both competitors on this show, though this time against each other,) were going to perform together off the ice for the fist time ever, they totally cut-off their number!!! I was desperate to see it for over twenty-four hours, (as I’m sure their many fans were, too,) but the show came out of a commercial break, and there the duo was, in full swing, with just a few seconds more to go! It should have been one of the highlights of the show, but they gave it unbelievable short shrift. And then they said something like, “That was Meryl and Charlie…,” like the CBS airing of the Macy’s Thanksgiving Day Parade does as we see the back of the floats go by on their network, because NBC has the rights to show the real production! It was ridiculous. But they made time to show two minutes of “highlights” of the worst co-host in history, Erin Andrews, being her usual boring self. Not fair.

Erin is way too dreadful to waste any more of my time on discussing, except that I have to point-out that she’s the Randy Jackson of this show; she just repeats what others, mainly host Tom Bergeron, have just said. They better not have her back on next season. It appears that the majority of the show’s viewers hate her, too!

It’s also stupidity to add-on that extra dance [the final three couples have to perform one more dance for marks on the finale] to what should be only festivities; the judges don’t give real marks, only finale-enhanced ones, so it’s crazy. (But last season, they did choose to screw Corbin Bleu over his last dance, thus making him be the runner-up to Amber Riley, when he by far deserved the win.)

Yes, Amy Purdy is inspirational, and amazing, and a true athlete/hero. And Derek is indeed what Kenny Ortega called him last week–the “choreographer of his generation.” But Meryl is a better dancer, and she and Maks together were the better couple. So, yay, M&M!

Last thought on this one, (for now, anyway): As we were getting into bed last night, Mr. X, (a dancer himself,) said, “I think that this is my favorite win.” That made me so happy because we often go to bed disgusted after these show finales, like when Adam Lambert lost American Idol to Kris Allen. (Who?) 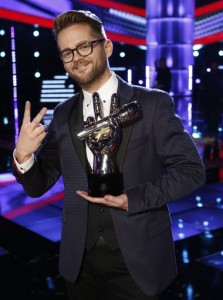 Mr. X and I watched this show right after we finished DWTS, and were downright giddy that, with Josh Kaufman’s victory, we were two for two!!! And Josh was perhaps the most gracious winner ever.

It was a pretty good show along the way, as well. I actually loved when the three finalists got cars. They all had fun reactions.

And yes, I’m also glad that a coach other than Blake Shelton and Adam Levine finally got a win on this show, but what Usher had to say before the announcement was just weird. He said, “First and foremost, there’d be a new coach winning.” First and foremost?! It’s about the coaches??? I thought it was supposed to be about finding the best new “voice!” Silly me.

He continued, “And furthermore, the integrity of this show will once again stand.” So, the show isn’t honest if Josh doesn’t win??? I wanted him to win desperately, but those are horrible, and ignorant, statements.

Last thing on this one, too: I was joking to Mr. X that when Robin Thicke was going to perform on the finale, he was going to make them all sing the “get his wife back” song. And he did!!! That’s the duet he sang with Josh!!! I was laughing, and I think so was Josh. As I tweeted after this past week-end’s Billboard Awards, how about this, Robin?; forget the song to get her back; how about just don’t stick your finger up some strange girl’s cooz. That might do the trick.

And on that delightful note, I’ll await tonight’s American Idol finale, and root for Caleb, even though I tried voting for him for hours, and never got through even once!