Trending
You are at:Home»TELEVISION»TELEVISION: AMERICAN IDOL—SEASON 13 FINALE
By Karen Salkin on May 22, 2014 · TELEVISION

I’m three for three!!! (All my contestants won on the three competition shows this week. If you missed yesterday’s review of the other shows, you can read it here: itsnotaboutme.tv/news/television-dancing-with-the-stars-and-the-voice-season-finales.)

And while I’m congratulating myself on the multiple wins, let me also laud true rocker Caleb Johnson for the much deserved victory last night. He was always natural and not putting on any phoniness, neither in his performances nor his chats. Well done! You go, boy!

If it’s true that it’s not how you start, it’s how you finish, then this season of American Idol worked out. It was the weakest season all along, in every way imaginable, (especially with the host and judges trying to be all chummy, a la The Voice, and involving social media way too much,) but it ended strong, with a fun performance by the judges, and the correct winner. 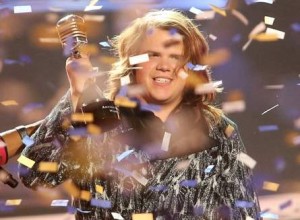 [As I wrote my notes in real time, I noticed that I was writing more in-depth about this finale than the others, and at first I wondered why. Then I realized it’s because I didn’t really care about the outcome of this one, (I really wanted Caleb to win, but I wasn’t going to take to the infirmary if he didn’t, as I would have if the other two shows hadn’t produced the proper winners,) so I could just relax and take notes.]

The show in general just seems so tired. Finale night in the first several seasons was such an event. It seemed everyone in the country was excited about it. There was always an electricity that night. But now it just seemed so sad. And lackluster. And sort-of an afterthought. Mr. X didn’t even know it was on!

Even the Taylor Hicks–Katherine McPhee finale was more sparkly. They didn’t even dress-up the two last night! They looked like slobs. (I’m sure that’s what the powers-that-be over there were going for, in their on-going efforts to be young and hip, but it was just wrong.)

Also to that end of trying to make the whole thing so young and what they think is hip, it’s so creepy that they stack the audience, especially the ones standing in the front, with kid “stooges,” and make the contestants, (and judges…and even Ryan Seacrest!,) touch hands with all those strangers! It’s so disgusting and unhygienic.

Why would Jessica Meuse and Jennifer Nettles sing Wrecking Ball???  What kind of weird choice was that?! And whose was it?

And poor Jess–I like her and think her face is beautiful, but she has no stage presence whatsoever.

Jessica and Caleb must have each gained at least twenty pounds during the season!!! So, I guess this show has some excellent craft services people! Or at least ones who don’t serve any diet food.

Now I see why JLo doesn’t usually sing live. And she used to dance better, too.

Why a duet with Kiss for Caleb? To me, they’re just a sad bunch of old men. Gene Simmons just kept sticking his gross tongue out the whole time. And, as much as I enjoy Caleb and wanted him to win, Kiss’ performance with Adam Lambert a few years ago was so special that the producers should have found someone else for Caleb, like Aerosmith, which would have also kept it in the family.

Could that “lip-reading” bit have been any more stupid?  Better to fill that one minute with dead space than to air something so idiotic that added absolutely nothing to the proceedings, and was confusing, to boot!

Aloe Blacc sang like crap. I guess he didn’t want CJ to be the worst one on the show for once. But all the guys sounded awful on that song. It sounded like a bad high school dress rehearsal. It was so bad that I’m shocked that I wasn’t in it!  (I sing even worse than Ryan does.)

What was that dead rat on Demi Lovato’s head? (Now I’m back!!! It took me a little while to be me again, but I think I just got in the swing of things.)

American Idol finales was so much better when they used to surprise us with the finale acts, and not promo them the week before in a desperate attempt to get people to watch.

The audience members seated behind the judges are view-obstructed to begin with, but then the idiots stood-up to block them even more. Very considerate of them.

I was hoping that none of the contestants would come out and ruin John Legends performance, and at least we got one quick song of him uninterrupted by a lesser “singer.”

All season, the producers shoved nauseating shots of Malaya’s wet nostrils and braced teeth down out throats, but now that the braces are off, and the make-up people made her look the best she possibly could, they didn’t give us even one close-up!  What’s up with that?!

Ryan said, “Tonight is nothing but celebration.” That’s not true at all; it was the end of the competition and a totally stressful several hours for the contestants and their families and friends!

Alex Preston and Jason Mraz were the best of the night.

That was really brave of Ryan to sing.  But then again, what did he really have to lose?

CJ can not sing at all. How did he get on this show to begin with??? And he gets to go on tour. Go figure. I think they chose him because they felt sorry for him, with no regard to this being a singing competition.

Mr. X loved the judges performance of Go Your Own Way, and I pretty much did, too. It was the perfect number to put all their various talents together. Even Jennifer came off well in a group setting, which I wouldn’t have thought possible before, with no dancing involved.

But I think the sound mixing was all off all night, because everyone sounded pretty bad, especially Harry Connick, Jr., who we know can sing.

I think Randy Jackson enjoyed his new non-judgmental role this season a lot more than his last few years on the judging panel. They didn’t need him at all, in any capacity, but they probably still had a deal with him that they couldn’t break.

Caleb was indeed a low-key winner, but I loved it. He’s been the quiet leader, and in charge, all season long. Good kid.

And I love a rocker who actually washes his hair!

And now we move on to America’s Got Talent and So You Think You Can Dance!  Arghhh!  I need a break from caring so much about strangers!!!