Trending
You are at:Home»TELEVISION»TELEVISION: AMERICA'S GOT TALENT—SEASON SEVEN
By Karen Salkin on July 25, 2012 · TELEVISION

I recently realized that I hadn’t yet offered my thoughts on this season of America’s Got Talent! Horrors! But, because of circumstances beyond my control, (everything seems to be out of my control this year,) I finally had to make some time to catch up on the show. And not just this season’s episodes, but many of last summer’s, as well, because I still had it on my DVR! A year later! [In my defense, that was right when my precious mother got sick, so I rushed to New York for two months, and had no time for frivolity, except what I could offer my mother to entertain her.] 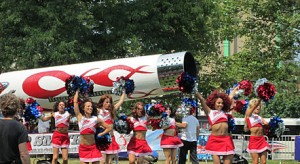 So, now, here are some of my random thoughts on the show, both seasons. Most are general, and about the judges and the stupid way the whole thing is run; I’m pretty sure much of what follows borders on ranting rather than musing. But, most of them are pretty good points, I believe; if only the powers-that-be over there would read this and take heed! Yeah, right.

First and foremost, Nick Cannon is still the best host in television! This show would be torturous without him! He makes everyone feel better, especially the people upon whom the judges just dumped all their venom. It’s shameful that once again he was not nominated for an Emmy!!!

That’s actually the only good comment I have! So, here come the sad realities of this show:

This show should be called America’s Got Contradictions. The idiotic judges tell everyone to “be original,” “do something different,” “surprise” them. Yet, when someone does something other than what they did at the first audition, (trapeze rather than strength, jokes rather than impressions, ballad rather than uptempo song,) they get berated them for it!

There’s no reason for the judges to be so rude to these contestants, especially after they’re the ones who put them through each round! They should give them constructive criticism, so that they can learn and grow, but not scold them like a mean parent or bitter teacher does. Rudeness is just not called for. (Howard Stern’s rudeness to poor, tiny, not great singer, Big Barry, and to a real musician who creates clever musical instruments out of ordinary items, was a lesson in how not to treat people. He’s disgusting. And should be ashamed of himself, but I’m sure isn’t.)

And, since these shows present such rudeness as entertainment, they set a horrible example for the country, in general. Normal people wonder why there’s so much rudeness today. They need to look no further than these competition show judges. There needs to be a new series on television, spotlighting kindness and normalcy. How refreshing would that be???

And encouraging the audience to boo and scream is just nuts. They practically incite riots!

And Howie Mandel should be ashamed of himself. He made a Jewish joke to the kid with the yarmulka!!! And he said it was okay because he‘s Jewish, too. But if there were a black judge, would he be able to talk to a black contestant by calling him the N-word??? I think not.

And the contestants are all made to say that all they what to do is win, when we all know that’s not true. For these acts, especially the specialty ones, which is the majority (over singers,) the exposure is what it’s all about. For example, the magicians and acrobats are mainly already working, but in obscurity. (Like in Cirque shows, or trailing circuses, or Europe.) But this modicum of fame they’re getting from AGT will help them get more jobs, perhaps even as headliners. The people with the real talent, like those acts, have obviously been at it forever, so they have something going on. This show just makes it better.

It’s nice to have confidence, but some of these contestants are just deluded. Do they really think that dressing in drag and standing there singing just okay is worthy of a million dollars??? As Johnny Carson once said to me on his show, (over something I said that was funny, not pathetic like these people,) give me a break!

The judges say that the winner has to be a “forty-five minute act that headlines in Las Vegas.” Yet, last year, they chose to put through a man who does a giant high-dive, which takes about forty-five seconds, and this year, they’re high on a guy who gets shot out of a cannon in about that same time. How do these men fit the criteria?

And since when did they make the show about looking for an act to be in Vegas anyway? That wasn’t the original intention of the show! No one said they have to make it a forty-five minute act when AGT started.

The producers are turning this show into Queen For A Day. (It’s an old show where the biggest sob story won. Seriously!) No one has ever come on AGT and said, “My life is good,” “I was doing it anyway,” “I just wanted to do it on TV for fun,” “I make enough of a living doing it already.” Everyone has to be poverty-stricken, lost their job, have a sick relative, etc. It’s just creepy.

They’re all made to say things like, “I want to show America what I can do.” Gag me with a spoon.

And speaking of America, the judges need to top invoking it! Last year, there was not one American on the judging panel! It was two Brits and a Canadian. This year, they swapped out one Brit for an American, but it’s one of the creepiest, rudest people in the whole country! Certainly not representative of the U.S. And even though I’m Jewish myself, it’s not exactly a cross-section of the country to have two Jewish guys on the panel, who bring all their own ethnic schtickla.

And “America” does not care about this show! At all! We care about our families, the war, the economy, health care, national safety, etc. Not who’s on a supposed talent show! We watch this kind-of drivel to get away from what we do care about!

It’s obnoxious that all the contestants are made to say that they’re “taking a risk.” There’s a big difference in choosing a song you don’t know as opposed to juggling with chainsaws!

And why in the world would the dumb directors do “creative” camera work during the acts that are action spectacles??? We, the viewing audience, are the ones who are voting, so why would they deprive us of the effects that were intended for best audience advantage!?

The judges say “you’re what this show is all about” to amateurs and pros both! So, which is it? At least one current season act has been on versions of the show in three countries!

The only successful winner of this show from all the past seasons, or even loser, is Terry Fator, the ventriloquist! (Whom I love and voted for, btw.) That awful chicken plucker who won singing terribly about two seasons ago sometimes appears in Laughlin, but even that’s funny. The PR person for that casino sends me the lists of upcoming performers, and it all “tribute” bands…and Kevin Skinner! Kind-of sad. And amusing.

The powers-that-be over there make the live show performers do really stupid numbers, not of their choosing. And with awful, corny productions that I’m sure make most of them cringe. Not exactly showing them off to their best advantage now, is it?

In previous years, the judges weren’t allowed to say who they thought would be voted through to the next round, which can really influence the voters. Perhaps that’s part of Stern’s deal this year because he just doesn’t stop doing it!

And they, (the judges, not the contestants,) beg for votes like it’s a telethon! Shameful.

Here are my thoughts on last night’s show:

They told the guy who got shot out of a cannon that he’s “original!” Original??? And Sharon Osbourne declared that she’s “never seen anything like it!” Are they insane? Have none of them ever been to a circus??? I’ve been seeing this act since I was four years old!!! And why didn’t they tell him that it’s not a “Vegas act,” especially since it takes only a few seconds and needs to be done outside?!

It seems that every single act gets ended with sparklers going off!!! How banal, especially from a show that values originality.

Speaking of that, the judges never have anything original to say! They tell everyone, “You’re amazing,” “spectacular,” “I love you,” “it’s a tough night,” “people have to vote,” etc.

It’s so rude to buzz acts that they put through to the live shows!!!

The judges always say that just don’t know who is going through. Guess what? None of us do! That’s why they have voting and a results show! We don’t need them to pontificate on what may or may not happen! Just let the show unfold and critique the acts on what you just saw, not on what the result may be!

All three of those fools abused theme song singer Ulysses, after they chose to put him through! But Howie Mandel chastised him for “Vegas-ing it up!” I guess he forgot that they keep telling everyone they’re looking for an “act to headline in Las Vegas!” And it’s the producers who made Ulysses do that inanity; he‘s not the one who made it into that cheesy act they showed last night.

And why in the world did the producers put all the bests acts in the entire competition on the same night, including their top three picks, to go against each other before even the semi-finals??? What a supremely dumb move!

That’s it for now. I have to go put some cold water on my head that feels it’s going to explode from being so upset about all this unfairness. And hope that the acts that deserve it get to move on. Oh, and peace on earth.