Happy St. Patrick’s Day right off the bat. Remember to wear green or you are fair game to get pinched today! You better hope you don’t run into me without that color on. I already did my nails in OPI’s hard-to-find Keep Off The Grass, so I’m all set. 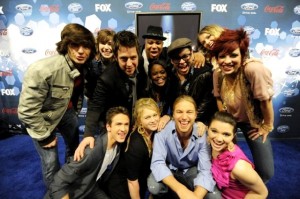 As unnecessary as that previous information is, it’s still more interesting than the American Idol performances last night, the first of the “real” show. I know this is strange, but I usually save all the shows. I don’t know why, but maybe just in case any of these people become famous down the road. And last night, I couldn’t wait to press “delete.” (Except for Crystal, of course.)

Mr. X and I think the judges have lost their minds this season. They appear to still be in the Bizarro universe with most of their comments.

Who picked Rolling Stones’ songs as the theme? No one but Mick Jaggar can do justice to them, except, I’m sure that Adam Lambert could have. And Todrick Hall would have killed on his planned Satisfaction, but don’t get me started on his erroneous elimination again. So, they all needed to change the songs up to fit them, and then they usually get punished for that. Except for the creepy, nerdy, perfect-for-teen-horror-movies Siobhan whatever her name is.

What do they see in that girl? Her father said something so nice last night, to the effect of their family being rich with music or happiness or something (I’m being serious here–it was a really lovely, heartfelt statement,) but she’s just weird. And my ears bleed when she hits that high note, that the judges praise. Are they nuts? I told Mr. X that she’s trying to be Adam, and can’t come close, even if she dyes her hair black and wears leather (which is probably coming next, judging by her boots last night,) and then Simon actually compared her to him! That’s the first time I actually detested Simon, ever.

BTW–I did like her outfit…until she stood up. I love dresses like that with big, flat, lace-up boots, but those were the wrong boots, and the whole thing just looked bad on her strange body with those toothpick legs. This whole group needs a stylist, except for having a good make-up person already (for most of them.)

The whole show was a big yawn, even for the ones I semi-like, except for the fabulous Crystal Bowersox. It was unfair of Simon to intimate that she already thinks she won, which is so far from her demeanor. When she told him just how untrue that statement was, he said that “others” think so. Does he mean half of the cast of Lost has weighed in on the competition? Speaking of Lost, I hope that’s not what her comments got when she pointed out that she never thought she has it sewed up, but thanked Simon for thinking so. (Or something to that effect–no way will I watch that horrible show again to get the exact exchange.)

Most of the other contestants aren’t worth commenting on, yay or nay, so that’s pretty much it. Except to say that I’m glad Paige sang well again, after the disastrous trying-to-be-Michael-Jackson last week, but her horrible outfit, that made her butt even huger than it is, has got to go. And why did they leave us hanging with Casey’s back story? Is he indeed brain damaged? No joking here. I want to know. Maybe that’s why he’s able to smile through Kara’s creepy fawning over him.

Oh, I almost forgot–why was Ryan acting even weirder than usual? From the very beginning, even before I noticed his glistening eyes, I thought he was drunk. There’s no other explanation for his behavior. He’s also so full of himself now that he feels that the show is about him. It’s like Alex Trebeck, who acts like he’s the one who wrote all the Jeopardy questions because he’s smarter than everyone. I’m so sick of these ego-maniacs. Are there no nice hosts left on TV??? (Actually, I can think of only Craig Ferguson, Jimmy Fallon, and Jimmy Kimmel. Sad.)

Last thing about Ryan–what kind-of idiot asks singers (and I use the term very loosely in this case) if they know of the Rolling Stones, like they died or left the business or something. News flash for him: EVERYONE in the world is familiar with the still-in-the-business Stones!!! Is he crazy?! They were even half-time entertainment at last year’s Superbowl.* Their recent tour was sold out. THEY’RE THE STONES, FOR PETE’S SAKE. Yeesh.  *[Note: an astute reader pointed out that the Stones played at the 2006 Superbowl, not last year, 2009.  I’m so sorry for the error.  But after seeing Janet Jackson’s naked breast in 2004, all the half-times became a blur!]

Okay, I have to go play an Adam Lambert tune, to erase last night’s show from my memory. They can’t invent that memory-erase pill fast enough for Tuesday nights! (Somehow, I hear a lot of “amen”s to that sentiment.)