Trending
You are at:Home»MISCELLANEOUS»SPORTS/MISCELLANEOUS: DEREK JETER’S LAST SEASON IN NY (AND MINE, TOO!)
By Karen Salkin on April 11, 2014 · MISCELLANEOUS, SPORTS THOUGHTS

DEREK JETER’S LAST SEASON IN NY (AND MINE, TOO!)

I’ve been really upset about two important New York events that are coming up in the next few months: I’m doing my last ever trip to my cherished Brooklyn home, and Derek Jeter is playing his final season with my beloved Yankees.  They’re almost equally sad to me. 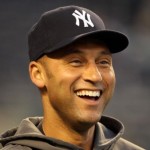 I’m so wrapped-up in my own New York problems these days that when I read that Derek was retiring after this season, it felt like yet another gut punch. I wanted just one more season to enjoy watching him play every day, (on TV, of course,) with my own stressful situation behind me.

So now the pain of us both leaving New York at the same time is almost too much for me to bear.

I’m sure I’ll write much more about him as the season comes to an end, (as I did with Mariano Rivera last year, which you can read here, if you like: itsnotaboutme.tv/news/sportskarens-musings-end-of-a-yankees-era,) so all I’ll say for now is that I wish us both the best of luck with our New York exits. I’ll be relieved when mine comes to an end, and in hysterics when Derek’s does.