Just my luck, I got bronchitis right smack dab in the middle of the Olympics! It’s not as dramatic as a competing athlete getting sick, but it’s cramping my champion watching style. And it means I haven’t taken as many notes as I would have in normal conditions.

I had also vowed to tweet my moment-to-moment thoughts on the Games, but that had to be put aside for the time being, as well.

But, I did get to jot down a few thoughts along the way, (just not for the past several days,) so here they are, for what they’re worth: 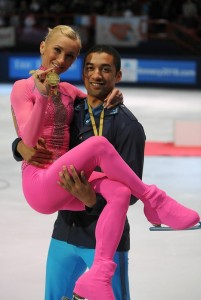 All I can say is, thank goodness for hockey and curling, so that I can get some much-needed rest in-between my almost twenty-four hours a day of Olympics watching! I don’t care about those two sports, (especially women’s hockey!,) so I just fast-forward through them.

I’m having a horrible Olympics because I’m such an Empath! I’m sick for: Shaun White, (who was so gracious in defeat,) the German figure skating pair team of Aliona Savchenko and Robin Szolkowy (who were due to win for the past four years, only to be undone by the Russian machine,) John Daly and Katie Uhlaender, (the American skeleton guy and girl who both lost the bronze in their last of four runs,) and French skater Brian Joubert, who hung around for four more years only to get way under-marked in his short program. (I’m not the only one who said that; the commentators did, too. They’re the ones who egged me on in the first place.) I feel a little bad for Hannah Kearney, Ted Ligety, and Bode Miller, but they’ve all won enough medals in the past that they should be fine. [Note: My thoughts on Bode’s interview yesterday in about six more paragraphs.] 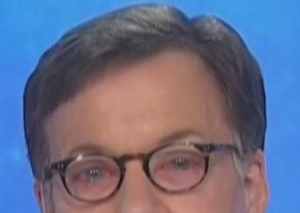 But heck, I’m even upset over Bob Costa’s eye infection!!!

On the positive side though, I’m thrilled for Canadian ski mogul champion Alex Bilodeau, gold medal ski slope style girl and guy Jamie Anderson and Sage Kostenburg, bronze medalist in the same discipline Jenny Jones from Great Britain, all three female alpine combined medalists, and the happiest silver medal winner ever, Nicole Pikus-Pace, who got it for skeleton, (which is perhaps the dumbest sport ever!!! It seems like something L. Ron Hubbard invented!)

There have been many interesting notes that have caught my eye along the way, as cough syrup-addled as it is. For instance, as sick as I am for Shaun White to not medal, I am really happy for the gold medal winner, IPod. (His real name is Iouri Podladtchikov.) His parents are brilliant mathematicians, and he was a very gracious winner. And, of course, he’s cute, too! 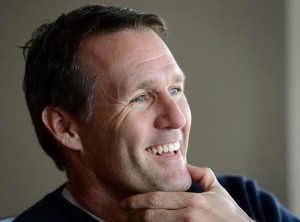 Older guy commentators and former athletes, Dan Jansen and Cris Collinsworth, are both still attractive with age, especially Dan, who’s always looked like my high school back-up boyfriend. (A story for another time.) And how gorgeous is American freeskier Bobby Brown? (Look him up.) Not to mention hockey hero T.J. Oshie, who’s also well-spoken and a bit charming, to boot. 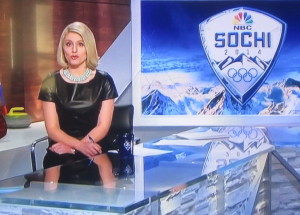 Rebecca Lowe. Can you guess why I took this picture? Photo by Karen Salkin.

Speaking of well-spoken, I must say that many of the participants, on all levels over there, are lucky I’m too weak to take lots of notes because half of them are morons!!! The daytime host on NBCSN, Rebecca Lowe, keeps using a team as plural, even though it’s singular! Example: “Finland lead Austria.” She does it multiple times a day! Why doesn’t someone on the staff correct her already??? (If I felt better, I would just tweet it at her, but she probably wouldn’t even understand.) She also wanted to know if a certain race was between two countries, so she asked the caller of the race, “Is it between Norway and between Poland?” She’s an idiot!!!

There are so many expressions mis-used by so many on-air people that I just can’t get upset over them all. (Even though I do.) But I really couldn’t believe it when ski commentator Christin Cooper said that someone who flew off the course “threw down the gauntlet,” which means “to challenge someone, “or “invite them to argue,” clearly not what was even close to being done. [Note: She’s the a-hole who did that offensive post-race interview with Bode Miller yesterday, where she desperately tried to make him cry by badgering him about his recently deceased beloved younger brother. It was one of the most offensive interviews I’ve ever seen in sports. If NBC keeps her on staff, something’s wrong with them, too.]

And if one more person begins an answer with “I mean,” I’m afraid I’ll have to start giving out demerits! (Or at least dictionaries, thesauruses, and encyclopedias.) “I mean” means a definition is coming, which is absolutely not what they mean! 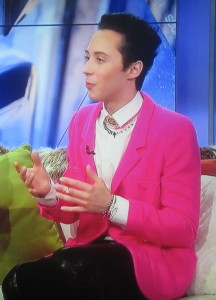 So, let me get back to a few more positives, all from the skating arena. I am so enjoying the commentary of Johnny Weir! And I’m not just saying that because I’ve met him several times, and he’s one of the few guys who called me when he said he would! He’s been charming, fun, witty, and most of all, insightful! And his speech and language are a joy, (unlike a lot of his over-the-top attire.)

And, shockingly, he’s brought buddy Tara Lipinski along for the ride. I’ve never been a fan of hers, neither for her skating nor her talking, but partnering on-air with Johnny has really brought out something good in her. So, many props to that commentating team! (Although I don’t know why NBC needed two different skating booth teams; it’s just a waste of money.) 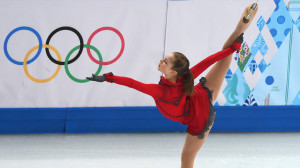 And, as much as I’m rooting for Japan’s Mao Asada to finally beat Korea’s Yuna Kim in the ladies figure skating competition, that little fifteen-year-old Russian girl, Yulia Lipnitskaya, has been my favorite all season long. Her long program, to the famous music from Schindler’s List, is something to behold. So, be sure not to miss it later on this week.

Lastly, (for now) as all good competitors should, (even if their category is just Olympics Viewing,) I must thank my coach/trainer/physical therapist for getting me through it up to this point. Mr. X has kept me supplied with chicken soup, Zicam, cough medicine, and has been the Vicks applier, (which I think is akin to ski wax technician.) I hope he can help me go the distance, so that I can do an Olympics Wrap-up for you at the end, if not win the Viewer Gold Medal!