Trending
You are at:Home»GOSSIP»SPORTS: US OPEN 2010 WRAP-UP
By Karen Salkin on September 13, 2010 · GOSSIP, SPORTS THOUGHTS

This column would have been a lot longer, and more fun, if Roger Federer had won his semi-final. But, now, I’m way too crushed to talk about it. I just want to put the whole thing behind me, and hope that I can stop myself from watching so much tennis in the future. (I have a feeling that having one-year-old twin daughters may have something to do with his game slipping a bit, although he was fabulous in his five matches preceding the semi-final.) I just get so depressed when Roger doesn’t win. I have a feeling he gets over it quicker than I do. I’ve been told before that I’m an Empath, and I have to agree. 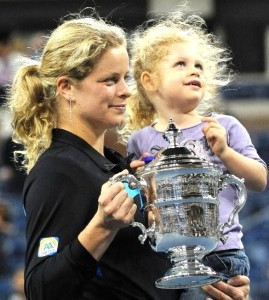 Anyway, I’m thrilled with Kim Clijsters winning the Championship for the third time! Everyone who knows her says that she’s the nicest girl on the tour and you can always tell that from her. She deserves it, truly.

But a weird thing is that with the way the points are figured out each week, Kim winds-up moving back two spots to #5, and the runner-up, Vera Zvonerava, moves up from #8 to #4! Go figure. (I like Vera, too, by the way.)

The best part of the whole tournament is that Venus Williams didn’t make it to the Finals. I always try to like at least one Williams sister, but they just make that impossible. Honestly, the whole tournament was so much easier to watch with Serena not in it. And Venus was just way too full of herself and rude to the interviewers and her opponents. (She always seems so insecure, though, while acting so superior.)

She made each opponent wait to come out onto the court by taking up to two minutes extra to get to the door. Then, after they had warned-up and were all set to go, every single time, Venus left the court to go to the bathroom. Trust me when I tell you that nobody else does that!!! It’s just rude and disrespectful to the other players.

And her pre-match interviews, which are mandatory before they walk out, are so curt and off the point. She, and her sister, too, just repeat the same sentences over and over, each and every time, with no regard to the questions asked. Nasty. 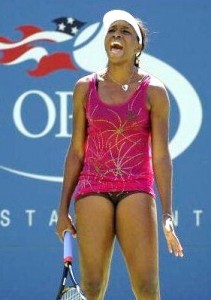 Speaking of nasty, did you see her attire? Most players wear one outfit the entire tournament, with some of the top contenders having a different one for night matches. (I don’t know if it’s superstition, or so viewers can identify them, or because their sponsors don’t want to cough-up another outfit, or what, but they all do it.) But, in the six matches Venus played at the US Open, she wore five different ones, with three of them being dresses of the same design, just different colors. What they were were skintight, stretchy, what I call “tramp dresses,” just like ones I wore all the time just a few years ago. To clubs!!! Not to compete in athletics!

She looked like an idiot, having to pull the dress down after each and every point, with it sometimes riding-up past her humongous rear-end. And even worse was that she had bike shorts on underneath that looked like the dark top of pantyhose or old fashioned stockings. She looked like a hooker on the court. I’d like to see her just try that at Wimbledon. In true Queen of Hearts fashion, I fear they’d say, “Off with her head!” The only good part of watching her compete was that the crowd usually cheered for her opponent, a turn-of-events that the commentators chose to ignore.

Speaking of Ugly Americans, the fuss that Andy Roddick made when called for a foot fault was so un-called for. He did indeed foot fault, which seemed of no concern to him when he verbally went after the poor lineswoman who called it, demanding to know, “Which foot?!” She erroneously answered, “The right,” which set him off. He knew it couldn’t be that one because he leads with the left, so his only purpose in asking was to try to confuse her. She called the fault correctly, which was proven on the video replay, but just answered the wrong foot when he yelled at her about it. Even in the press conference after, he said her not knowing right from left is what made him crazy. Yeah, that’s what did it and not getting called for a foot fault.

There were lots of other juicy stories, some heart-warming, (like the one of the doubles team from Pakistan and India, two countries who’ve been involved in acrimony since about 1943, who made it into the Men’s Doubles Final,) and some hopeful, like the up-and-coming young Americans. They make me glad that I watch every second of the tournament.

But my last topic on the US Open is the grammar and pronunciation of all involved. (It’s not just those people; it’s everyone on TV nowadays! And in real life, unfortunately. I always mean to start a Grammar section on this site, but there just hasn’t been any time.) I got tired of noting the oh-so-many mistakes the commentators made, from grammar to pronunciation, so here are just a smidgeon of the ones that offended my ears the most.

First of all, I really like Dick Enberg, but he insists on mispronouncing “Nadal.” It’s so annoying. Why can’t these broadcasters have each player pronounce his or her name on tape before the tourney begins??? That way, they can all be respectful of others’ names and get them correct.

Brad Gilbert is just annoying with his own language for pronouncing everything. It wasn’t till about Day 10 (of now 15!,) that I found-out that by “fearhand” he means “forehand!” He’s like some of the not-my-taste guys I went to high school with in that regard. Not great when you’re a guide on national television.

I actually always like to listen to John McEnroe commentate because he’s knowledgeable and amusing, but his Queens-speech can get a tad grating at times, the worst of which is that he says “menally” rather than “menTally.” For a short while, I actually thought that he was talking about something other than the players’ mental states!

Pam Shriver just gets way too many words wrong to report here. I constantly go back to make sure that I heard her correctly. The one that really stands-out to me is when she announced that a player had “clenched” a title. And she even punched-up the word and lingered on it! (She meant “clinched” of course.) I’m always amazed by just how many people mis-speak all the time, but it comes down from having erroneous parents, teachers, and mis-speakers in the media. All Americans should all be forced to take classes taught by someone who knows our language.

But the absolute worst one was by someone on the somewhat obscure Tennis Channel, whom I had never before seen, named Katrina Adams. How this woman has a job that involves speaking is a mystery to me, truly. When I heard her say this one word, I could not believe my ears. I went back to listen about ten times, and then had to confirm it with Mr. X. And then I heard her use the same word on subsequent broadcasts. Here it is–she told winners, “ConDratulations!” I’m not kidding! With a “D,” not a “G!!!” You would think that after the first time she said it someone would explain her mistake, but no. She actually thinks that that’s what the word is! How did she get a job on TV??? It’s just mind-boggling. Or, as she would probably say, “Mind-bottling.”

I’m skipping the Australian and French Opens, but, if somehow I have some thoughts on them, you know I’ll weigh in.