One of my two favorite tennis tournaments, the US Open, is starting on Monday. (The other is, of course, Wimbledon, by the way.) 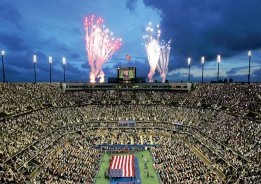 Usually I begin my write-up of it that morning, to let everyone know that I’m going to be out of commission for the next two weeks. (Unfortunately, I have too much on my plate at this time to be able to do that this go-round.)

But this year, the Emmys came really early, disrupting my sports watching. So I’m giving you early notice about the tennis next week, in case you’re a fan, as well, and wanted the reminder that it’s on. Tomorrow will begin my Emmys coverage, including news of the attendant gifting suites.

But never fear, tennis fans–now that I’m finally getting into the swing of using Twitter, (@MajorCelebrity,) I have a feeling I’ll be tweeting about some of the players’ (and announcers’–remember, nobody’s safe with me!,) looks, outfits, and behavior. And of course, my daily love and admiration of Roger Federer. (Not to mention my relief that defending champ Rafael Nadal will be sitting this one out!)