Last week was a juicy sports week, not because of any real competition, but because of a couple of star-studded events, namely Major League Baseball’s Home Run Derby and All-Star game, and ESPN’s ESPY awards.

I did put my life on hold to watch Derek Jeter’s last All-Star Game live, but the other two events I recorded and watched later. The Home Run Derby was rained-out for the first hour, which meant my DVR didn’t get the last few rounds of it, so I had to re-record it the next day and watch the action than, thus making the end not as dramatic as it would’ve been if I had watched it without knowing the results.

But all three events were entertaining enough, no matter when I watched them. I was too emotional during the Derek Jeter stuff to be able to jot down many musings, so this is a shortened version of my Sports Thoughts. For what they’re worth, I’m sharing them with you. Here we go: 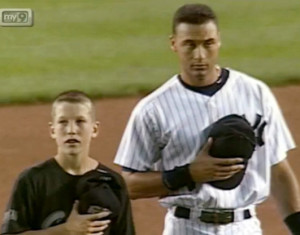 Todd Frazier when he was a World Series-winning Little Leaguer, with Derek Jeter, who looks somewhat like Laurence Olivier in Othello, don’t you think?

I love that eventual runner-up (which was shocking, by the way, after his poor start,) Todd Frazier chose his bro to pitch to him!  And he had a smile on his face during every interview, through the long rain delay, even though he had to go first, which he was actually happy about!

Talk about having to stretch!  (Because of the rain delay.) Oy.  Those broadcasters needed me!

I’m so upset Todd Frazier missed the team picture!  It’s because he was first up, but still…

Frazier is a great case of slow and steady.  Love it.

I was grateful to the rain delay that I got to watch lengthy interviews with Derek.  I never realized that what makes his face so gorgeous is his smile.  His face is nice at rest, but when he begins that smile, the room lights up!

Do any of you know what that necklace that Derek wears is? I’m dying to know, and can’t find that info anywhere. 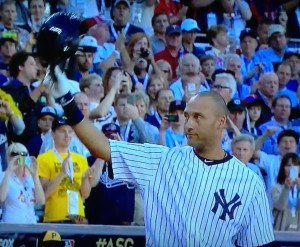 I was feeling a bit bad for Derek to not have a wife and kids there, like most of the guys do.  But he’s the star of all stars, so who can reign him in? (But then I noticed his model girlfriend in the stands, sitting with his fam, and the pity party abruptly ended.)

The press respects Derek so much that they don’t even mention, or ask about, his girlfriend! 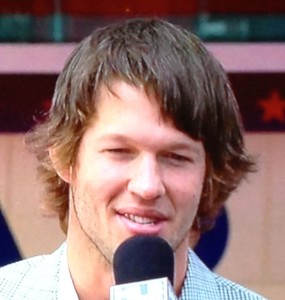 See what I mean about Kershaw’s hair? Photo by Karen Salkin.

Although I’m happy for Mike Trout, I woke up the next morning really depressed that Derek Jeter had not won the MVP award. Mike deserved it, but you could make a great case for Derek to receive it, as well. He started off the game with a double, scored the first run of the game, got a second hit in his only other at bat, and made a great diving catch to prevent his opponents from scoring in the first inning. Yes, if he had won it, it would’ve been mainly because it was the last All-Star game of one of the all-time greats, but he also would have deserved it. I’m sure I am more concerned about that situation then Derek is, though!

Since this game was mainly all about Derek Jeter, for all concerned, not just me, I didn’t write down many more notes. But I do have one big question that needs to be answered: What is Clayton’s Kershaw’s hair-do?  How is that a style??? It looks like his great-grandma cut it, down in the swamp! 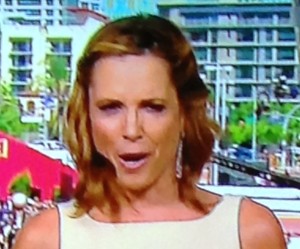 Speaking of hair, look at Hannah Storm’s sad ‘do! Photo by Karen Salkin.

I could do a whole column on how creepy Deanna Kay, their social media woman is. (We never saw her again, after her opening debacle, so perhaps she got fired right there and then. At least, we can hope so! How did that woman ever get a job to begin with?!) Or why the heck Hannah Storm wore her hair like, (as Mr. X so accurately observed, it looked like she was in rehearsal,) but I’ll try to restrain myself, and stick to the more pertinent moments.

Why are they giving out some awards on the red carpet? That deprives the winners of going up on stage to accept, in front of their peers, and the non-winners of even hearing their names read on national television! Very rude of the producers. 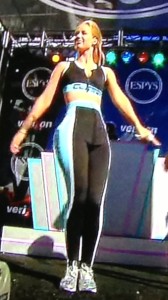 Why would Iggy Azalea be seen in those pants??? Photo by Karen Salkin.

What is Iggy Azalea’s body doing???

Nick Young actually did okay as a co-host. But it was a bit weird that he observed of Maria Sharapova: “She didn’t have to show off no accessories tonight, cause the hair and the skin show for itself.”

But she was wearing big earrings and three rings, so he missed that.

Maybe they should have had Michael Sam do the fashion reports! People are upset because he’s gay, but so many of these supposedly manly men athletes are a little too into their fashions, and describing them. You would never have seen Mickey Mantle or Bill Russell doing that, nor Larry Bird!

I was impressed with what The Rock had to say; he said that every job he’s had has been his dream job because years before he had been cut from a lesser football league with seven dollars in his pocket! I love a person who knows to always be grateful!

Hannah said the red carpet is “officially closed and winding down.” Well, which is it?! Closed or winding down?!

Shockingly, I did not hate those kid hosts from New York. I actually even kind-of liked them, surprising even myself. 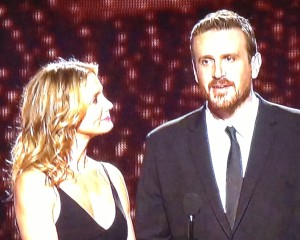 Cameron Diaz and Jason Segal, looking as bad as they were unfunny. Did he have his eyes done? Photo by Karen Salkin.

That was an ill-fitting opening suit on Drake.

He needed to stop constantly telling the audience to clap! And stop with the loud clapping himself! So annoying.

Could presenters Cameron Diaz and Jason Segal be any more unfunny?

(Mr. X just told me that watching with me is like watching TV with a sniper. Yay!)

Maria Sharapova looked gorgeous! Now I finally see what all the fuss is about. 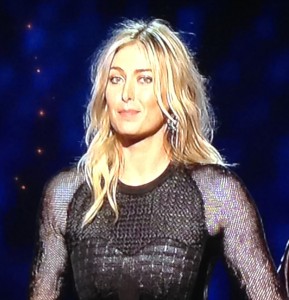 I love Kevin Durant, and he seems like the nicest guy ever, but he always seems so uncomfortable in clothing, doesn’t he?

Michael Sam was very well-spoken and likable. And nice-looking, too. So, good for him, about everything, not just coming-out as gay before the NFL Draft a few months ago.

The stupid Drake-as-Manny-Pacquiao-singing bit was cruel, and way too long. 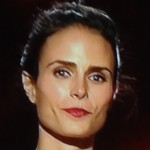 Was Jordana Brewster’s hair telling us she was presenting an award, or getting ready to wash her face? Photo by Karen Salkin.

I don’t know who Jordan Brewster is, but she looked like she was about to wash her face, rather than hand-out an award.

Kiefer Sutherland did really well, giving the Jimmy V award to Stuart Scott. That was a hard one.

Danica Patrick looked unbelievably great!!! The best of the night. And, to top it all off, her hair was rocking a perfect part!!!

Drake was a somewhat entertaining host, (especially in his one satirical singing bit,) but there were just not enough laughs in this show.

I think that Drake got carried away with the fact that he had hosted an SNL earlier this season. Maybe next year they should go back to having a real comedian host the show. Or Justin Timberlake!

Danica Patrick, looking the best of the night! Photo by Karen Salkin.

I’m so sick of award shows going over their allotted time, so I have to remember to record at least one show after it to get it all.

I’m so sick of award shows going over their allotted time, so I have to remember to record at least one show after it to get it all.

They chose four great candidates for Male Athlete of the Year. But baseball’s Triple Crown winner, Miguel Cabrera, really should have won, (over Kevin Durant.)

Speaking of Kevin Durant, he seems like just a sweet basic guy, not at all like an NBA player! Loving him.

Robin Roberts looked great. Her outfit would be a perfect one for a fat girl because it was so slimming.

And, on that shallow note, let me end. I think that Derek Jeter made me be more mellow in my snarkiness last week! I don’t know if that’s really a positive or not, though!