THE US OPEN BEGINS TODAY

And in the nick of time, too! At least for me, while I’m convalescing from my hand surgery. Let’s face it–I was planning to stay in and watch the entire tournament anyway, as I try to do every year, but I’m just glad that since I have to rest my hands right now, that whole debacle as concomitant with the tennis. And, as if I haven’t been incommunicado enough recently because of said hand issues, don’t expect to hear much from me by phone or email this next fortnight. (I am back to writing daily columns though, so be sure to always check back for those.) I usually spend this time concentrating on the lives of the athletes rather than on my own. As tense as I am for many of them, it does beat stressing out over my own problems. 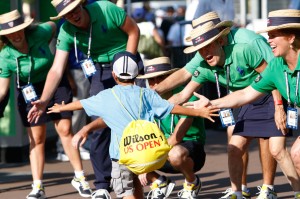 This is the first year I don’t have many pre-conceived notions about what will happen at this year’s US Open, on either side. Because of my medical situation, I missed ninety-nine percent of what happened with this summer’s US Open Series, so I don’t have a clear picture of the current hardcourt tennis scene.

What I do know is that the number three seed on the women’s side, Maria Sharapova, is out (with a shoulder injury,) as is American man, Mardy Fish. (But he cited “personal issues,” rather than an injury. He did have a heart scare last year, so perhaps that’s still dogging him.) And Wimbledon ladies champion, Marion Bartoli from France, just retired due to her way-too-many painful body parts. That one’s really too bad because I think many of us were looking forward to seeing how she did in the afterglow of her first Major championship. She was definitely fun to watch, and I wish her all the best.

I’m actually a tad depressed before the US Open even begins because my beloved Roger Federer has dropped to being the number seven seed. Vomit. He’s probably handling his decline in ranking better than I am because he so classy. I’m sure he doesn’t want his fans worrying about him.

It actually may turn out to be a good thing, though, because the pressure appears to be off him. I’m sure that everyone’s expecting the winner to come out of the top three seeds, who are Novak Djokovic, Rafael Nadal, and Andy Murray, or even number six Juan Martín Del Potro. I semi-like them all, but I am rooting against Rafa because I don’t want him getting closer than he already is to Roger’s astounding record of winning seventeen majors. Seventeen!!! Can you imagine winning even one?!

Because he’s already considered the greatest tennis player of all time by most people, Roger possibly should’ve already retired. But he still loves the game, and we fans love watching him, so what the heck.

Of course, as always on the ladies’ side, I’m not rooting for anyone in particular, just against Serena Williams.

So, we’ll see how it all plays out over the next two weeks. And if, bite my tongue, anyone gets a major hand, wrist, arm, or shoulder injury, I’ll truly be feeling their pain. As much as I hate what my hands are going through, in this case I must say better me than any of them.