Trending
You are at:Home»SPORTS THOUGHTS»SPORTS: STEVE NASH AND THE PHOENIX SUNS
By Karen Salkin on May 10, 2010 · SPORTS THOUGHTS

STEVE NASH AND THE PHOENIX SUNS

Okay, I’m just getting carried away, but I’m a little punchy from all my sports watching, especially this past week-end.

I just want to say that I couldn’t be happier for The Phoenix Suns to be moving on in the play-offs. Especially Steve Nash and Grant Hill, two of the classiest people in the history of basketball and possibly even all sports. I love those guys!

The weird thing is that I always have to force myself to sit down and write. But right now my fingers are flying off the keyboard, that’s how anxious I am to share my admiration and respect for those guys. The whole team. And Alvin Gentry, their coach, who’s done a wonderful job with them.

While I’ve had the same baseball and football teams most of my life, and have never wavered from them,–not ever!–I change basketball teams based on the personnel. For a few years back in the day, (from before they started winning, so please don’t scoff,) the San Antonio Spurs were actually my team. So, I was thrilled for most of their wins. The only time in my life that I ever rooted for the Boston Celtics turned-put to be the year they won two years ago. I had really wanted Kevin Garnett and Ray Allen to get their championship, and the team had the best record that year, so it was only fair. 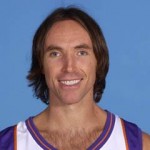 But, outside of the 2008 Championship, I’ve been rooting for the Cleveland Cavaliers for a few years now, mainly because of the amazing LeBron James, of course. As I watch the West, though, I have never rooted against Steve Nash. It was hard for me when, in 2007, he went against the Spurs, for whom I had previously rooted. And then they mis-treated Steve, (Robert Horry did something dirty,) so I turned against them.

This year, the Suns played the Portland TrailBlazers in the first round, and I like them both, so I just watched and tried not to root. But I was so thrilled for Nash and Hill to move on, something that’s never happened in Grant Hill’s long career.

Next, they went up against the Spurs and no one, including me, thought the Suns had a chance. Charles Barkley called it, but, with him being a former Sun, you can tell he was saying it with his heart, not his head. So, tonight, when the Suns swept the Spurs, I was also thrilled for Charles to be able to stick out his big chest and be proud of his guys, and for sticking with them. 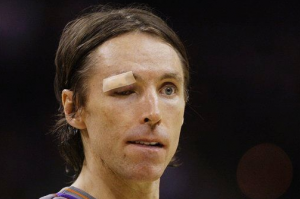 But I really just started writing this to congratulate the Suns and say that, in all of sports, I have never seen a performance by an athlete with one eye completely closed like we saw tonight! Not even in boxing! Steve Nash played the entire fourth quarter with his right eye fully closed from a cut he had sustained in the third. Absolutely amazing! If they had put this in a fictional movie, people would have said, “Yeah, right! Like that could ever happen in real-life!”

The best part of the whole series-clinching Game 4 was how the San Antonio Spurs acted; they were so happy for the Suns! It was like a love-fest out there. You could tell that the Spurs organization meant their hearty congratulations and post-game praise the Suns.

For some of my friends who just can’t understand the powerful attraction that watching sports hold for me, just watch the fourth quarter and victory aftermath of this game, and it should become apparent. I’m verklempt!