I had originally mixed-in some musings on sports with other topics, but the sports section was getting so big, especially with all the baseball happenings, that I decided to split it in two. So, here are the sports thoughts, with the miscellaneous subjects appearing in tomorrow’s column.

Unfortunately, I do have to begin with the horrible news from last week because just trying to ignore it in print is making me feel rude, but the musings get better after that.

–First of all, no matter how much this will bring the room down, I do have to acknowledge the tragic, tragic death of Shannon Stone, the fan in the stands of the Texas Rangers game last week. Believe me, the accident has barely left my mind, but I don’t want to depress readers, so I continue with my frivolity. But every day, my heart goes out to his wife and young son. And Josh Hamilton, too. (I can’t write about it now, so if you don’t know what I’m talking about, and want to, please research it.)

Now, back to more frivolous, happy, and hopefully sometimes amusing or educational thoughts:

–I was saving this column for after the All-Star Game, but I needn’t have because it was pretty uneventful, unlike the one in Yankee Stadium three years ago that went fifteen innings and almost five hours! That was into beyond the wee hours. And I was in New York, at first grumbling that I was in town and didn’t get to attend the game, and then being relieved that I was at my home there, cozy in my bed, though forcing myself to stay awake for the whole shebang! 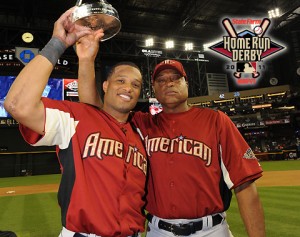 –After Derek Jeter’s storybook week-end, the Yankees streak continued in that vein with second baseman Robinson Cano’s record-breaking win in the Home Run Derby last night. A first time participant, he beat the winners of the previous two competitions, and the baseball batting leader so far this season, to take the title.

The entire event was the most exciting it had ever been, at least in the many years that I’ve been watching it. The best part was seeing just how much the whole All-Star experience meant to Robinson. For someone who really seems to struggle with the English language, he expresses himself perfectly. Everything he had to say after his win was just beautiful, especially about how thrilled and honored he was to be in the All-Star Game. That’s the ‘tude all the players should bring to it.  (And, thankfully,  most do.)

–Which means, of course, that I’m a tad disappointed in Derek Jeter that he didn’t show-up, though voted in as a starter by the fans across the country. And that was before his historic Saturday! (You can read all my thoughts on this particular topic in my column from two days ago, that was all about Derek.)

–While we’re on the topic of the All-Star Game I must say that I’m a tad disappointed in the sitch. Some of the biggest names, like three of my faves, Derek Jeter, Mariano Rivera, and CC Sabathia, have chosen to sit it out this year. (In all fairness to CC, I don’t think he was chosen until after he had pitched on Sunday, which would preclude him from pitching again two days later.) I know that some guys want the days of rest instead, and some are just jaded.

But it puts a bit of a damper on the proceedings for everyone. There are baseball players whose greatest joy in life would be to make just one All-Star team, and when more famous, or better, players shun it, it lessens the fun a taste for the guys who are happy to be there.

It’s kind-of like a high school situation. In my school, since their were just a few cheerleaders, but over four thousand students (!), we had to have a bigger team called Boosters to do the half-time show. Of course, we all were desperate to make the team, and were thrilled when we did. But it kind-of ruined it a little when some “too-cool-for-school” (literally) seniors would show up in street clothing because they thought they were above participating in the activities. And it totally embarrassed the girls who desperately wanted to make the team but didn’t.

I feel that if you’re lucky enough to get a privilege that few other citizens have, you need to step-up to the plate. Literally, in the case of the baseball players!

–I never knew much about Curtis Granderson until I heard what Vin Scully had to say one time last year, when the Yanks played the Dodgers in inter-league play. His parents are or were teachers, as were mine, so I can kind-of picture his upbringing. Except my ‘rents insisted we all become teachers, too. (We all see how well that worked-out for me, right?)

But I’ve rarely heard him speak before last night. He was talking about a charity he’s involved with (I know he helms the Grand Kids Foundation, but this might have been something else—it was to get seniors in high school to pitch in in their communities, which is a wonderful idea,) and I swear, that guy could be a politician—he’s so well-spoken, intelligent, and engaging! He’s also a college graduate with a degree in business administration. How many major league athletes can say that??? The Yankees are just getting better for me all the time, as people. 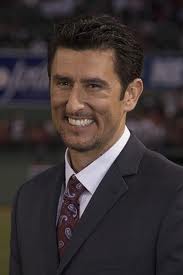 –I love Nomar Garciaparra as a broadcaster.  He’s actually one of my favorites.  He’s fair, intelligent, has a great voice for it, and is sort-of really good-looking, especially in a suit.  I can now understand why Bostonites loved him.  At the same time, though, I’m glad I didn’t realize any of this when he was playing against my beloved Yankees.

–Because my beloved Mets played the Dodgers recently, I got to watch them on the local Dodgers station, giving me the opportunity to marvel at eighty-three-year-old Vin Scully once again. I always forget that he does the entire broadcast alone, which is a rarity, let me tell you. Nowadays, everyone seems to sportscast in not only pairs but trios!!! Even talk show hosts need a sidekick. Or, at the very least, they have to riff off the audience.

When I was doing my show, Karen’s Restaurant Revue, I talked by myself for a half hour straight on each episode, with no commercials, and no proceedings to comment on, such as a baseball game, and people marveled at that, too. But it was so natural to me. (Much easier than writing, let me tell ya.) 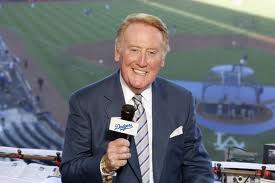 But, since I’ve never seen anyone else do it, I finally had to admit, if only to myself, that what I did was somewhat special. But I had to do it just once a week! (And down the line, once a month.) Mr. Scully is doing it every day!!! At eighty-three! He’s a wonder!

I’m nowhere as accomplished as he, but still, it made me query why none of the guys who watched both local sports and my show never compared the two of us. There’s no one else who does this one-person bit. I never even made the comparison before! What’s wrong with all of us?!

There is one big difference, though: At the end of his telecasts, Vin says, “Goodnight, everybody,” whereas they had to use a hook to get me off the air. Maybe that’s why his television career has outlasted mine.

–I can’t believe that Bob Lee, a sportscaster for the Women’s World Cup, was interviewing two of the players, and said the next-to-last word in the following: He was talking about something being between the two of them, and said, “…even inter-personally. Even, perhaps, between ‘yous two.’ ” Yous! Without batting an eye! The girls didn’t, either. That’s shocking!

–How’s this for low? The IRS is going after the fan who caught Derek Jeter’s 3,00th hit ball, even though he’s not selling it or trying to profit from it in any way!!! But, since it was announced that the Yankees organization gave him four tickets for each game for the rest of the season, including play-offs, (knock on wood,) and some signed memorabilia, the government wants the kid to pay taxes on those items. You can’t even be a good guy anymore in this world. Disgusting.

–And, looking back to the tragic topic I began this column with, you would think that everyone who attends baseball games from now on, especially in the immediate future, would be more cautious about leaning over the railing, especially to try to catch a ball. I don’t think that’s a big supposition. But there was already a close call at Monday night’s Home Run Derby, by a guy standing on a table top along the railing, wearing flip-flops, and leaning over! Now that’s an idiot. I guess some people will never learn, no matter what.

[Note: tomorrow’s column will feature my non-sports musings, and will cover everything from Adam Levine to the “trial of the century” to jailhouse tattoos. Talk about eclectic!!!]

[Note #2: Uh-oh. I just remembered the Espys are on tonight! So, there may be a tad more sports thoughts tomorrow. But they’ll be gossip-y ones.]