OLYMPICS REVIEW–DAY SIX (OR: JOHNNY WEIR GETS SCREWED ONCE AGAIN!)

I’ve been so busy watching the Olympics that I haven’t had time to write about them!!! (Well, that, and I’ve been dealing with my own pre-Olympics injury–I wore high heels to an event a few weeks ago and messed-up my back! Really lame injury, but it’s been hurting too much to sit at a computer and type. Now, thanks to my genius physical therapist pal in Vegas, Lori Skophammer, today I’m finally on the mend after two not-fun weeks.)

But I have a lot of Olympics thoughts, especially on the figure skating competitions, of course. But first to the opening ceremony. (And yes, “ceremony” is singular, not plural like many of the less-than-brilliant sportscasters call it. It’s just one ceremony, not two or more.) The organizer said he was going a different direction than that of the truly mind-boggling, amazing, stunning Beijing spectacle two years ago. And trust me, he accomplished what he set out to do! And that’s not a compliment.

The whole event was okay, but pretty weak by Olympics standards. When one of the featured performers (to the zillion or so spectators) is a poetry-slam guy, you know they’re not bringing in the big guns. The two best parts were k.d. lang singing Leonard Cohen’s anthem, Halleluiah, and The Great One, Wayne Gretsky, being the final torch-bearer.

But there’s not much excuse for the mechanical difficulty that the flame cauldron experienced. And when they realized that the fourth arm was not going to make it to the surface, they should have told Wayne to switch positions with the poor girl former athlete who just stood there with nothing to light, because Wayne was going to get his turn lighting a second one outside, which was kind-of dumb, too. (They technically had to have the second, though, because the Olympics rules state that the flame must be seen at all times during the games, and the stadium is domed, so no one could see it from outside.) 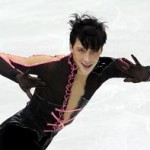 Now to some competition thoughts. I really need to discuss that the judges totally screwed Johnny Weir in the short program last night! He deserved at least five more points than they gave him. As Mr. X said, they marked Johnny himself and not the actual gorgeous performance. What is wrong with these people? They seem to always reward the creepy Evan Lysacek for no reason.

I hate to admit that Evan is a really good skater, but there’s just something so lacking. Maybe it’s because I’ve seen him be a bad sport and excuse-maker for so many years now. Or that the exuberance he exhibits at the end of his programs is so fake. He even said on the Today Show the other day that he builds it in, which kind-of tricks the audience into thinking that they just saw something great. (I wish I had thought of that when I was still hosting my TV show! Hmmm, maybe I’ll start doing that in daily life.)

To me, all he does in his footwork sections is flail his arms and throw his legs in the air. Johnny’s skating is just so much more special and beautiful. (And I’ve met them both several times, and I cannot even tell you how much more fun Johnny is. He’s a tad out there, but has a fun sense of humor and is kind-of down-to-earth in his own flamboyant way. At least he’s not pretending to be anything other than his true self.) And I think that Johnny being Johnny is influencing the judges. Even the attendant audience booed his way-too-low scores. Mr. X said he doesn’t even want to watch anymore when it’s not being judged fairly. Now we just have to wait and see what the long programs bring. 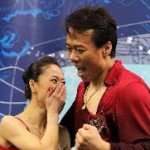 On much happier Olympics notes, there have been two wonderful results so far. First in Pairs Ice Dancing. The amazing Chinese pair team of Shen Xue and Zhao Hongbo finally won gold in their fourth Olympics!!! The first was a throw-away, and don’t get me started on the one where the Canadians wound-up tying the deserving Russians, with Hongbo and Xue getting the bronze. I thought they deserved the gold in 2006, too, but again, they came away with bronze. They had retired from amateur competition after that, but came back just to try for the gold. They finally got what they deserve and it was very emotional. And they’re both in their thirties, in a very young person’s sport. Good for them!

And the other Chinese pair, Pang and Tong, came from fourth in the short program to take the silver in a stunning performance. The pairs competition yielded very happy, and fair, results. We can only hope for the same judging in the three other disciplines. 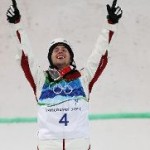 The other wonderful result came in the Men’s Moguls portion of Free-style Skiing. It was won by Canada’s Alexandre Bilodeau, a most deserving athlete. This was the country’s first gold medal in an Olympics on home soil, so he became an instant hero. And his story couldn’t be better. He took-up the sport as a child because he wanted his older brother, Frédéric, who has cerebral palsy, to be able to participate in his sport with him, and that country’s passion, hockey, was too hard. Alexandre truly loves his big bro, and means it when he says that he’s his inspiration. I’ve seen many interviews with this guy, and he appears to be sincere, lovely, and genuine. For me, he’s the happiest story of the Olympics thus far.

That’s it for now. Got to get back to watching them!!!