[Note #1: I’m sorry I didn’t get to live-tweet the Final, but my internet was down. Shame. And this article would have been published yesterday morning, the day after the night before, but the same sad condition applied. So, now that it’s all fixed, here we go. Thanks for your patience.]

[Note #2: In case you want to catch-up with my thoughts leading up to this past week-end’s Final Four, you can read them here: itsnotaboutme.tv/news/sports-march-madness-2014-so-far.] 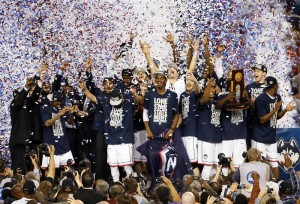 First a thought on my relationship with the tournament itself: I still love March Madness as much as ever, but I think I’ve tried to curb my feelings while watching it since UCLA’s crushing loss in the 2006 final to the Florida Gators. I was watching in a New York city bar, that was taken over by my fellow Bruins, with my great friend, and often partner-in-crime, Lila Aviv. She and I had met through the UCLA team who won it all in 1995, and have been bonded ever since. To witness such a horrible loss for our guys, with all in attendance being equally sad, took a lot out of us. But it didn’t permanently dampen my desire to continue to watch the extravaganza.

Now, let me share what’s gone through my mind on this topic from the Final Four to Monday night’s Championship game, where the more mature UConn defeated the freshmen of Kentucky.

It wasn’t as exciting a tourney as usual, but there were a record-tying seven overtime games during this college basketball tournament! Wow.

During one of the two pre-Final Four game telecasts, sideline reporter Tracey Wolfson, whom I usually don’t mind, said, “There has been so many comparisons…” How illiterate of her.

This picture is apropos of nothing, but let it serve as a lesson to all males: Look at those nose hairs, sticking out of both sides, no less, on announcer Jim Nantz! Men–please groom those suckers! Photo by Karen Salkin.

And, in clips they showed of the entire tournament, one of the Gonzaga players said this after their third round defeat: “Even though we lost, we still lost as a team.” Duh! It’s a team sport! How else would they lose?!

I finally rooted for Florida, for the first time ever, (because I’m such a fan of fairness, and they really deserved to win this year,) and look at how that turned-out for me. I’m so sad for those guys, especially the many seniors.

There’s even one guy on that team, Jacob Kurtz, who used to watch them practice every day for two months straight. When coach Billy Donovan finally spoke with him, and found-out how knowledgeable he was about the game, he made Jacob a team manager. The next season, Jacob made the team! As a player! How’s that for a good human interest story?!

Florida’s Patric Young was so nice to the guys on the team that had just defeated his! I loved seeing that.

The only good thing about the Gators’ loss is that I didn’t have to keep hearing the commentators mispronounce “Florida!” (Many of the idiot commentators pronounce it “Float-a.”)

I love that Charles Barkley called people idiots, too!!! That’s what I always do, (as you can see in the above sentence!)

After both my teams lost on Saturday, I wrote, “Worst tournament ever. I’m sick over it.”

I can’t believe the Final was between seeds #7 and #8! That’s a first!

Kentucky’s Aaron Harrison won the three games before the final for his team with the last shot, all three pointers. Interesting.

But I was really rooting for Wisconsin to beat them in the Final Four. Sad.

Even when I don’t have a team I really care about, I’m too much of an Empath to just enjoy the drama and last second heroics. I hate that one team can lose at the very last split second. 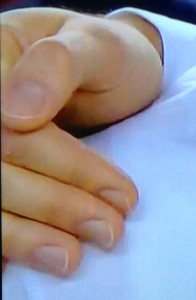 Conversely to the photo above, look at these gorgeous clean nails on the hand of a UConn player! (I’ve searched for his name, to give him props, to no avail.) That’s what all men’s hands should look like! And I’ll bet this dude has nary a nose hair in sight! Photo by Karen Salkin.

As painful as it all is to all but one team, these players and coaches and families have to think if they’d rather not have this pain, or just not be in the tourney at all. I’m sure they’d all choose to be in the game and lose than not be chosen at all. I hope that helps them.

Charles Barkley cheered me up a bit afterwards by saying that all but one of the Wisconsin Badgers is coming back. I was so depressed for that team to have lost in the final seconds like that.

And lastly, here’s the answer to my question last week of who was my MOP of the tourney: Charles Barkley, of course! He was the bright spot of the whole tournament. I can never miss the segments with him, just in case I’ll miss one his bon mots. I don’t even start speeding through the ads early, because he says stuff as they’re going to commercial often.

[Note #3: Not to compare myself to him–at all–but one of the absolute biggest career compliments I ever got was from morning show doyen, Steve Edwards. He told me that he loves working with me because I make him somewhat amusing. And that’s what Charles does to everyone around him. He makes even Kenny Smith get off a funny line or two on many shows, which is hard to do.

Years ago, when several show biz honchos were still trying to produce a talk show for me, I was asked who I wanted as a co-host; I always answered, “Charles Barkley.” And that was before his TBS and TNT days! Everyone thought I was crazy. But he’s the male me on air; he says whatever comes into his mind, with very little filter. And it makes for great television, even if I do say so myself. But, with both of us like that, especially back in the day, when execs were always worried about what I might say, it may have been too much for the public to handle. I would have loved it, though!]

Charles Barkley, on the right, cracking-up his commentating panel.

But, as this e-zine states, It’s Not About Me, so I got a little off track here, in my lauding of Sir Charles. [Note #4: He said something so funny after the final game, that I have to share it with you who may have missed it. I’m sure it’s also a little offensive, but oh so funny. When they were showing clips of the entire tournament, including victory celebrations in the locker rooms, there were a couple of segments of white coaches doing strange dance moves. On-air, Charles told fellow commentator, Clarke Kellogg, “Not only can they not jump, they can’t dance either.” They all tried not to laugh, but just couldn’t help themselves.]

Let me end by congratulating all the college men who played in this historic tournament. And remind them to just be proud and happy that that they had the experience. Big props to all concerned.