We’re now down to just three more games in the 2014 NCAA Basketball Tournament this coming week-end, so I better share my thoughts on what we’ve seen so far of this year’s March Madness.

This college basketball tourney is finally narrowed down from sixty-eight teams to the Final Four, which is a big deal for these young players. But not without just a touch of the usual drama.

Even though I don’t feel there have been any amazing stories, like a team from the First Four making it through to the Final Four, like we’ve had in recent years, (or the crazy success of eleven seeds George Mason in 2006 and VCU in 2011,) it has still kept me pretty engaged.

Here are just some of my random thoughts on the proceedings, as the tournament has progressed: 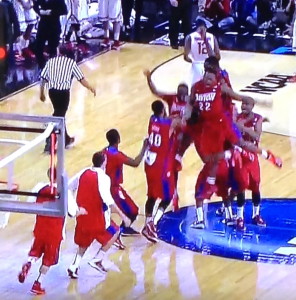 Everyone goes out a loser except for one team!!! Period. So, it’s weird when seniors say things like, “It’s tough to go out like this,” which is a direct quote.

Outside of Doug Gottlieb, who sounds like a member of the Lollipop Guild, and his on-air partner Spero Dedes, who dentalizes way too much for my taste, I really did enjoy all the game-announcing teams. My favorite this time was Andrew Catalonia and Mike Gminski. Andrew so not makes it about him, and Mike has the perfect announcer voice and speech. I can’t define it, but I definitely know it when I hear it. They just move it along and stay out of the way. No jokiness or phoniness. [Note: Andrew did get in trouble, though, for a Polish slur, which he thought was a good joke. So, shame on him for that.]

But to most of those TV commentators: Stop saying “float-a” for “Florida!!!”

I really really love that Charles Barkley keeps stressing that these kids should “stay in school and get your education.” I really respect him for that.

Harvard doesn’t really have to feel bad about their (so-called) third round loss. (It’s really the second round for all but those first four teams, so I feel that they need to call it as such, and name that first four round something like the “opening round,” like I believe they used to. Even “First Four round” will do!) Those Ivy League players can take solace in the knowledge that they’re smarter than every other team in the tourney, and therefore have brighter futures. (If only it really worked that way in real life. I’d be all set!!!)

Why are most of the sideline reporters girls, and mainly blondes with ringlets, to boot??? 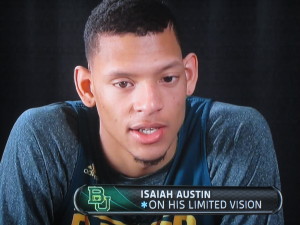 Baylor’s Isaiah Austin. Can you tell which eye has the vision? Photo by Karen Salkin.

I love Baylor’s Isaiah Austin. That kid sees out of just one eye! Pretty amazing, especially for such a good player!

I lost all four games on the first day of the Sweet 16, and now I have no more ponies in the show. Shame. (It turns-out that it really is a tad less painful when you don’t have a real dog in the race.) Mr. X was done the second UCLA went out, but, being the crazed sports fan that I am, I’ll hang in until the very end. But, if those Florida Felons* win, I just may be done with the NCAA tourney forever! *[Note: Please read the next paragraph immediately!]

I can’t believe that I totally changed my mind right after Florida’s victory in the Elite Eight! I realized that I was still holding the horrible 2006 Championship win over UCLA against them, even though this is a totally other cast. I forgot for a few minutes what a fan of fairness I am, and these guys really do deserve the championship this year. They’ve won far more than anyone else, including thirty in a row, and missed-out on the Final Four for the last three years. If I understand it correctly, Patric Young even stayed in school, foregoing the NBA, just for this opportunity. You’ve got to respect that. I’m still not a fan of sometime trouble-maker Scottie Wilbekin, although I can not find out what he did to deserve two previous suspensions, and the coach telling him to transfer elsewhere. But fair is fair, so now I’m rooting for them to win the whole shebang. (But if you know any Scottie deets, please share them in the Comments section, below. I’m dying to know what’s up with that!)

Mr. X asked how I could be watching the non-competitive second half of the Baylor-Creighton second round game, especially on DVR three days later, but I explained I’m all about the journey. And this was a wild one. (Lower seed Baylor beat Creighton…by thirty points!!!) 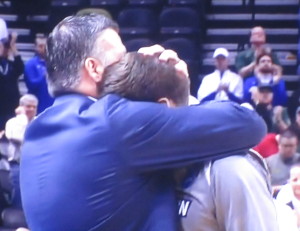 Creighton coach, Greg McDermott, hugging his senior son, (and one of the best college players in the country, due to go high in this year’s NBA draft,) Doug McDermott, after their second round loss to Baylor. Photo by Karen Salkin.

I loved that the Creighton coach called each of his players out of their last losing game on their own, and hugged them all, smiling all the time through the awful loss.

I bit the gels right off my nails off during the last two games on Friday night!!! (Michigan State over Virginia and UConn over Iowa State.) [Luckily for me, I know as much about nails as I do sports, (meaning “a lot,”) so I was able to fix them right away, with minimal damage. I’m sure you’re all breathing a sigh of relief over that info!]

After the UCLA loss, I’ve been rooting for seniors. I’m especially sick for Michigan State’s Adrien Payne. I’ve been a fan of his for awhile now, since I first heard of his friendship with a little girl who has cancer. Not to mention that he had a way-too-hard upbringing. Note: Having lived in Rhode Island for a few of my early years, I also root for URI and Providence College, but the former wasn’t in it this year, and the latter lost in their first game.]

It was so nice of Michigan head coach, John Beileim, to say what a great game at halftime, even though the other team had just tied it up, after being down by ten. (His team eventually lost that game.)

In my ongoing efforts to give credit where it’s due, I have to laud Kenny Smith for his dribbling skills. I’m so not a fan of his trying-too-hard commentating, but his fellow panelists asked him to show some dribbling last week-end, on a half-time or post-game show, and it was pretty impressive, especially for a guy who’s been out of the game for some seventeen years!

I’ll share my thoughts on the final three games, including the Championship, of course, next week. And I’ll give a shout-out to my MOP (Most Outstanding Player) of this tournament. Here’s a clue—it’s not one of the players! (If you think you know about whom I speak, feel free to give me your guesses in the Comments section below. I am a tad curious to see how well you all know me. I have a feeling Mr. X and my former Sports Radio partner will get it right.)