I had a whole different column planned for today, but Kim Clijsters just lost at the US Open, and I’m so upset that I just had to pay tribute to her right here and now. I was planning to do it at the end of the tournament, after what I was hoping would be her fourth title here. But, alas, it was not to be.

Kim had already announced that this would be her last tournament; she’s retiring, for the second time, immediately after. (She’s still in the doubles and mixed doubles; hopefully, ESPN2 will show us some of those matches as we go along. Fingers crossed on that one.) So, we were all prepared. Somewhat. I just don’t think any of us was expecting her to go out in the second round, especially to a young, low-ranked player. I know that I was definitely not prepared for that eventuality. And I have a feeling neither was Kim. 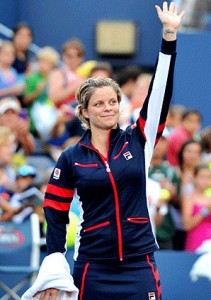 Always the classiest lady out there, she spoke after the loss without so much as one teardrop coming down, while I was sobbing like I was the one who’s moving on! (Pam Shriver, who was doing the interview, had to control herself, as well, because her voice was cracking as she asked the questions. It seemed that several of the commentators had that problem as the day wore on, every time the subject of Kim’s leaving came up.)

[Sidebar: It’s no secret that I always wanted a twin, for many reasons but mainly because I’m, by far, the most fun person I know! (And, because I’ve always wanted to see what I really look like in profile!) But, listening to her speak so soon after that last defeat, I realized I don’t want a twin; I want Kim Clijsters to be my sister!!! I can not imagine anything better than that!]

For those of you who don’t follow tennis, and are wondering what the big deal is, let me break it down for you: Kim Clijsters is known far and wide as the absolutely nicest girl in tennis! Or probably any sport for that matter!

And in a business where you really have only yourself to rely on while you’re on the playing field, that’s highly unusual. She always double kisses her opponents, win or lose, and hugs most of them. No cursory handshake for her. I’ve never heard of anyone who dislikes her. Unlike some of the top players, (without naming any names this time because I want no negativity in this article,) who act like bad sports all the time when things aren’t going their way yet have a phony smile for the people they beat, Kim’s genuine and kind all the time. Everyone loves her!

Before her first match of this tourney on monday night, she was counseling her young American opponent before they took the court, to make the girl be less nervous! And Kim asked for a photo with her after, rather than the other way around! Can you imagine any other player in the world like that??? No one can. Even Chris Evert said she’s never seen another player so kind or supportive in the locker room.

So, to lose someone like that is just downright sad. I seriously don’t have many females to root for nowadays. I’m just hoping that someone else kind comes along. But I’m not holding my breath. As a matter of fact, when I just told Mr. X of her defeat, he was shocked, and asked, “Why are you going to watch anymore?” I was thinking the same thing myself.

I know Kim wants to have more children, and open a tennis academy in her native Belgium. There will be no finer mentor for those kids than she. She’s been injured a lot this year, and it was probably time to pack it in; she just confirmed in her on-court interview that she was planning for this tournament to be her last one, and added, “But not today.”

Now it’s time for me to collect myself, and try to be even a fraction of as classy as Kim, and wish her well. Here’s to many more victories in life for her! You went, girl!