Here’s something that I don’t think many of you know about me—I absolutely adore the Queen! I actually get choked-up whenever I even see pictures of her.

Not only is it truly amazing that she’s still serving at age ninety-six, but she’s the brightest and most aware nonagenarian ever! I’ve never seen anything like it. 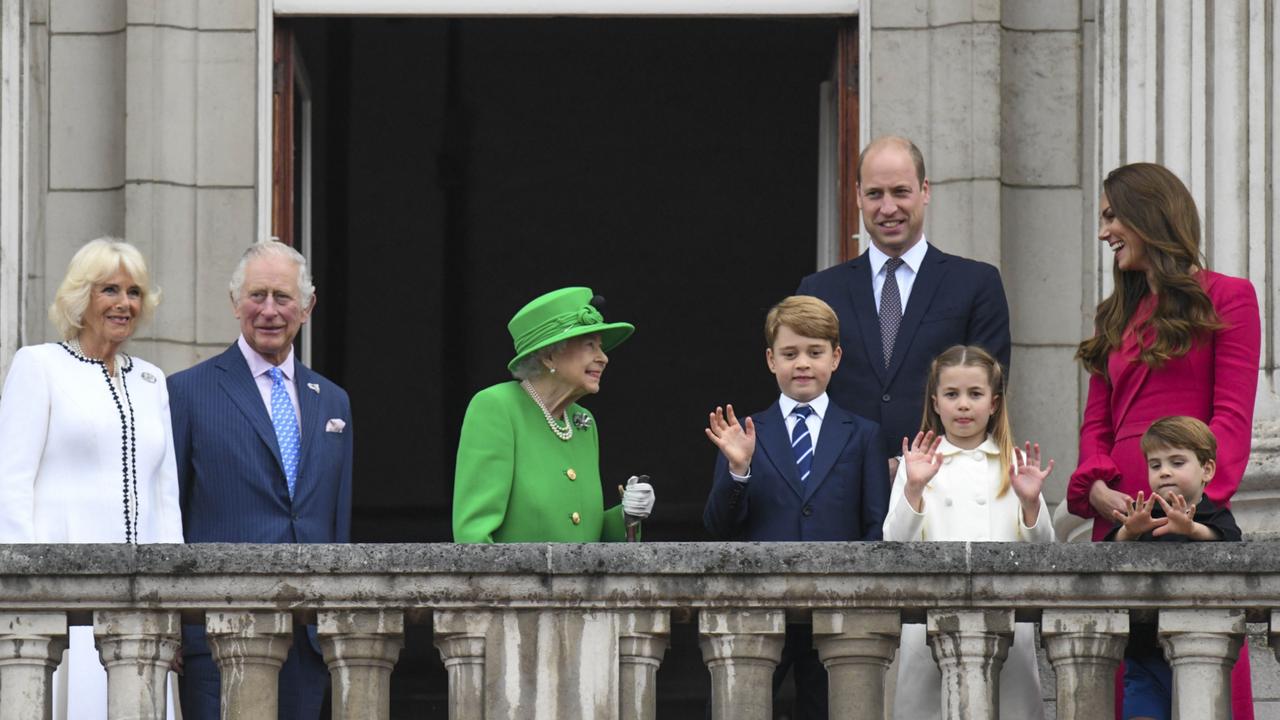 The Queen making a surprise balcony appearance to close out the Queen’s Platimun Jubilee. Notice how she and Kate are sharing the moment. Also of note is that the four people in the center of the image are the Queen and next three in line to the throne–Prince Charles to her right, and Prince William and Prince George on her left. I adore this picture, on every level!

And she always looks perfect in all of her colorful monochromatic suits. Not just the ones for these celebrations, but throughout the later years of her seventy-year reign. Her designers are brilliant!

I’ve had so much going on recently that I didn’t stay up overnight, nor get up very early, to watch live all the proceedings of the recent four-day-long Queen’s Platinum Jubilee celebrations (as I’ve always done for big British goings-on.) But I did follow them in the news and on-line. And I’m still trying to catch-up with the coverage of all the events on my DVR and streaming services. 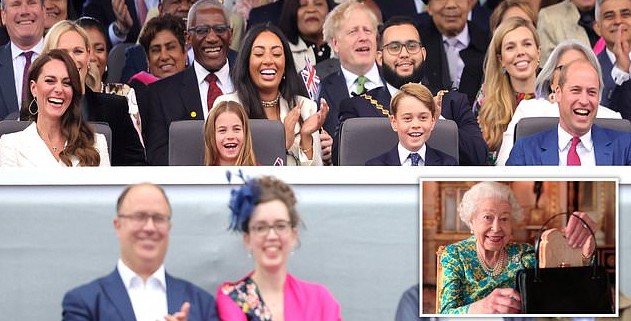 The Cambridges (and others) laughing at the Queen’s hilarious comedy bit to open the Platinum Party Concert.

Truth be told, I wish I had been better prepared for that once-in-a-lifetime event, time-wise, because it was all quite fabulous. Even though I knew it would be here soon, it seemed to suddenly be upon us before I was ready! Mr. X and I usually feast on a major Afternoon Tea repast while we’re watching the Royal Family’s happy events, (no matter what time of day we’re viewing it all.) This time, though, I didn’t plan properly. But I did make a crumpet run that day, which made our festivities that much more fun.

For the Saturday night music extravaganza, (which I was thrilled to see my old pal, Adam Lambert, open as the frontman for the appropriately-monikered group Queen; it must have been the thrill of his lifetime!,) I chose to make it a Cream Tea this time. I served the crumpets, (toasted, of course,) with strawberry jam* and homemade clotted cream, which I whipped-up an hour or so before. And, of course we enjoyed them with English Breakfast tea with cream and honey. Not only was it all absolutely delicious, but perfect for the special occasion. *[Note: I was too scared to buy real strawberries this time because many brands of them have been linked to this country’s hepatitis outbreak!] 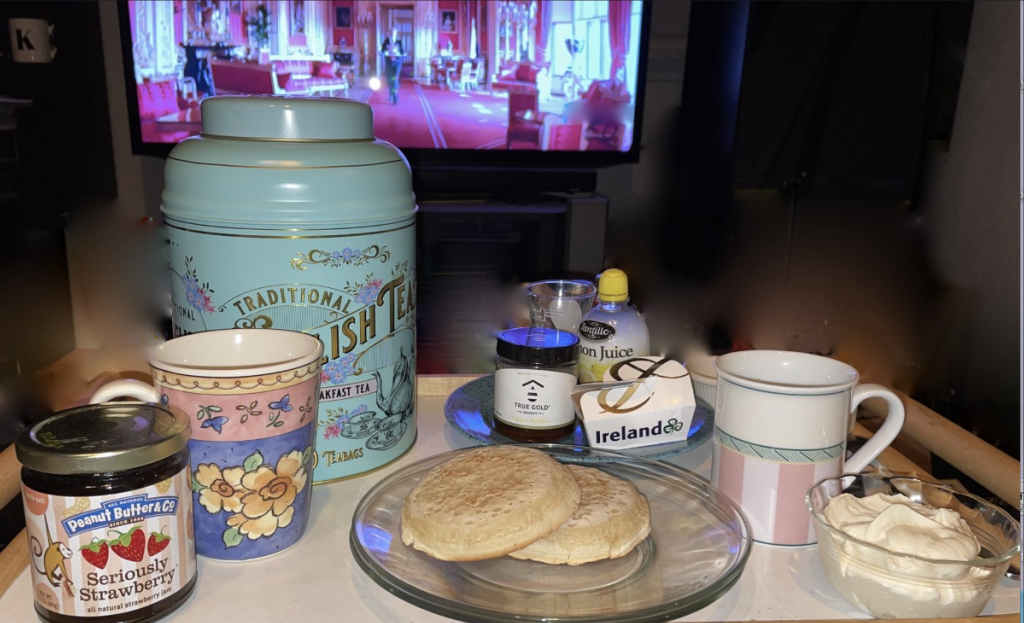 The Queen’s Platinum Jubilee celebrations actually began three weeks earlier with the Royal Windsor Horse Show at Windsor Castle. That featured one of my favorite moments of the entire Jubilee! It was the Queen modestly shrugging when the Master of Ceremonies lauded her to the assemblage.  Adorbs.

Even more adorable was my other favorite image from this week-end. It’s the Queen chatting with her four-year-old great-grandson, Prince Louis, on the balcony during the Royal Air Force Flypast that first day of the Jubilee. It was one of the most charming things I have ever seen. I love that Louis kept turning to the Queen to talk, rather than to his siblings or parents. I could watch that all day.

Just look at the Queen chatting with Louis!

I also adored that incredibly funny video of the Queen having tea with Paddington Bear, which opened the Saturday night festivities! I almost lost my own tea when Her Majesty showed him that she keeps her marmalade sandwich in her purse!!! OMG—what a great surprise! And what a sense of humor Ma’am has!

Another great surprise for us all was that she showed-up on the balcony at the end of the four days. After dropping-out of all the events on Friday and Saturday, due to “mobility issues,” her appearance on Sunday gave everyone a big thrill. The people went wild when they saw her! As did I. (I just hope that they all, as I did, spared a thought for the Queen’s beloved husband of seventy years, Prince Philip, at any time during the Jubilee. I’m sure she was missing him especially, throughout those days.)

Now I sadly predict that the Queen will step down shortly. That way, she can watch her heir, Prince Charles, ascend to the throne. No one could have ever done better than she in her role as head of England and the Commonwealth for lo these many decades, and it definitely appears that she still desires to continue on, but she deserves to rest a bit now, and enjoy watching her family take the reins. (And reign!) 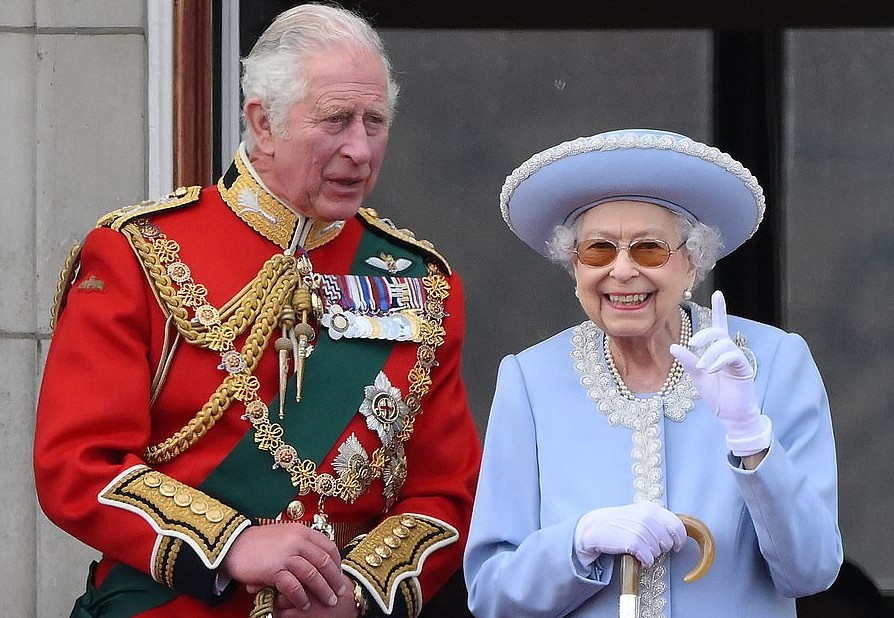 The Queen with her heir to the throne, Prince Charles.

Before I move on to other aspects of this overall topic, I have to explain a bit of what we saw during the Jubilee, and why. None of the American television commentators I saw seemed to know what was what with the various celebrations last week-end, so I’m here to clear it all up for you. Trooping the Colour is basically a military display that has occurred every year for almost three centuries! It marks the birthday of whichever British monarch is on the throne at the time. Even though Queen Elizabeth’s birthday is in April, the ceremony for her always takes place in June.

This year, it was incorporated into the four-day Jubilee which celebrated the anniversary of her reign. Jubilees themselves do not take place every year; they are to celebrate specific occasions. This time, it was the Queen’s Platinum Jubilee, to celebrate seventy years since she took the throne! (Her ascension to the throne actually happened in February 1952, but they always wait until warmer months to throw the Jubilees.) 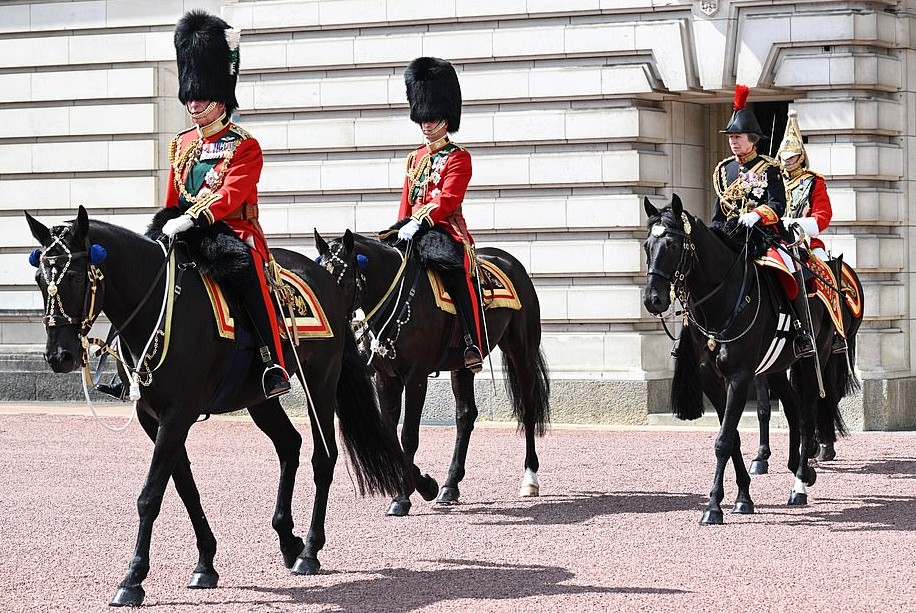 (L-R) Prince Charles, Prince William, and Princess Anne leading Trooping the Colour for the first time, in place of the ever-present-before Queen.

All of the festivities and pageantry made me sort-of regret that I didn’t take any British producers up on doing a talk show in that country, many years ago, when I was still doing my TV show here in Los Angeles. I was approached by a few different companies back then, and as attractive as the offers were, I knew that Mr. X’s career was here, which meant he couldn’t come with me, so I declined all of them. Oh well. That’s my own road not taken.

I console myself with thinking that perhaps Her Majesty saw one of the many clips of my show that used to be featured on Britain’s Channel 4 series, Made in America. Those producers requested to use my clips all the time back then. So, you never know. I can just hear her saying, “What a loony young lady that is!!! Whatever is she going on and on about?!” (But she would have adored little Bud, The Wonder Dog, and Clarence, The Singing Dog, for sure!!!)

Now let’s get to the rotten Sussexes return to England for the week-end. Yes, I still loathe those two. But I must say that while I’m grateful that they deigned to finally introduce Harry’s beloved granny to his one-year-old daughter Lilibet, whom they slyly named after the monarch. At times, I felt that Harry was missing his family and old life. And though still very much in love with his controlling wife, I believe I saw him going through a bit of regret for leaving the Firm. And in such an awful way. And then skewering them in public like he did with that despicable television interview. 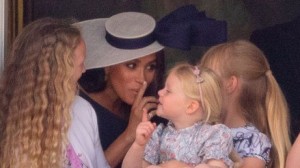 Megan doing her best to get photographed at the Jubilee by leaning down into the frame with the Royal children she knew the photogs were aiming for.

And let’s not forget his creep of a spouse. At least she kept to her agreement with the real Royals, and behaved herself for the duration. For once, she knew enough to not try to make something about her. I think she knew how even more reviled she’d be if she had. (I love that I saw an article recently about how their popularity in America is “at an all-time low.” When was it at a high??? I have a news flash for them–no one in this country cares about them!!! At all. (I just hope that they all, as I did, spared a thought for the Queen’s beloved husband of seventy years, Prince Philip, at any time during the Jubilee. I’m sure she was missing him especially, throughout those days.)

And it’s so creepy that they’ve let it be known that they invited the Cambridges to their daughter’s one-year-old birthday party over the week-end, without that fam showing up. So here’s another newsflash for them: That little “low-key” fete was during the Queen’s Platinum Jubilee! Kate and William are working Royals! They were during their royal duty and were in Wales meeting the public that day! Their trip was planned for months, if not even a full year!!! (And actually, apparently hardly anyone showed-up to the birthday gathering, outside of Harry and Megan’s photographer with his wife and kids!) 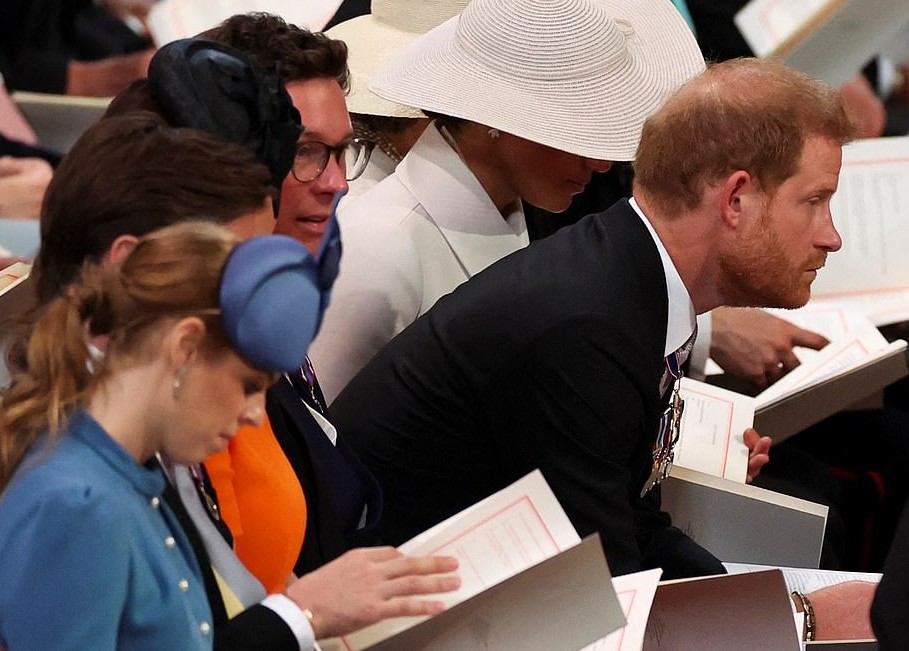 Harry at the Thanksgiving church service, appearing to be regretting his decison to not only leave the Royal Family, but to try to disgrace them!

Even worse than his younger-self decision to wear a Nazi uniform to a costume party in 2005 was his choice of bride. I think he was so desperate to be loved that he latched onto the first woman who dug her claws into him, without him realizing her motives. He has always let her manipulate him, even into going against his family, who had always been there for him every step of the way. It’s been a shame to witness.

And one tiny note about Prince Andrew—whoever thought of saying he had Covid, so no one could discuss his absence, is a genius!!! It’s a very plausible situation, so no one can really question it. Except for me, of course. But, either way—brilliant!

And that’s it for my take on the Queen’s Platinum Jubilee! Well, not really, but if I continued on with all my thoughts on the proceedings, we’ll be here until her Centenary Jubilee!