MY ANNIVERSARY WITH LOS ANGELES…AGAIN!

Yesterday, July 27th, was my anniversary with LA, which I celebrate every year. I can’t believe that I’ve been in Los Angeles since I was a teen-ager, and I still love the place as much as I did then! My affection for this city has never, ever wavered. I could not imagine living anywhere else.

A few years back, after bringing me to his beloved Santa Fe several times, Mr. X, (whom I love more than anything, and stalked until he acquiesced to be my beau,) told me that, at some point, he wants to move back there, to where he went to college. My immediate response was, “You mean we’re breaking-up???” Very supportive of me, right? But I’ll never leave LA!

Many people over the years have asked why I never threw my hat into the ring to be a host on The View, (or had an agent or manager do it, neither of which I have right now, anyway) and my answer is always the same. Even though I also have lots of affection for my native New York, I could not leave LA. I had actually been in talks a few times to have my own talk show in London, and no matter how much I love taking authentic Afternoon Tea, same thing—I just can’t move away from LA. It’s not in my heart and soul to do so. 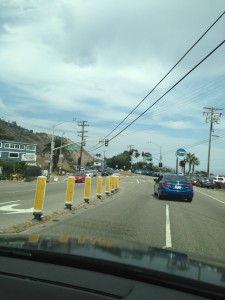 So, yesterday, Mr. X and I went to the Malibu Arts Festival to celebrate because I rode down Pacific Coast Highway from Big Sur with strangers on that very first July 27th, and have never looked back. I’ll make a note now for next year, to tell you the whole fun story of how I got talked into staying here, but now I have to tell you what else we were celebrating yesterday because it’s funny. And it’s the only way I could get Mr. X to come back to the festival with me this year because it’s just not his kind of thing.

Last year, he didn’t mind accompanying me because I was in the throes of the torture that both of my hands were going through, and he would have done anything to cheer me up for even one second. The extreme pain I was in prevented me from doing much for those many months, but at the time of the fair, I was only a fortnight into the ordeal, and was, therefore, still hopeful. And I’m known for trying to not allow a bad event to prevent a good one. So, I tried my best to do at least a couple of fun things last summer, as long as I had someone with me who would not mind being my “hands.”

So, along we went to Malibu the same day last year, me trying to look somewhat okay in a cute mini-skirt, as usual. As soon as we got to that beach city, we realized it was freezing there. (Well, freezing compared to the usual heat, like we experienced yesterday.) Mr. X, being the always-generous guy that he is, immediately suggested we go into one of the high-end shops there, (is there any other kind in the ‘bu?,) and buy me some pants to change into.

I really do hate buying super-expensive wardrobe not on sale, (you can take the girl out of Brooklyn, but…,) no matter who is paying for it, so at first I resisted. But he was right, so we looked around. (We actually probably spent more time trying on clothing than at the fair itself!) 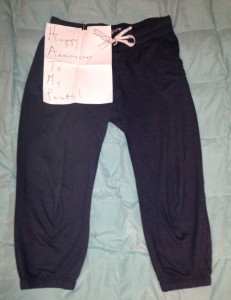 This is how I left the pants out in the morning, as a hint to Mr. X that we had to celebrate their year anniversary! And, no, I’m not short; they’re capris. Photo by Karen Salkin.

The sales woman in the store we chose was kind-of nasty, and was annoying me, making it harder to find something I would love enough to pay top dollar for. Just as I was finally going to give up, (mainly to get away from the rude woman,) Mr. X found adorable pants that had just been put on display right then! Talk about top dollar! But they were perfect, and he talked me into them, for which I was very grateful, and still am.

But me being the practical person I am, I kept thinking of how much he had paid per wearing, at the beginning. It became a big joke with us. (But I did try to wear them a lot at first, and they have come in handy more times than I care to acknowledge to even myself.)

I lost track of the PPW (price per wearing) a long time ago, but they were supremely useful yesterday. At first, Mr. X was very resistant to the idea of traveling to Malibu on a week-end, and is sort-of done with my anniversary celebrations, anyway. [Note: If you want to know exactly what I do every year, read this: itsnotaboutme.tv/news/miscellaneous-l-a-and-me. You’ll soon understand what he has tired of it.]

But I told him that this time, the Malibu trip was not solely to celebrate my anniversary with LA, but rather to wish a Happy One-Year Anniversary To My Pants!!! He, being almost as nutty as I, went for it! (But, when I first broached the subject with him, his exact quote was,”You’re scraping the bottom of the barrel with these celebrations, Ka!”)

So, there you have it. Another crazy fete in my glamorous life! And we had fun. (Well, at least I did!)

And…Happy Anniversary to LA and me! And, of course, my pants!