HAPPY HALF BIRTHDAY TO ME!

I just realized last week that I have never memorialized my half birthday in this e-zine before! How did that happen? (Or, more correctly, not happen.)

I’ve always been into my half birthday, but rarely celebrate it, unless I’m with French people, of course. (Just joking about that last part because it’s also Bastille Day, so Bon Anniversaire to us both!) 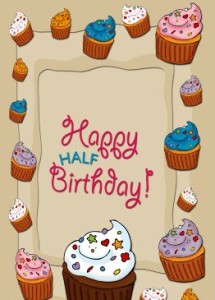 But today, I’m planning to have a good one. I’m going to one of the very first industry screenings of Get On Down. And I’m going with my James Brown expert—get ready for it–Mr. X! He has been a fan since he first saw James’ fancy footwork way back in the day, so I’m hoping he’ll love this film. Actually, he’s the one who told me it was being made to begin with, way before I heard of it myself! And I read a lot of show biz stuff, so I don’t know how I missed this one.

Anyway, my review of this film will follow in the near future. Screening season seems a tad early for me this year, so I have to get my reviewing brain ready for it.

But back to my half b-day, which I’m sure you’re all riveted to this page to find-out about.

Even though I really do acknowledge this day to myself only each July 14, I once had a half birthday party. And it was perfect. This is what happened:

Just about every year that I was doing my television show, Karen’s Restaurant Revue, one restaurant or another threw me a birthday party in January. Most of them were downright fabulous! Several years back, one was planned at Metro Diner in Culver City, a fun place I had recently reviewed. The owner, Scott, was a fan, and he was wonderful to work with. Not only did he plan on closing down the restaurant for the night so I could have a party, but he printed special party menus for every guest. He even planned the balloons!

The day before the party, I unexpectedly had to rush to New York because my father got really sick. I wound-up staying there for almost two months, during which time we lost him. And then, of course, I stayed for several extra weeks to help my mother adjust to widowhood.

Scott at Metro Diner offered to still throw me the party when I returned to Los Angeles, even though it was already March, but, understandably, my head was not into having a party at that time. Many friends were really sympathetic, with some of them even coming over to give me belated birthday gifts. I could not let their kindnesses go unrewarded, so by the time July rolled around, I decided to take Scott up on his offer, and let him throw me a half birthday party! And, let me tell you, it was even better than the one in January would have been! 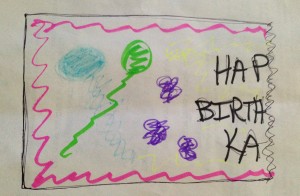 Artist rendering of my half birthday cake. Drawing and photo by Karen Salkin.

The venue and menu were the same, but there were a few little differences to commemorate the actual occasion. First of all, I had a “half birthday” cake. I designed it, and Liz at the Butterfly Bakery executed it. She made a full-size sheet cake, but I told her to not frost one end, and actually make the cake on that side kind-of jagged, as though the cake was ripped in half. Then I had her do the writing towards that end so it read “Hap Birth, Ka,” with all three words written right under each other, and at the very end of the ragged part. That way, it looked like it was only half a cake rather than a full one. So clever, even if I do say so myself.

The cake was really a hit, with just about every single guest looking at it and asking what happened to the other half! That was exactly the reaction I was going for. [Note #1: This was before digital cameras, so I have only old school real in-your-hand photos of the whole shebang. They’re in my house somewhere, so maybe if I start searching for them now, I can show them to you by my next half birthday!]

I also wore the shortest skirt ever, because I was trying to rock “half a skirt.” That worked, as well.

And then, because there were several people I had considered to be my friends who were definitely not there for me when my father died, I pared the guest list down to half of what it had been in January! That was perhaps even more satisfying to me than the cake was! [Note #2: Feel free to copy any of my ideas to throw your own half birthday party. It’s really fun.]

There is nothing like that celebration happening on today‘s half birthday. But, I don’t need a big soiree this year. Yesterday was one year since my horrible painful hands ordeal began, so I’m just grateful that, with all the horrific pain and surgeries that I’ve been through because of that situation, I’m able to be so far along in my recovery. Just using my hands for even the smallest of tasks, and being able to leave the house without assistance, and stuff like that, makes this my happiest half birthday ever.

So, Happy Half Birthday to me! Yay!