Trending
You are at:Home»RECIPES»RECIPE: TOWER OF MATZAHS RECIPE
By Karen Salkin on April 14, 2020 · RECIPES

While Passover is still going on this year, I figure some of you might enjoy my recipe for something fun to do with your leftover matzah, (which you probably bought in bulk before all the sequestering, and now you’re stuck with it since you couldn’t host a seder last week.) And it’s such a good one that next year, you’ll buy extra matzah just to make my Tower of Matzah with! 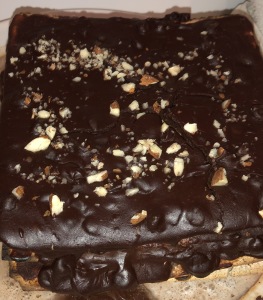 What the finished Tower of Matzahs should look like. Photo by Karen Salkin, as is the one at the top of this page.

First, here’s the background on the whole saga:

Sometime in the past few years, I noticed a recipe someplace for an interesting dessert using matzahs. So I bought a box of whole wheat ones last year, but never got around to making it.

So now, in these times of being stuck in the house, I’m trying to use all the foods I have on hand. I take the order to stay at home very seriously, (as we all should!) After a brief search, I found my box of year-old matzahs, (which were still good, by the way—the flatbreads themselves were still in the plastic covers in the sealed box,) but could not find the recipe.

So, after scouring the internet for a good dessert recipe using matzahs, I put several together myself to come up with this perfect no-bake one. 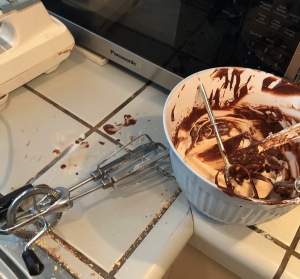 Just a small part of the mess I made while putting together my Tower of Matzahs! And those little bits are chopped almonds pieces, not dirt. Photo by Karen Salkin.

And let me tell you, making it with less-than-perfect ingredients felt like a disaster! My kitchen looked like several chocolate cream puffs had exploded.  But on I plugged, with the opposite of high hopes for it.

I made my Tower of Matzahs on the afternoon of the first night of Passover, for us to try-out after dinner. But the dinner I made was so filling, and surprisingly delish, that when Mr. X said to leave the dessert until the next day, I was more than happy to accommodate him. I did not want a failure after my dinner triumph.

So, it was with the greatest trepidation that I finally brought it out of my auxiliary refrigerator—I didn’t even want to look at it! But I was pleasantly surprised. I thought it looked exactly as it should—slightly crooked and with thick chocolate on top with some of it dripping down the sides. But I was so scared to try it—I had images of Mr. X spitting it into the garbage because of the year-old matzahs and wrong ingredients.

But—drum roll, please—it was absolutely delish!!! And filling! We’ve enjoyed one smallish slice each night since then. And it’s equally delicious every time.

So, without further ado, I’m giving you my recipe, with alternate ingredients at each juncture. It sounds sooo much more complicated than it is, trust me. If I can make it, with my limited ingredients and equipment, anyone can. (A special shout-out to one of my proofreaders, and Master Chef, Patty Rampino Marotta, for all the recipe and ingredient help, and encouragement!)

1/2 cup of chopped almonds (I have a feeling pistachios might be fun, as well.)

FOR THE WHIPPED CREAM (which you should make first, before the ganache, if you’re using just one mixer) 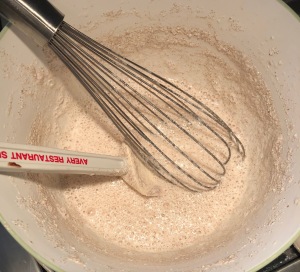 As whipped as the half-and-half got! Photo by Karen Salkin.

*2 cups cold heavy cream  (Do not use half-and-half—it does not whip, no matter what the internet tells you! If that’s all you have, though, mix it with very softened, not hot melted butter, and try to whip it that way. Or mix it with whipped cream from a can and try to whip that mixture. But if you use that canned substance, lessen the sugar—just taste the cream first to determine how sweet it already is.)

1/4 cup powdered sugar. (Or Stevia. You need the consistency of powdered sugar, not granulated in any variety. I didn’t have powdered sugar, so I used Stevia because it’s also powdered, and it still tasted perfect—you would never taste that it’s not sugar.)

1 tsp. vanilla extract (If you’re an almond lover, and have almond extract on hand, that’s okay, too.)

1/2 tsp. ground cinnamon (But not more than that.)

Alternately, mix those last three ingredients into one 8-16 oz. tub of non-dairy whipped topping, and continue from there.

FOR THE CHOCOLATE GANACHE

THE ONLY PARTS YOU HAVE TO ACTUALLY “MAKE” 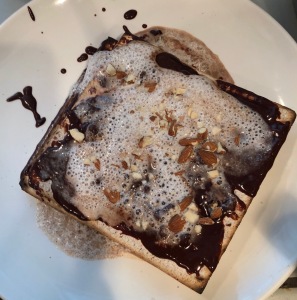 What the top of one round of layers should look like, only with stiffer real whipped cream. (It all worked, even like this, though.) Photo by Karen Salkin.

First make/mix the whipped cream. Put the heavy cream, powdered sugar, vanilla, and cinnamon into a large bowl, and then beat the mixture with a hand mixer until soft peaks form.  [Note: I used half-and-half, so it never got fully whipped. I just used it in the still-liquidy form for its part in the assembly. It looked awful, but still tasted great.]

Then make the chocolate ganache: Place chocolate chips in a large bowl. In a small saucepan over medium heat, bring the heavy cream (or half-and-half) to a simmer, (meaning—don’t let it boil,) and then immediately pour it over the chocolate chips. Let it sit for about ten minutes, then beat with the hand-mixer or just manually whisk it until most of the chocolate chips have melted. (I had some of the chips only half-melted, and they added a great bit of texture to the finished dessert. But if you like your ganache to be smooth, just make sure it is!)

HOW TO PUT IT ALL TOGETHER

Put a drop of the chocolate ganache on a plate or platter big enough to hold the tower flat.

Then place one matzah on top of it. Spread some ganache on top of it, followed by the whipped cream. Then sprinkle some of the chopped almonds over that, making sure to distribute them out to the ends and not solely in the middle.

Then just follow suit with as many matzahs as you’re using for your tower. (I used ten.)

But do not put the whipped cream on the top matzah! Just use up the rest of the ganache and drip it down all the sides. And no worries—it’s supposed to look messy!!! (Because I say so!)

Sprinkle more almonds all over the top, in as artistic a manner as possible, and that is it! 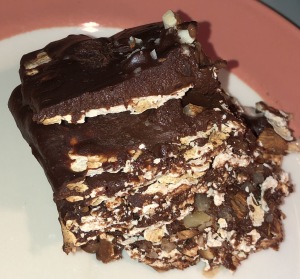 What it should look like when you cut a piece. Sort-of like tiramisu, (but without the coffee I hate!) Photo by Karen Salkin.

Put it in the refrigerator for at least four hours, but even more will be great. The longer, the better. You want to be able to cut it easily with a knife and have the crackers be soft, not at all matzah-like.

If you have extra whipped cream, which has held up, serve it along with the Tower.

*Final note: Out of desperation, I did try to whip half-and-half, to not much avail. It did get a tad aerated, which is good, and I did manage to drizzle it over each layer of ganache. While it didn’t become an actual layer itself, that creamy mixture did add some flavor, necessary moisture, and creaminess to the final product. So just go for it, if it’s really all you have in that category.

And Happy Sweet Treating! (Let me know how it works-out for you in the comments section below.)