Trending
You are at:Home»RECIPES»RECIPE: COTTON CANDY CAKE
By Karen Salkin on January 11, 2019 · RECIPES

Here’s yet another one of my own culinary creations, with no help from the internet, that’s for sure!!! And just in time for my birthday on Monday!

On Thanksgiving this year, Mr. X and I were going to the house of friends who not only own two restaurants, but also a catering company! So, of course, I never make any food to add to the festivities because they have it all pretty well covered.

We usually also go to them for Christmas, so for that occasion, I bring a goodie bag of fun gifts for the guys. But Thanksgiving is a different story. It’s more about the food and giving thanks, rather than giving gifts. So, this year, I really wanted to participate in the actual feast. 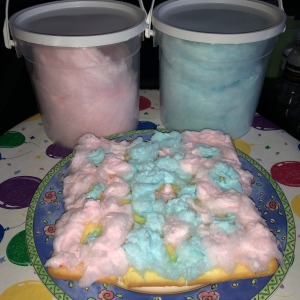 Knowing I could not possibly make any side dishes as good as theirs, I opted to make a dessert. There’s always room on a table for extra sweet treats, in my humble opinion, and I noticed that another guest had done so a time or two before, so I decided to go for it.

The only problem is that I forgot to think of what I was going to make until…after noon the day of! The dinner was called for 6PM (which is way too late for holiday meals, in my experience, but this time it worked in my favor because it gave me time to concoct something.) I knew it had to be special and festive, to fit the occasion. And I didn’t want to make a usual Thanksgiving dessert, like pumpkin or pecan pie, just in case someone else brought one.

And, at that point, I had no time to go shopping, so I had to go with what I had on hand. And, shockingly, I had two giant tubs of none other than…cotton candy! And what is more festive than blue and pink cotton candy??? The answer is…nothing.

Sidebar: Even though I’m not a fan of that basically all-sugar confection, it does hold a special place in my heart. When I was in the circus, after I did my star turn as The Divided Lady in the side show tent each afternoon and evening, I put on a vendor jacket and sold cotton candy in the Big Top!!! (I know—how versatile of me, right?) So even just looking at that pastel fluff brings back fun memories for me.

Now back to the story of this cake, followed by the easiest recipe ever! 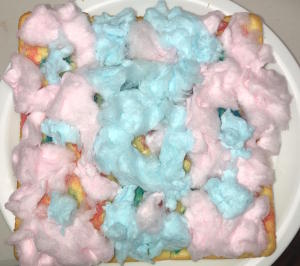 I have to admit that the end result did look like a gender reveal cake for someone who was having boy and girl twins, which is not at all a bad thing—it makes it truly a cake for all seasons. That versatility means that I had to share it at the beginning of this year, (and right before my own January 14th birthday, in case you didn’t get the first paragraph hint,) so you can use it whenever you need to. And whenever you have a plethora of cotton candy on hand!

So, armed with that festively sweet treat, and knowing that I always have boxed cake mixes in my pantry, I sat right down and searched the internet for easy recipes that featured those two ingredients. And, even after an hour and a half of searching, I found…nada. Nothing. Nil. Zilch.

Yes, there were several answers to the many different ways I asked for “easy recipes with boxed white cake and cotton candy,” but they were all very complicated, and most had sooooo many ingredients, some being things even a pastry chef doesn’t have at his or her fingertips!

With the clock ticking, I had to make an executive decision about what to do. And I knew the only solution was to come up with my very own recipe. And you know what? It was a raving success! It was not only delicious, and easy enough, but beautiful, as well. (And we all know that in Los Angeles, what’s on the outside may be even more important than what’s on the inside. Not my philosophy, but just sayin’.)

The dessert table. Okay, let’s be honest–which one looks like the most fun? Karen’s Cotton Candy Cake, of course! Photo by Karen Salkin.

One woman at the fete actually gasped when she laid eyes on it! She thought it looked so professional that she asked Mr. X, “Does Karen make this all the time?” She was shocked when he replied that it was my first time. I’m so happy that I did that little bit of eavesdropping. (And they were still raving about it at the Christmas dinner, over a month later!)

Okay, so here it is–my basic recipe, followed by one alternate way to do it.

Whatever the box calls for—e-words, water, milk, oil, whatever

Bake the cake as directed on the box.

Let it cool completely—and I do mean completely—for at least a half hour. This is the most important part! (I”ll explain in a minute.)

You can “frost” it on either side.

With a butter knife, cut nine little holes (three each in three rows.) Again, make sure the inside of the cake is fully cool, as well.

DON’T DO THIS NEXT PART UNTIL YOU’RE ABOUT TO SERVE IT!!!:

Stuff little pieces of cotton candy into the holes, alternating row colors. Then surround the entire surface of the cake in the alternating color of cotton candy. It will stay there on its own—do not use any “moisture” to “glue” it on!

ALTERNATE WAYS TO DO IT

You can cut it into bars before you attach the cotton candy, if you choose.

Happy Sweetness!!! (And no need to make one for me for my birthday—I can bake this one for myself. But all other efforts will be totally appreciated!)