To counteract all the recent sadness in the world, (especially in the celebrity deaths category—oh my!,) I figured I’d brighten the mood a little with this recipe I came up with in the last month; it’s a delightful bit-out-of-the-norm brunch treat. I thought of saving it for the next National French Toast Day, but that’s not until November, and I didn’t want you to have to wait that long to try it. Plus, I figured that you might still have some leftover eggnog that you’re wondering what to do with, (that stuff is good for a loooong time!,) or that you may be able to find it on sale at this time of year. 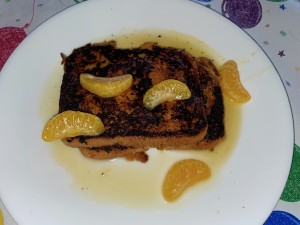 The basic finished dish, before I adorned it with whipped cream and rainbow sprinkles. Photo by Karen Salkin.

Even Mr. X loved this dish! He said it was beyond restaurant quality–he deemed it to be as excellent as the fare at our absolute favorite breakfast place of all time! I cannot tell you what a compliment to this recipe that is.

And it’s quick and easy, to boot. The only slightly time-consuming activity is waiting for the actual French toast to brown on both sides, so it’s a tad difficult to make several servings at one time, (unless you have a giant griddle, of course.)

The full recipe is not one I’ve seen anywhere else; I had to just basically brainstorm it. Here’s the background of why I chose to do this recipe now: I wanted to buy eggnog for the recent holidays, but I knew that Mr. X and I just take a couple of sips, leaving most of it to go to waste. I had already experimented with Eggnog French Toast years ago, so I figured this was the time to perfect it, (which I did.) Using eggnog eliminates all the mixing together of the liquid that you dip the bread in, therefore making this a super easy dish. 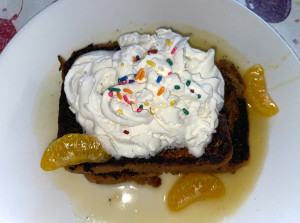 The delicious completed Artisan French Toast with Orange Syrup. Photo by Karen Salkin, as is the one at the top of the page.

But then I had to figure-out exactly what kind of bread to use, and I knew that I wanted to top it with something special, (even though Eggnog French Toast is special enough on its own.) At the same time, I had been trying to figure-out what to do with all the little oranges that Mr. X and I keep buying and wasting. So I did a lot of research on how to make them into some form of topping that would go with the bready dish, and combined a few into one perfect one. And voila—here we are! So let’s get to it already.

FRENCH TOAST ITSELF (It’s only two ingredients!!! How easy is that???) 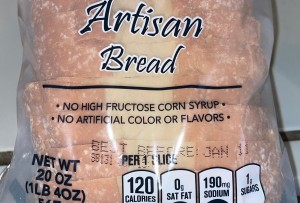 I chose artisan bread, (which is kind of a light beige thick bread,) because I like thicker bread for my French toast; I eschew sogginess. But you can use any bread; some might change the flavor a bit, but I’m sure it’s all good.

One container of eggnog, even the “lite” variety, new or leftover

3/4 cup granulated sugar (I think Stevia or the like will be fine, as well.)

2 tablespoons butter or margarine (I think unsalted might be best, but it’s such a small amount that it really doesn’t matter. I used salted margarine, and the recipe was perfection.)

Several mid-size oranges; the number depends on how many slices you’re making, how big the oranges are, and how much you love oranges! (And how many you want to use up!) For ten slices, which is five servings, I used four clementines. But I could have gone with even more because we love them!!!

Before anything else, peel your oranges, separate the segments, and remove as much pith (the white stringy stuff) as possible from the pieces.

Then make your syrup, and let it just simmer while you start the French toast. 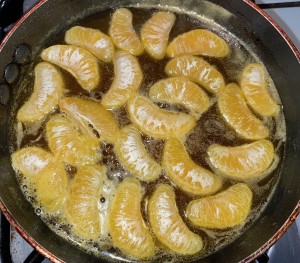 Mix the sugar and orange juice a bit in a medium frying or sauté pan over high heat for about two minutes, until it combined well, but don’t really stir it, except a bit at the start.

Then mix in the butter and vanilla extract until the butter is melted.

Stir in the oranges, and…that is it!

Let the mixture simmer on low heat while you ready the toast. If it starts bubbling, just turn it off, but leave it on the burner—it’s hot enough at that point. 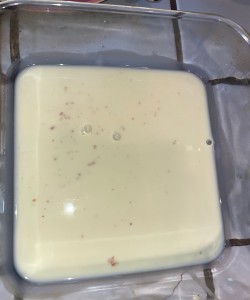 Pour some eggnog into a flat dish, big enough on the bottom to accommodate one slice of bread. The amount of liquid depends on how many slices of toast you’re cooking. Remember—you can always add more nog if needed.

Then toast your bread. Do not skip this step! It’s my little invention to make super-sure it does not come out soggy in the end.

Then gently dip it into the eggnog for just a few seconds, covering both sides and using a spoon to make sure the sides of the crust are covered, as well. But do not let it linger in there!

Quickly put it in a hot frying pan or on a griddle, which has been oil-sprayed and already on medium heat. I used a pan that accommodated two slices at once, so I could serve them together. Make sure to brown both sides well, with several turns if necessary. 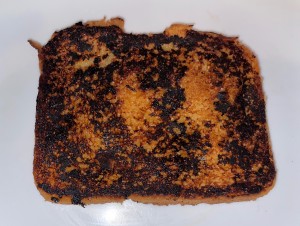 How crispy I make the individual pieces of French toast. Photo by Karen Salkin.

Put two slices on a plate, spoon the syrup over them, remembering to include lots of oranges, and serve.

I topped it all with store-bought whipped cream, and to make it that much more fun, I topped that with rainbow sprinkles, which always enlivens everything!

[Note: Yes, for those of you who noticed and are shocked, I did write the real word instead of my usual “e-word.” It actually did make me a bit sick each time, but since it was just part of the word, as the beginning of “nog,” it was a tad easier for me. But I had to make the sacrifice so you would know what I’m talking about!!!]