I was shocked to learn, this past Friday, that lovely Kris Nelson, Rick Nelson’s ex-wife, had died a few weeks ago. I had met her only once in my life, very many years ago, but she made such an impression on me that I feel awful about her passing.

I had actually just alluded to our meeting in an article I recently wrote in this e-zine, so Kris is especially fresh in my mind. 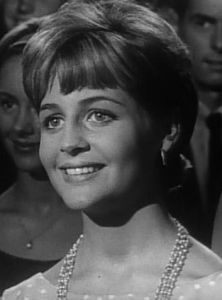 Kris Nelson in her early days. Such an angelic face.

When I was doing my TV show, Karen’s Restaurant Revue, I was called-in on a commercial audition, about which all I knew was that they were looking for “funny.” When I got there, I discovered that I was the only girl! All the rest were male comedians! I assumed that my agent had gotten the call wrong, but when I went into the room, I was greeted by the prettiest casting director ever. She looked better than the females I had gone out against when my former agent had me still in the model category! And there was an angelic-ness radiating from her, as well. She was, of course, Kristin Nelson.

I asked if there had been some mistake about my being there. And she said that no—she had called me in on purpose. She said that the client needed a funny guy for their commercial, but when she was deciding which male comedians to bring in, she thought of me! She told me that she was a big fan of my show, and that she thought I was funnier than the guys, so she wanted to give her client the option. We discussed that we both knew that I wouldn’t get the job over a guy, but she thought it was worth a shot.

I’ve never forgotten that kindness from her. I can’t tell you how rare that is in the business. There was absolutely nothing in it for her. And she was taking a big risk in her own career by suggesting something other than what the client specifically requested—a funny guy, not girl. 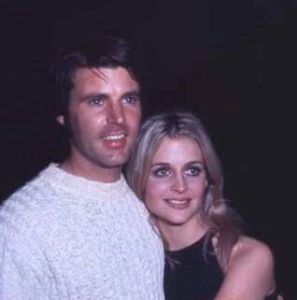 Rick and Kris Nelson. What a gorgeous couple they were!

She didn’t mention to me that she herself was famous, much moreso than I. So when it hit me later that she was Kris Nelson, formerly of the show The Adventures of Ozzie and Harriet, (because she was married to their son, Rick Nelson,) it struck me as odd that we were on opposite sides of the camera at that point in our lives. (She was also an accomplished artist. Her paintings are gorgeous. Even Jacqueline Kennedy was one of her many fans!)

She also didn’t state that her daughter was Tracy Nelson, a television series regular at the time. In our repartee, she just mentioned “my daughter,” in reference to a health situation. It was all very un-Hollywood. And sweet.

With Mother’s Day being just yesterday, my heart especially goes out to her children and grandchildren.

RIP, Kris Nelson. And thank you for being kind to me.