Even though Ed Asner was ninety-one, I was still shocked by his death last week. That’s because that very morning I had read a recent interview he had done with The Hollywood Reporter that was published just three days prior! 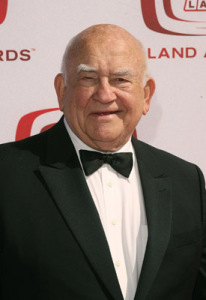 The interview was in one of the way-too-many newsletters that pop-up in my inbox, unsolicited, on Sunday morning, August 29. When I saw his name in the title, I got fearful, assuming something bad had happened, so I was relieved when I saw the first words, “Ed Asner is 91 but still as crotchety and lovable as he was playing Lou Grant.”  My mind went, “Whew.” (I was so relieved that I didn’t even let the grammatical and syntax errors in that one sentence bother me as much as they usually would have.)

And then a mere two hours later, I read the news that he had died the very morning that the article had come to me. I assumed it was one of those rotten celebrity hoaxes, but, alas, it was not.

From what I read, Ed had seemed his usual “spunky”* self in that interview, which had been conducted just two weeks before he left this level of life. That makes his passing even sadder. *[“Spunky” is a reference to the most famous line Ed Asner ever uttered on TV. It’s probably the most famous sitcom line ever! Look it up if you’re one of the few who’s not familiar with it.] 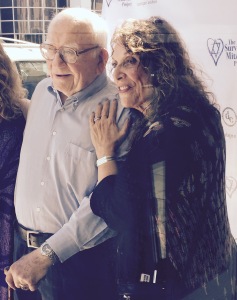 Surprisingly, I had met Ed just once. I deem that lack to be surprising because I knew several other members of the MTM television family much more than that. Valerie Harper and I had a mutual admiration society; there were several months back in the day when Julie Kavner and I were in the same orbit; Ray Buktenica is my favorite person on earth; I adored late producer Allan Burns, with whom I shared many a laugh; and Gavin MacLeod still holds the record for giving me my favorite compliment ever, when he used to watch my show.

But the one time I did meet Ed Asner has always amused me. It took place almost five years ago at Zane Buzby’s A Star Shines For Survivors event. It was part of The Survivor Mitzvah Project, which is a non-profit that provides direct emergency aid to elderly and impoverished survivors of the Holocaust, a cause that was near and dear to philanthropic Ed’s heart; he even served on the Entertainment Board of Directors for that organization.

The afternoon fete was an intimate yet crowded affair in a boutique jewelry store in Beverly Hills. For some reason, Ed started up a brief convo with me, asking me a lot of questions in his usual semi-curmudgeonly fashion. I loved every minute of it. 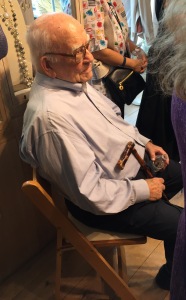 Ed Asner at the A Star Shines For Survivors event, holding the cane he tapped me with! Photo by Karen Salkin.

And then it was time for Zane to address the assemblage. I was happy to see that absolutely everyone quieted down for her brief speech. We were all standing, except for Mr. Asner. He and I had just finished chatting, so I stood-up sort-of in front of him, while making sure to stand to the side, so as to not block him.

All of a sudden, I felt a few hard taps on my rear end, and I turned around to see who was doing that to me. It was none other than Ed Asner, hitting me with his cane! He wanted to get my attention to ask (and I use that word lightly) me to tell other people to get out of his way! I wrote at the time that I was “honored that he hit me on the butt with his cane,” and I feel that way even more now. How many people have that fun memory with a TV icon?!

Ed Asner meant a lot to many over his long life, including all of our fellow Screen Actors Guild members; he was our President for two terms, from 1981-1984. My heart goes out to all of his friends, colleagues, and fans, but mostly to his children. I wish them peace now and great memories always.