Over the last few years, I’ve been lucky enough to be invited to many events put on by Tourism Ireland. But their luncheon last week was the best one ever.

It was held at the California Club, which is a private club downtown that I had never even heard of! Truth be told, I don’t even really know what a private club is, but this one is a gorgeous, classy place that dates back to the 1800s. For those of you reading this on the East Coast, it reminded me of the New York Athletic Club on Central Park South. 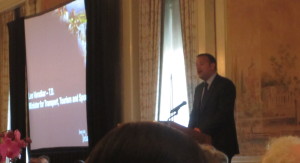 The occasion of this fete was to meet Leo Varadkar, the Minister of Tourism, Transport, and Sport for Ireland, and hear about the latest developments in those areas for this small country. To that end, there were a few small speeches and video presentations, but mainly we mingled and ate.

And many of us admired each other’s greenery. Not garden greenery; it was in our attire, and wearing something green let us all know just who was fun/respectful enough to dress in Irish colors. I really did think I would be the only one, but I was happy to see that about a quarter of the assemblage was into it, too. If there had been a prize for wardrobe, though, I believe I would have been at victor because I’m sure I was the only one there wearing shamrock earrings, (which, shockingly, I had no trouble finding among my thousand pieces of jewelry!,) and even better—my recently-surgeried left hand was covered in a bright green bandage! (I told you I would have won!) 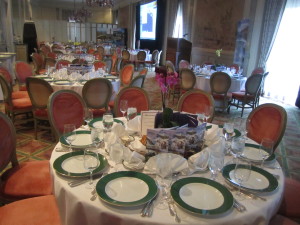 The lovely dining room in which the luncheon took place at the California Club. Photo by Karen Salkin.

Now to the fare. As opposed to Tourism Ireland’s usual buffets, this meal was sit-down and served by an attentive staff. We began with a stacked caprese salad, which was mozzarella and tomatoes on butter lettuce with a basil vinaigrette, and if my table of ten was any indication, it was enjoyed by all.

The main dish for most everyone was grilled salmon with garlic potatoes, and an apropos-of-the-occasion green watercress sauce. My guest, Flo, said it was all “delicious, very light and tasty, and attractively presented.” 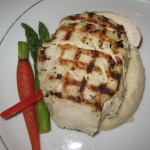 The chicken dish. I wish I had thought to snap a picture of the salmon with the green sauce, which was gorgeous. Photo by Karen Salkin.

I have to laud the powers-that-be over there for accommodating the few of us culinary pains. I don’t eat fish, so they were kind enough to serve me a melt-in-your-mouth chicken breast with potatoes and vegetables instead of the salmon. But as I went around the room to greet the many people I knew, I noticed that some of them were dining on what looked to be a pasta situation, (I’m assuming they were vegetarians,) and there were even some vegan platters. And everyone seemed happy with his or her own choice.

The dessert was a quite surprising trifle made with chocolate cake and Bailey’s Irish Cream. How perfect for the occasion! As many of you know, I hate the taste of alcohol, but this I loved. I even thought of having a second one, saying it was for the one person who had left our table early, but something about the event made even me be classy enough not to go for it. 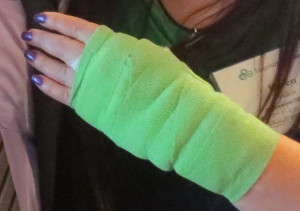 The only picture of my green bandage, that I had done on purpose for the occasion. Photo by Flo Selfman.

I ended the afternoon by being introduced to the Consul General of Ireland, Finbar Hill, (who has just about the greatest name ever!) He’s a lovely, aware gent, who even complimented me on my appropriate green eyeshadow! OMG! Not one other person even noticed it. I actually even forgot that I had done that, in honor of the event. So, yeah, I definitely would’ve won the Tribute-to-Ireland prize, had there been one. Maybe that’s something they should implement into their event next year because I’m ready. And the prize should be a trip to the Emerald Isles! I’m going to start practicing my Irish stepdancing right now.