Trending
You are at:Home»ART»PARTY/ART: PARTY FOR THE OPENING OF THE BATMAN EXHIBIT AT THE HOLLYWOOD MUSEUM
By Karen Salkin on January 18, 2018 · ART, PARTIES

Back in the day, I did a special series on the Travel Channel about interesting places in Hollywood.  As a make-up junkie, my favorite was the Max Factor building, of course.  So I always love going back there for events.  It’s now called the Hollywood Museum, with the ground floor intact as make-up rooms, but with ever-changing exhibits on the two floors above. 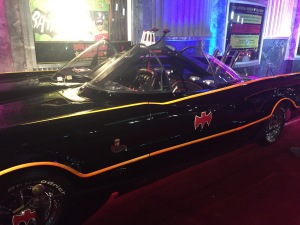 The orininal Batmobile. Photo by Karen Salkin, as is the big one at the top of the page.

And right now they’re featuring the Batman television show exhibit, (entitled Holy Hollywood History! A Batman ‘66 Retrospective,) whose opening party I went to last week.  It was fabulous; I only wish that Adam West was still alive to see this.  He and I shared a wonderful agent for many years, (until a talent coordinator made me leave my beloved agent because she told me that “all his other clients are old men,” a decision I’ve always regretted,) and I always heard lovely stories about Adam from him.

As we arrived at the fete, the original Batmobile was on full display on the sidewalk, creating a crowd of admiring passers-by.  I’ve seen it in person before, but it’s always entertaining.  And I was thrilled for all the fans who had this wonderful opportunity. 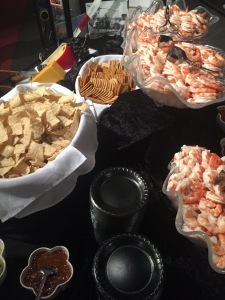 On the first floor was a bar and a table of cheese and crackers and fruit. What a perfect way to begin the celebration!

Part of the fun of the Hollywood Museum is taking the humongous elevator (which is reminiscent of Disneyland’s Haunted Mansion) up to the second floor for the exhibits.  Inside the lift were fabulous old movie posters, and for this occasion, some Batman visuals.  And on the sort-of lengthy (for an elevator ride) ride up to the top, the famous Batman TV theme music played, which got us all in the mood for what we were about to see. 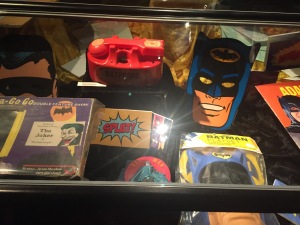 There were very many artifacts from that now-cult-status TV show.  I cannot even imagine from whence it all came! It dates back over half a century, for goodness sake!  We saw the Batphone, along with various costumes and memorabilia. And there were also photo exhibits, reminding us of the many actors who appeared on the show, and what characters they played.

And along the way was a trio of food areas, one featuring shrimp cocktail and guacamole, one serving hot tidbits, and the most important one, of course—desserts, along with another bar. We were well taken care of in the refreshment department! 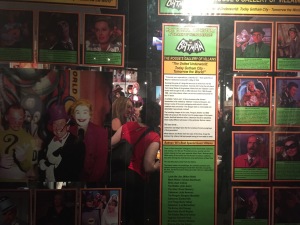 Once satiated, my friend and I really enjoyed perusing the giant display cases. The memorabilia was fascinating! I’ve only seen a few episodes of the TV series over the years, so I was not familiar with most of the items, but I still loved them. And, as a trivia fan, I knew who a lot of the actors from the iconic show are. I even worked with Frank Gorshin (aka “The Riddler”) on a television show when I was first starting-out in the biz! I was so excited that my name was up front in the credits the same size as his! (And Frank and Mr. X shared voiceover duties as the voice of Dr. Strange on the Batman animated series! And Mr. X also starred in the TV movie Return to the Batcave, so our connections to this exhibit abound, as you’ll see as you continue reading.) 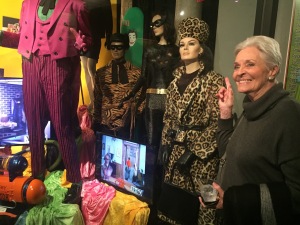 Lee Meriwether on the right, next to her own likeness. Photo by Karen Salkin.

A point of interest for the original costume section of this exhibit is one worn by movie star Ida Lupino when she played Dr. Cassandra on the show. Her wardrobe has never before been seen by the public, so that’s pretty special. I was friendly with Ida when I first came to LA as a teen-ager, (I know—strange duo, right?,) but I never even knew that she had done this TV show! So I really enjoyed learning about that.

The most heartwarming part of the evening was seeing still-gorgeous former Miss America, Lee Meriwether, who played Catwoman in the movie off-shoot of the Batman series, standing next to the life-size rendition of her character in the Gallery of Guest Villains! I’ve seen her around town many times over the years because she’s a member of a theatre company I often review, and I’ve even met her on occasion, but I so did not want to take even one second of her time away from her adoring fans that night, so I left chitchatting with her for another time. 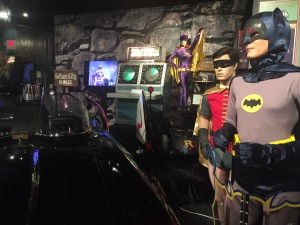 Speaking of someone I’ve run into before, Burt Ward, (the only Robin to soooo many Batman fans,) was in all his glory that night. I also didn’t get to talk to him at this soiree, but I had met him at an event a few years ago because he owns Gentle Giants Dog Food, a non-profit organization that helps feed dogs, which you know I’m all for. So big props to him for that.

You can see the Batman exhibit, (which opened on January 12, the same date that the campy TV show had its television premiere way back in 1966!,) for yourself because it runs until the end of April. So, everybody—to the Batcave!