Trending
You are at:Home»ART»PARTY/ART: 30 YEARS OF MAKE-UP, MONSTERS, AND MAGIC OPENING RECEPTION
By Karen Salkin on October 5, 2018 · ART, PARTIES

30 YEARS OF MAKE-UP, MONSTERS, AND MAGIC 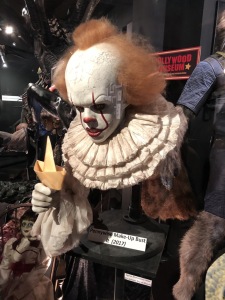 Pennywise from “It.” Photo by Karen Salkin, as is the big one at the top of this page.

I’m always invited to so many more Halloween events in NY than I am here in too-cool-for-school LA, so I was sad that I had to cancel my trip to the East Coast this month.  That is, until I was invited to the VIP Opening Night reception for this fun Hollywood Museum exhibit!

It actually has nothing to with that holiday, per se, but the “monster make-up” aspect made it the perfect kick-off to Halloween month, (which seems to be how I always refer to October these days.)

I have a soft spot for the Hollywood Museum, because, when it was known as the Max Factor Museum, it was the site of my very first segment for a show I used to host for the Travel Channel.  So, just walking into that iconic building brings back wonderful memories for me. 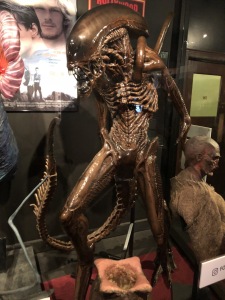 The Alien. Photo by Karen Salkin.

In addition to that edifice giving me the warm and fuzzies over that part of my kooky show business career, I’m also obsessed with make-up, so this event was right up my alley.

Even though I did get to see some of the very old school Max Factor make-up displays on the first floor, the exhibit we were celebrating that night is basically monster make-up.  Since I eschew horror films, I was pretty much at a loss to understand what was going on all night, but everyone seemed to be having a great time.  And my friend, Roz, pointed-out the creepy clown from It, something from Jurassic World, and the Alien aliens.  So those were interesting. 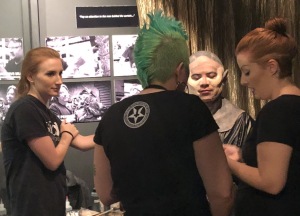 The making of a monster mask. At the top of this page is the sculptor at work. Photo by Karen Salkin.

Also interesting was seeing Batman actress Lee Meriwether there because just two days before, I saw her onscreen alongside…moi!  She and I had just done the same cameo in a new web series. We filmed on different days, so I didn’t know she was in it until the cast and crew screening a couple of days before this exhibit opening. It was fun to see her in person so soon after that. What a still-gorgeous woman she is!

There were make-up artists on-site demonstrating their skills on live models, and one real artist was sculpting a mask (or somehting similar) right in front of us! (I would have loved to see the final result of them all, but I’m terrified of crowds, so I had the leave early. ) 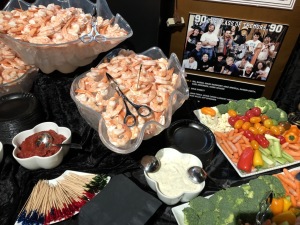 As always with the opening night soirees at this venue, they started feeding us right after we walked in.  There was a bar on the first floor, along with a cheese-and-veggie platter table.  Then there was another bar on the massive elevator up to the exhibit floor, where there was yet a third bar! And there were food stations all over: a shrimp cocktail table, a full hot buffet, and a section for desserts.

For the rest of you, you may not get feted when you visit this monster makeup exhibit, but you will be treated to many fascinating movie magic tidbits.