Trending
You are at:Home»PARTIES»PARTY: “WINNERS” PHOTO EXHIBIT AND SOIREE
By Karen Salkin on February 20, 2017 · PARTIES

There are so many parties and events around town on Grammys Week, and, I, being just one girl, cannot attend them all. (But I do try!) So I was pleased that I made the correct choice to make time for Winners, which was a really fun, unique fete. It’s a photo exhibit which celebrates many of the artists who have won, or been nominated for, a Grammy or an Oscar. (Or, in the cases of artists like Frank Sinatra and Diana Ross–both!!!) 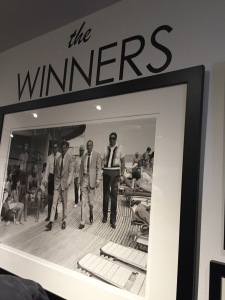 Part of the “Winners” exhibit. Can you pick-out Frank Sinatra in that photo? Photo by Karen Salkin. (THIS one, not the one in the frame.)

It was exciting from the very start. First of all, it was held in the Sunset Marquis Hotel, which has always been famous for having lots of music biz denizens. I’ve long been a fan of that place.

As soon as we walked in, I could see the hubbub in the Morrison Hotel Gallery, our host for the evening, on the right, off the happening lobby. The photos in there were absolutely fascinating! Among them were images of Grammy winners Miles Davis and Joni Mitchell, and Oscar winners Marlon Brando, Woody Allen, Kirk Douglas, (in his underwear, in his youth, thank goodness,) and, my favorite one, Heath Ledger. The photos were shot by Herman Leonard, Henry Diltz, Barry Feinstein, Milton Greene, Danny Clinch, and Timothy White, who I’m told are all legendary in photography circles, (and that showed!) 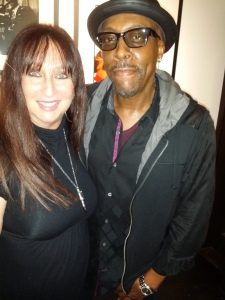 My favorite part of the event happened as I walked in—I bumped into my old pal, Arsenio Hall! We go waaay back, but we haven’t seen each other in many years. The look on his face when he turned around and saw me was priceless, one that I’ll remember forever. He just grabbed me and hugged me for a long time, and then we stood there holding hands for awhile, while we talked about how happy we were to see each other. Then he introduced me to his teen-age son, who’s a beauty. Darling young man. (And this is how in-tune Arsenio and I still are after all these years: when I tossed my hair in-between photog snaps, he admiringly told me, “Good hair toss!” No one has ever complimented me on my hair toss before!!!) 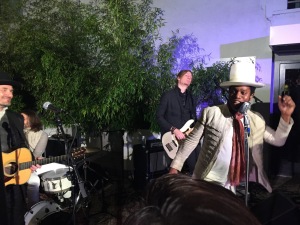 Ty Taylor, (in the white hat,) and the rest of Vintage Trouble. Photo by Karen Salkin, as is the one at the top of the page.

Then we both had others to meet and greet, so the lovefest had to be put on hold. But the rest of the fete was fabulous, as well.

My pal, Alice, and I moved out to the pool area, where the body of the soiree was held. With so many guests, the food ran out pretty quickly, so I can’t tell you about that part, but, even though we were famished, we were happy to stay awhile and enjoy the live music, which reminded me of the parties I went to at this hotel in the heyday of the music scene. 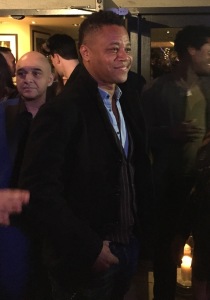 The music was provided by the wonderful rhythm and blues group, Vintage Trouble. The lead singer, Ty Taylor was absolutely brilliant, and charming, to boot. When weirdo celeb-wannabe, Bai Ling, tried to horn in on their act, by sidling over to Ty and basically using him as a pole to dance on, he went along with it for a brief second, (cutely saying, “Okay, so this is happening,”) and then gently led her back to the crowd. Perfect!

As we were leaving the pool to go back to the gallery, Oscar winner Cuba Gooding, Jr. arrived to that area, and pleasantly posed for pictures with everyone who asked. Surprisingly, I had never run into him before, and was happy to see that he looks exactly as he does on the screen, (which trust me, is far from the case with every Hollywood type!) 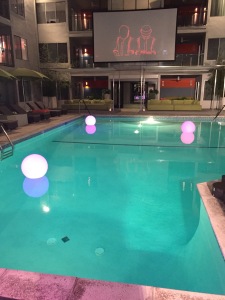 I heard that Julian Lennon, who was the celebrity host for the soiree, was in attendance, as well, but, sadly for me, I never saw him there. I think that he was just laying back and enjoying the festivities, rather than running around greeting the guests, so, good for him.

I’m so happy that we took the time to go back and really peruse the pix in the gallery because they are quite the sight. Angelenos will have this rare opportunity, as well, because the exhibit will be open to the public until February 28th, right after the Oscars. I suggest that if you’re in town then, you don’t miss it!