Trending
You are at:Home»PARTIES»PARTY: SLEIGH ALL DAY HOLIDAY CELEBRATION
By Karen Salkin on December 10, 2018 · PARTIES

I tend to get really lazy in the rain, and just want to stay cozy in my house. That’s what almost happened last week, when I was due at the JHRTS Holiday Party at Boulevard 3 in Hollywood. But I forced myself to go because I didn’t want to disappoint the people who were expecting me. And I’m so glad I did because it was phenomenal!!! 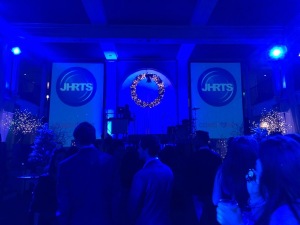 The JHRTS is the Junior division of the Hollywood Radio and Television Society. You would think that in all my years of doing television and radio I would have heard of this organization before, but it was all new to me. (Maybe I was just too young before, and had to wait for them to begin this division for young entertainment professionals! Yeah, I’m sure that’s it.)

But let me tell you—the people in charge of this group should be party planners (as opposed to agents and managers and the like) because this fete had it all!

Most importantly, it was some of the happiest mingling I’ve ever been a part of! Everyone seemed to get along great, with not much of the posturing I see at other “Young Hollywood” events. (More on the guests in a bit.) 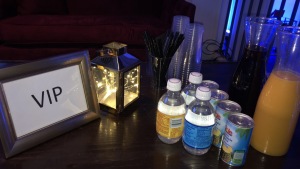 My table set-up in the VIP area. (The ice bucket arrived later.) Photo by Karen Salkin.

Next, the food and drinks were among the most generous I’ve ever seen at any soiree anywhere. (And that’s really saying something, coming from this party-is-my-middle-name bon vivette!) Not only was it an open bar all night, but in the VIP area, where I was (of course,) each table had a set-up with juices and mixers to make your own drinks.

But, of course, I cared about only the food. The passed hors d’oeuvres were creative and out of this world. My favorite server was adorable Des Epps, and I thank him so much for keeping me happy with my favorite tidbit, avocado rolls! Oh my goodness, were those delish! Some of the best of the rest were fabu crunchy shrimp and spicy potato samosas, the latter of which made my veg pal happy. 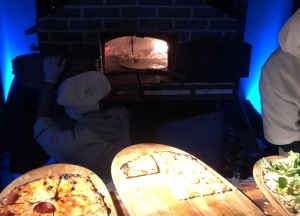 One of the pizza ovens with two chefs. Photo by Karen Salkin.

In addition to those appetizers, there was thin-crust pizza going all night. Two pizza ovens, with four chefs, were set-up on the patio, which is the first thing we saw as we entered the venue. You could either pick-up your thin slices right there, in a wonderful assortment of flavors, or get them from a dedicated buffet inside.

On top of that, there was a burger and French fry bar! I don’t know exactly what they were serving there because the line was so long that I couldn’t get close to it, but the rest of the guests looked happy. 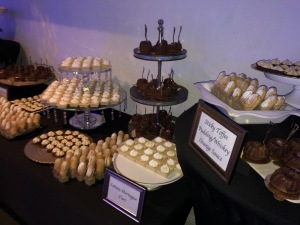 There were no worries for me missing out on the burgers because the best part was inside—the dessert bar! All of those sweet treats were made by pastry chef Chris Tucker, who’s competing on this season’s televised The Great American Baking Show: Holiday Edition, which started airing the night after I met him. I guess we all know for whom I’ll be rooting, especially if he serves more of his whipped peanut butter cups that he did at this soiree! (I found-out on the show that Chris is also a hairdresser, so when I met him that night, we really should have discussed what to do with my ten thousand pounds of tresses, in addition to how fabulous all his cake creations are!!!) 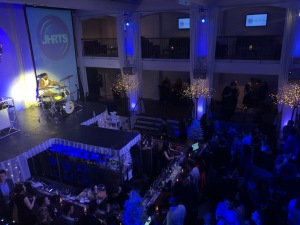 Jaron Takach playing in the spotlight, on the left. Photo by Karen Salkin.

They also did something very creative with the music for the evening, which I’ve seen elsewhere before, but not often enough. While an excellent DJ spun great tunes, wonderful drummer Jaron Takach played along. Not only was he great to listen to, but he had a whole bag of visual tricks to go along with the beats.

I was happy to hang-out with up-and-coming singer, Roger Neal Jr., because he was the only one in the whole club who was bopping along to the music with me! I’ve known him very slightly for a few years now, and he’s adorable. So I’m very happy for his recent success. [Note: This always gets to me—no matter what kind of concert I’m at, hip-hop, classical, whatever, I rarely see anyone beside myself bopping to the music, which is shocking to me. How can people not feel it?!] 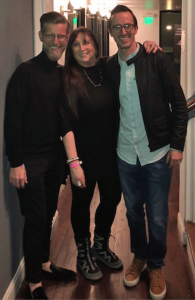 One of my favorite things about Sleigh All Day was the surprise of all surprises—this is a great group of twenty-and-thirty-somethings!!! There were a few hundred of them, and not one King Obo in the group. (“King Obo” is how my funniest friend Alan referred to our most obnoxious pal in high school.)

I usually don’t think of people as young or old, and I get a tad insulted when others make comments about the youth of many of my friends.  One of my grown-up pals once referred to my main body of friends as “children!” That’s so insulting. But, since “Junior” is right in the title of this group, I looked around and noticed that that’s what most of the guests were. And it was really the nicest assemblage of people in that category I’ve ever been around. Big props to all of them! 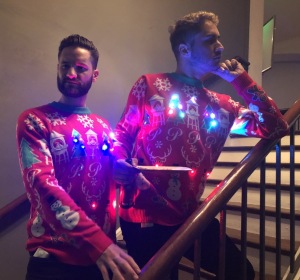 My favorite ensembles of the evening! Photo by Karen Salkin.

The entire crowd was upbeat, well-dressed (in all different styles,) and appeared to be happy, both with themselves and others. It was all great.

Actually, the whole event reminded me so much of my club days a few years ago, only with tons more, and better, food, and not as good-looking (but way more successful) guys. (But the food is much more important than the attractiveness of the males to me now, of course! And the gorgeousness of my guys was hard to beat, so this is no slam on the new crop!)

If all of JHRTS’ events are this wonderful, I may just have to get a new ID, and join them!