Trending
You are at:Home»PARTIES»PARTY: ROOFTOP MOVIES AT THE MONTALBÁN 2019 KICK-OFF PARTY
By Karen Salkin on April 17, 2019 · PARTIES 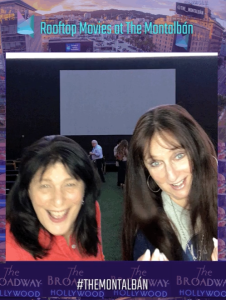 A “still” of a GIF, featuring Karen Salkin on the left. (Her friend was moving more!)

Major kudos go to the powers-that-be at the Montalban Theatre in Hollywood for throwing just about the perfect pre-summer soiree recently!!!

The occasion of this fete was to kick-off the new season (which runs all the way to Halloween) of the outdoor movies series on their fabulous rooftop. The weather was beautiful, there didn’t appear to any crashers this time, (there were a ton last year!,) and it was all very festive.

The party featured hip not-too-loud clubby music all night, plenty of upbeat mingling, a colorful atmosphere, and a GIF booth, which I love keeping my eye on to see just which guests actually know enough to move while taking the image. (They’re GIFs, people—not still pix!) 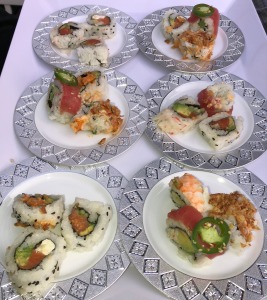 The sushi. Photo by Karen Salkin, as is the big one at the top of this page.

And, of course, the best part was—that there was sooo much food!  You know I love a shindig that feeds us!  And this one covered all the bases.

First up were passed plates of three types of sushi.  The servers were even kind enough to give me just vegetarian ones because I don’t eat fish.  And even if I did, raw fish would definitely not be up my alley!

Then all the guests got to order dinner from the snack bar, with…no limitations on our choices!  How generous was that???  I hope that everyone was polite enough to choose just one sandwich, (either a burger, veggie burger, or crispy chicken,) but we could get both kinds of fries, and even a little salad!  My friend and I shared the sides, and it was all delish! 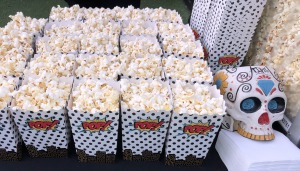 And all the while, fresh popcorn was being served all night.  (But the Montalban really needs to look into switching brands; the one they have now is—how shall I put it?—less than stellar.)  There was also a station where they were doling-out little cups of a frozen vegan treat.  (I refuse to call it “ice cream,” as vegans are wont to do, because if they loathe our dairy products so much, they should not be allowed to use our descriptions, such as “cream!”)  But everyone seemed happy to have a little bit of cold sweetness for dessert. 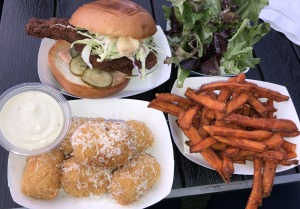 When all that was done, and people were starting to take their seats (on comfy lounge chairs) for the first movie of the year, a girl began going around with a tray full of little goodie bags for the assemblage.  Can you guess what was in them?  A bunch of snacks for the movie!  How adorable!  And thoughtful!  Each bag had different contents including a variety of bagged chips, chocolate bars, and fruit snacks.

Kind personnel gets to my heart even more than food does, and this celebration was filled with those peeps.  Most notable among them were Martin, the adorable and pleasant guy who took our dinner order, and Greg, the bartender who didn’t wait for me to find my drink ticket when I was choking a bit, (which trust me—many barkeeps in LA would have done!) 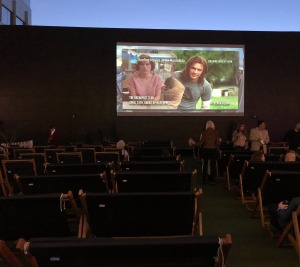 The screen on the Montalban Rooftop. Photo by Karen Salkin.

And I finally got to meet the President of The Montalban Company, Gilbert Smith, who also has the distinction of being the son-of-law of Ricardo Montalban himself, for whom this theatre is named.  I had met Ricardo when I first started-out in show biz, so I loved having it confirmed for me that he was as lovely a man as I had experienced.

As I said, this party was just perfect!

And the festivities continued with the first film of the season up there.  The uber-scary Get Out screened once the sun set; the Montalban provides not only the headsets but also cozy blankets for all who would like one.  I just hope that everyone came with someone whose arm they were comfortable grabbing—this movie gets terrifying!

For more info on the summer film series, and all the goings-on at this esteemed theatre, just click here:  www.themontalban.com