Trending
You are at:Home»PARTIES»PARTY: “PIZZA WITH WRITERS” LAUNCH PARTY
By Karen Salkin on October 26, 2015 · PARTIES

I went to an interesting party recently; it was a hybrid business fete/house soiree, so it was a comfortable one.  Former TV writer Jon Hotchkiss was launching his web show, Pizza With Writers, and to that end, that’s who was there, and what was served!  Clever. 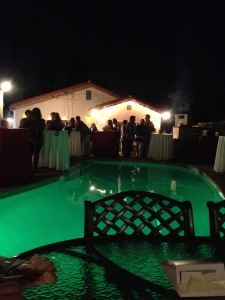 It reminded me of the limo pizza party I once threw Mr. X.  [Note: Story of that fiasco at the end of this column, if you’re curious about it.]  Had I known Jon back then, we all could have just tipped over to his house, and called it a night!

When I heard that Jon’s show was called Pizza With Writers, I couldn’t imagine why he chose those two things. Then I found-out that he was a writer, and when I went to his house, I saw his pro pizza oven that he designed and had built in his massive backyard. So, it turns-out, he just worked with what he is professionally, and what he has on-hand at his abode. Smart. If that formula is successful, I should produce my own show called Clutter with Comedians. Instead of my fellow funny peeps coming over and eating pizza, they can come over and clean-out my prized possessions! I like it! 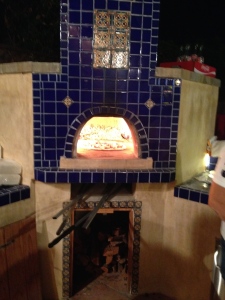 He had professional pizza makers from Mulberry Street keep the pizzas coming for the duration, and they were all really good.  It was fun to be eating freshly-made pies in someone’s backyard!  I think even the hermit-esque Mr. X enjoyed himself.

And this was impressive–Jon made the pizza sauce, marinated the veggies, and grilled the sausages all himself. When does he find time to write??? Or do a podcast?

People at the launch party kept asking Mr. X and me which one of us was the writer. I couldn’t imagine why they knew that one of us was! Then I realized—it was all writers! And pizza! Just as the invitation stated. I love an invite that lets you know exactly what to expect.

Jon Hotchkiss talking to his guests. Photo by Todd Felderstein.

This whole shebang brought me back to the early days of my own local TV show, Karen’s Restaurant Revue, because, as Jon is now, I was a pioneer then; there had been a few shows on that cable channel before mine, but none had ever been successful.  Mr. X basically forced me into doing anything in front of the camera, and when I told him to just leave me alone and let me write my restaurant book, he was smart enough to tell me to do it on-air.  When I look back on the beginnings of it all, I still can’t believe I was at the forefront of the medium.  So, hearing Jon address the crowd this night was familiar; he’s now at the forefront of doing a show on the web.  At the urging of my former show viewers, I always plan to do the same, but just can never find the time.  So, I really applaud Jon for getting it done.  And from his garage, no less!

One thing he said that was of particular interest to me was that on network TV, “thirty minutes” really means “twenty-one,” so the web is more desirable because there, thirty means thirty.  But everyone in the biz keeps telling me that even my ten-minute vids are too long nowadays, in the age of six-second Vine videos!  I keep trying to figure-out how to pare my half hour rants down to six seconds!!!  So, Jon gave me hope that not everyone has the attention span of a flea. 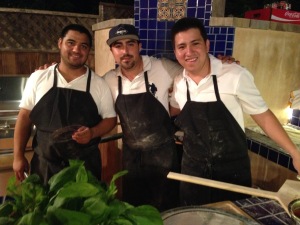 After we were finished eating, drinking, listening to Jon’s welcome speech, and seeing a few clips from Pizza With Writers, we were sent off with a really cute touch–each guest received a small pizza box, with a pizza cutter/bottle opener inside.  If we chose, (which we all did, of course!,) we could take our boxes over to the oven and fill it with the leftover pizza! What a fun way to exit a party!

Okay, as promised, my horror story about that party for Mr. X.  We rarely celebrate his birthday, which is his choice.  (That, of course, is the opposite of my birthday desires, which is to celebrate all month long!) One year, I asked what he wanted to do, so he jokingly (which I didn’t quite get) answered, “Pizza party.  Limo pizza party.”  I couldn’t imagine what that was, but I went with it.  And, of course, did it as a surprise, (which he hates, but it was what I thought he had requested, so who am I to argue with his birthday wish?!) 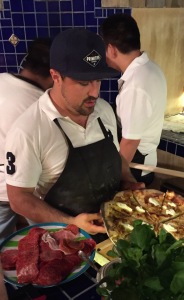 I hired a limo, and ordered pizzas from half a dozen places from Beverly Hills to Malibu to Ventura!  I even mixed it up by ordering creative milkshakes from Cafe 50s as the third stop.  And I brought all kinds of fun candy with us because it was a party after all.

I invited our three best friends, and had them in the limo to be part of the surprise.  I told him a pal was bringing us food, which he wasn’t happy about to begin with, so, when the limo driver rang the bell, I told him I needed help bringing the bags into the house.  Then the driver popped-out and said, “Surprise!”  Mr. X was not pleased, and went back in the house and got on the bed and put on the TV.  I had to beg him to come for a “little ride.”  He was pretty pissed, (which is making me laugh out loud just writing this,) and when he got to the car and saw the surprise pals, I had to calm him down all over again.

So, we all had a really fun, and filling time.  By the time we got to Ventura, my guests were ready to throw up if they saw another pizza, which they did.  And then I went to the trunk to bring out the surprise pièce de résistance.  When I brought out yet another pizza box, I heard nothing but groans.  Until I showed them what it really was–something special I had designed, with a big assist from Liz Brooks at the Butterfly Bakery, who executed it for me.  It was a carrot cake, disguised as a pizza!  The cake was in the shape and size of a pizza, the cream cheese frosting looked like the cheese, and we used lots of carrots to look like sauce.  The icing on the cake, so to speak, was this: Liz sliced dark strawberries really thin to resemble pepperoni. That was a genius touch.  And then I wrapped it all up perfectly by going to a pizza place and purchasing a box to present the cake in. That was truly one of my shining moments.

The best part of the whole night was that Clarence, The Singing Dog, got to come with us.  Mr. X would have been miserable leaving him home alone for that long, so I figured he was in heaven having his best pal along for the very lengthy ride. (And who better to sing Happy Birthday to him than a dog who was famous for his dulcet tones?!)

The five (and a half) of us laughed the whole time, especially Mr. X, who got a kick out of each birthday present he received.  My guests loved the unique “party,” we were all full from great food, and they each had a lot of pizza to take home with them.  A great time was had by all. Or so I thought. I couldn’t wait to hear what my guy had to say when we got into the house.  But guess what?  He claims (to this day) that he was miserable the entire time!  He hated that the other three had to sit backwards in the limo, even though they didn’t mind in the least.  (I had actually asked when I invited them.)  And when he noticed we were on the way to Ventura, he assumed it was to surprise him with other pals who live there. (But I figured enough was enough, so, even though I had thought of doing that, I had nixed the idea.)

So, that was it.  No more parties, of any kind, for that birthday boy. And that’s just the way he likes it.