I think that most people know by now that I absolutely abhor the taste of alcohol. But I ‘m a fan of the London Hotel in West Hollywood, so when I was invited to the Jordan Vineyard & Winery 40th Anniversary party held on the gorgeous rooftop, around the pool, I just couldn’t turn it down. 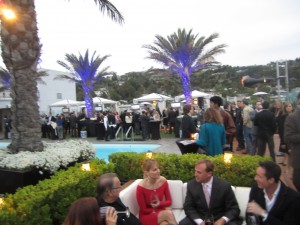 Unfortunately for me, who’s scared of crowds, neither could anyone else because the place was overflowing with guests. And I can understand why–the food and booze were super-generous. Hotel eatery Gordon Ramsey catered the chow, while Jordan provided their wines, of course. (The company has apparently been throwing these fetes around the country, so they have them perfected. I applaud that move; it gives their products nationwide visibility.) 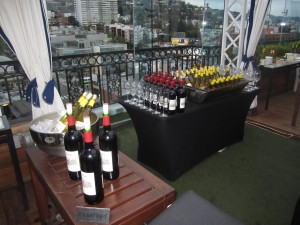 I was relieved to find-out that the wait staff was from an outside company because they were the rudest servers ever!!! In all my years of partying, I’ve never encountered anything like them before! But their abuse begat one of the funniest thing I’ve seen in quite some time: we were on the other half of the huge rooftop space, (the part near the kitchen that wasn’t being occupied by the party,) checking-out the view, with few other revelers around, when my friend Vanessa had to literally chase down the rudest waiter, who was denying us the little piddling cookies for dessert. It was like something out of a cop show! I still can’t believe my eyes!!! How did one company find so many curmudgeons? I’d love to get a gander at that want ad! (I tried to find-out the name of the waitstaff company, but of course the personnel were all too rude to answer me!) 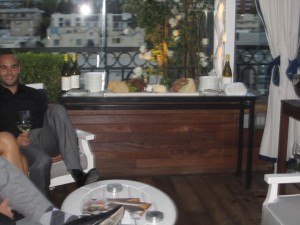 A cabana with the cheese table...and Landon Donovan!

But back to the good parts. In addition to wonderful finger foods, (vegan samosas, pizza rounds, chicken skewers, coconut shrimp, and the best mini cheeseburgers ever!,) they had cheese stations set-up in the open cabanas, along with bread crisps and grapes.

So there was great food and wine, a DJ playing non-intrusive music, tins of chocolate truffles for us to take on the way out, and even one celebrity sighting–U.S. Soccer champion Landon Donovan. Even the insolent servers couldn’t ruin such an excellent evening.