Trending
You are at:Home»PARTIES»PARTY: HOUSE OF HOPE GALA
By Karen Salkin on November 19, 2019 · PARTIES

Since the Our House Grief Support Center has helped a few of my own friends get through the toughest of times, I was more than happy to support the organization by attending this year’s Gala this past week-end. 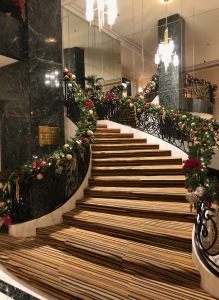 My favorite staircase iin town, all dressed-up for the holidays. Photo by Karen Salkin, as is the one at the top of this page.

It was held at the Beverly Wilshire Hotel in Beverly Hills, (of course,) in the Winter Garden and Ballroom. It’s my favorite hotel in town for several reasons. Foremost is that I adore just entering that side of the building because it’s where Mr. X and company threw my surprise thirtieth birthday party, (only a couple of years ago!) Just seeing that giant staircase to the right brings back great (and hilarious) memories. So I enjoyed myself from the get-go of the Our House Gala.

The cocktail portion of the evening went on for a good hour, which gave everyone the perfect amount of time for plenty of upbeat mingling. The hors d’oeuvres were cleverly mostly vegetarian, (polenta bites, mini grilled cheeses, and tiny risotto balls with a bowl of marinara sauce to dip them in,) with a tuna roll and a Thai chicken “salad” on spoons for the heartier eaters. And, as always for this venue, the servers were perfectly pleasant.

The sizable silent auction was the centerpiece of the room, with something for everyone. There was jewelry, artwork, dining and entertainment opportunities, and even big bicycles! 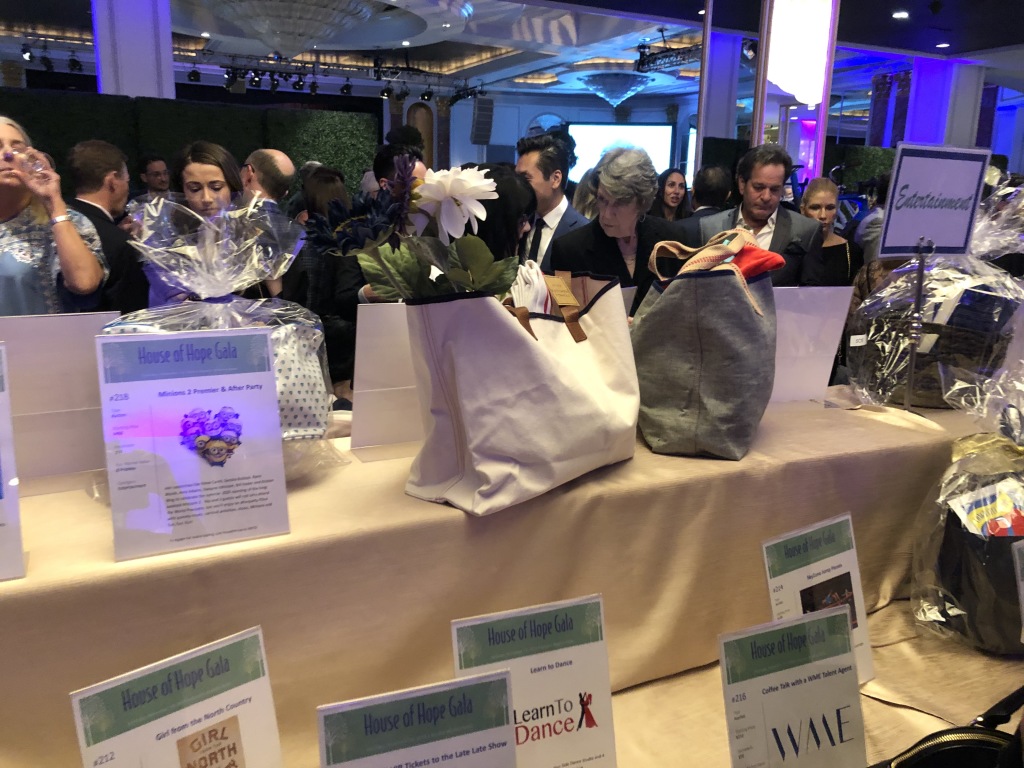 Part of the silent auction. Photo by Karen Salkin.

The ballroom looked gorgeous, all decked-out in purple and green with tiny lights all around. The organizers very smartly put the greenery centerpieces on high pedestals on the outside tables, so that every guest could have a clear view of the stage. (And each other!) 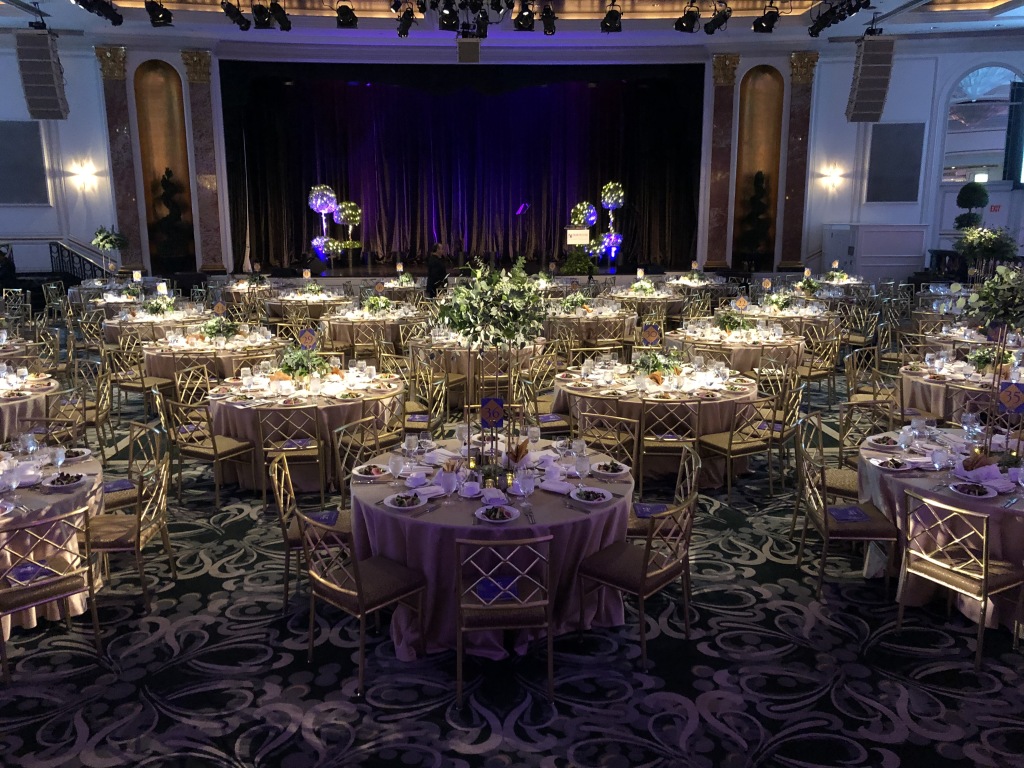 That was good because the host for the evening was very attractive Broadway performer Jonah Platt. I had seen him in a Christmas Panto two years ago, but, since he was playing the Beast then, (from Beauty and…,) we were deprived of seeing his good looks for all but a few minutes of that show. Quel dommage! 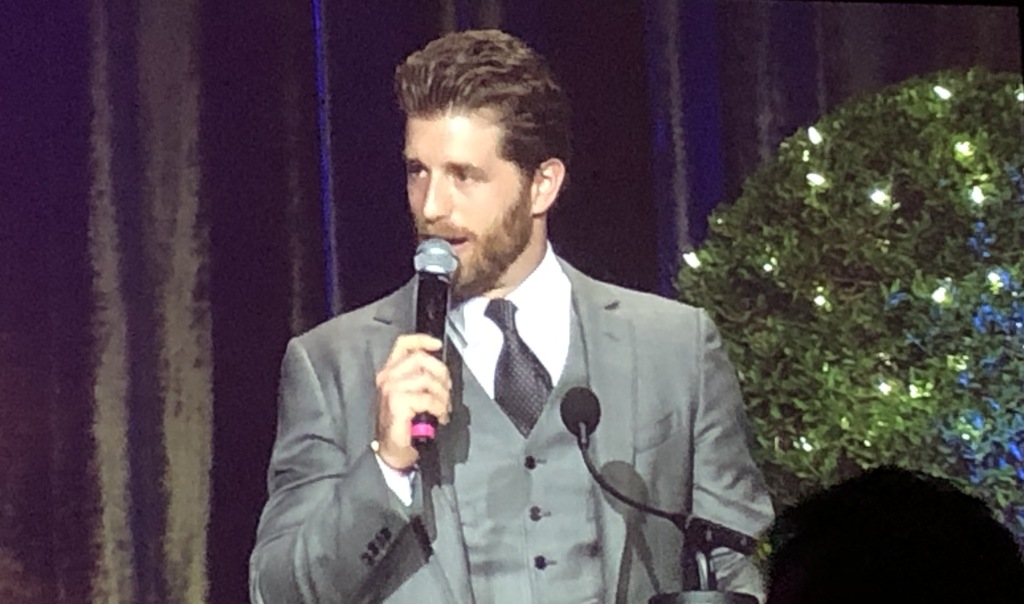 So I was happy to see his handsome face, (and talent,) at this Our House Gala. Jonah was a lovely host for the proceedings. My friend was particularly impressed with his ability to go from talking about the issues right into entertaining us with a few beautifully-sung tunes. He was the perfect emcee, on every level. 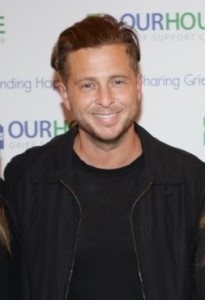 As a bon vivette who attends this kind of fete all the time, it was refreshing to see a packed house for an event that didn’t try to make it about celebrities. But I did spy two, anyway, who even the PR people didn’t recognize, which means they were not in attendance as special guests, but rather as just regular people, which I so applaud. (But no one can ever elude my eagle eyes.)

The first is OneRepublic’s Ryan Tedder, who looks exactly like he does on TV! He’s now also a big music producer, and is on the panel of the TV show, Songland, which we chatted about for a bit. 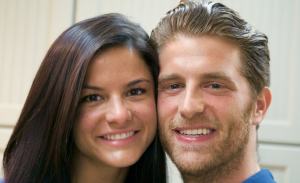 A few minutes later, I literally bumped into a really pretty girl in a red dress, (which stood out since most of us were in LBDs, of course, none more “L” than mine!) Actually, we bumped into each other, and both began profusely apologizing. But I cut her mea culpa off pretty quickly because I recognized her from an early season of So You Think You Can Dance, where she made it all the way to the Top Four. She’s adorable little Courtney Galiano, who has worked in the biz ever since. As we were gabbing, I asked, “Aren’t you married to someone really cute?,” because I knew that–I just couldn’t remember who he was at the moment. She laughed, and answered, “Yes—Jonah Platt!” How fun. We dished about that for a bit, and that was one of the highlights of the Gala for me.

But mainly I was interested in this organization. Several people talked about its good works from the stage, and thanked everyone for being there. It hit me that at least half of the attendees were people who had lost someone very close to them, and Our House assisted them with their grief. They must have helped a lot because everyone seemed to be in great spirits.

The big moment of the night was the honoring of Anthony Guagliano with the Founder’s Award. He received a lot of love from the assemblage. I was not familiar with him, but anyone who dedicates his or her life to helping others is fine with me. 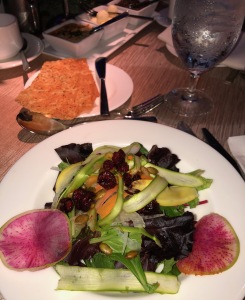 The pretty salad and accoutrements. Photo by Karen Salkin.

Here’s a shock for you guys—I could not stay for the dinner! I ate the salad, which was accompanied by hummus and tapenade and some of the greatest cheese crisps I’ve ever tasted, but that was it. I had to get home to write about it all! But as we exited, I noticed a dance floor had been set up in the cocktail space, and the servers were wheeling in giant buckets of soft drinks! I bet that part of the night was tons of fun, and I’m sorry to have missed seeing people decked-out in cocktail attire let loose.

But here’s my most important take-away from the Our House Gala: I hope that none of us ever needs this grief support center, but it’s good to know that it’s there, just in case.