Trending
You are at:Home»PARTIES»PARTIES: THE SILENCE OF THE LAMBS’ THIRTIETH ANNIVERSARY CELEBRATION AT THE HOLLYWOOD MUSEUM
By Karen Salkin on October 25, 2021 · PARTIES

Last week, after not doing so for a year and a half, I finally made it out to an evening event! And it was quite the soiree. It’s sort-of fitting that my first foray into the grown-up world again was to the Hollywood Museum in—where else?–Hollywood, of course! 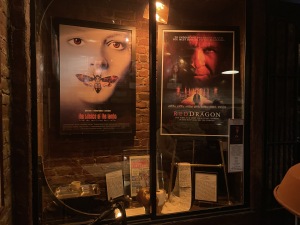 Part of the Silence of the Lambs exhibit at the Hollywood Museum. Photo by Karen Salkin.

The occasion was the thirtieth anniversary of the film classic, The Silence of the Lambs. How is it possible that that classic film has been haunting us for three decades already??? It’s good of the Hollywood Museum to always reminds u of those milestones.

The celebration took place shortly before Halloween, so absolutely everyone in attendance was in a party mood. (And guess who had the best, most appropriate fingernails there? Yours truly, of course!) 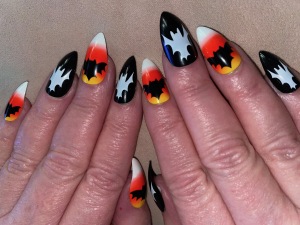 The fete was held in their Dungeon of Doom this time. Most of their parties (pre-Covid) have been on the top floor of the edifice, so having this one downstairs, right in the middle of the very spooky exhibit, put us right in the spirit. That area features the original jail cell set that housed Hannibal Lecter in the film, and there are some of the costumes and props from the movie in that section, as well. It’s actually kind-of scary down there.

But it wasn’t too frightening that night–the whole evening had a wonderfully convivial party atmosphere. Even all the staff were fabulous and friendly. I especially loved the waiter who told me where to find the best candied pecans I’ve ever had. 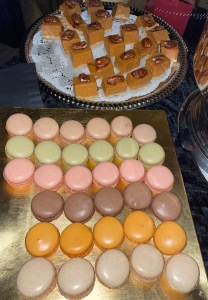 The entire event was so well done. It was actually the most fun I’ve ever had at one of the Museum’s receptions! The guest list was more exclusive than usual because of the smaller space, (and the Covid rules, too, of course,) so it was easy to hang-out with the people you wanted to. My friend Marc and I had the great fortune to spend most of our time with famous old pals of mine.

First up was dancer-extraordinaire, Oscar winner (for West Side Story,) George Chakiris. I think by now many of you know how in awe of that man I am! And he’s always the nicest one anywhere. He got such a kick out of my Halloween stiletto nails; he wanted to know everything about them! Marc pointed-out that George and I have the most (and best) hair in Hollywood, so he joked that maybe I’m really Greek, as George is.

Then Ruta Lee stopped by our table. She and I reminisced about when we first met way back in the day; she had come up to me at a party back then to tell me she was a fan of my TV show, which I really appreciated, coming from such an accomplished actress. But since then, I hadn’t seen her in a long time, (actually, I have barely seen anybody!,) so meeting up with her again last week was nice. And let me tell you—she looks fantastic!!! 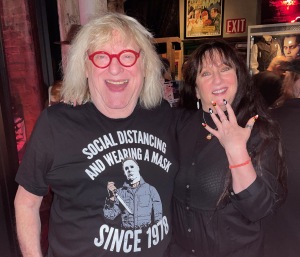 Bruce Vilanch and Karen Salkin, showing off her Halloween nails, of course. Photo by Marc Winer.

And then along came the person I most wanted to hang with—Emmy winner Bruce Vilanch. We had just talked on the phone the day before, so we knew to look out for each other. Bruce is actually the first person outside of Mr. X whom I’ve hugged in over a year and a half!!! I’ve made sure to not get that physically close to anybody anymore, but with Bruce, I couldn’t help myself; we were just so happy to see each other again! So we had dinner together in the party room in the dungeon.

Speaking of the repast, I loved the safe way the food was presented this time. There were three stations—a shrimp cocktail bar, a full buffet, and a dessert one—and rather than the usual manner of the guests helping themselves, they had masked-and-gloved staff members serve us everything. It was actually sort-of charming. And the entire buffet was behind plexiglass, to boot. 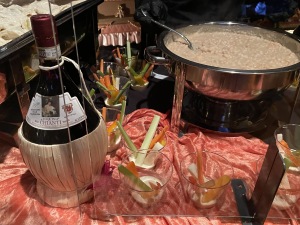 The fava beans with a nice Chianti. Photo by Karen Salkin.

First up was a cheese and fruit platter, which would usually be hard to have someone serve you, but the girl doing it made it easy for everyone. There were also clever cups of crudite, which I adored. The hot foods were meatballs, spinach ravioli, and chicken skewers, and one surprise dish. When we were on our way there that night, Marc said maybe they’d be serving fava beans and a nice Chianti this time, which I thought was a great idea. And guess what? They did just that!!! (Maybe he should work for them!) I’m not a fava beans fan, but I loved the presentation of a bottle of Chianti right by that chafing dish.

After dinner, the assemblage moved into the area with the The Silence of the Lambs set, for the speeches. It was all very interesting. (And I loved the special lighting they set up for that portion of the evening. I’m sure all the speakers, such as horror film regular Dee Wallace, appreciated it.)

Dee Wallace addressing the crowd from the podium at the end of the dungeon space. Do you notice anyone creepy watching on the left side? Photo by Karen Salkin.

Then Marc and I walked around the dungeon for a bit, and discovered some other fun exhibits down there, including the original costumes of Nightmare on Elm Street‘s Freddy Krueger, Friday the 13th‘s Jason, and Halloween‘s Michael Myers.  That makes it all perfect for a pre-Halloween visit now that most of us are out and about again.

But the exhibit stays up in perpetuity, so all of you The Silence of the Lambs fans can see it at any time.

And, for those of you who still worry about the virus, as I always do, I’m glad to report that masks are still required at the Hollywood Museum. And I received some more good news from the museum peeps. They announced that their ventilation and filtration system was upgraded during the pandemic, and is now outfitted with hospital and school quality filters, which kill up to 99.9% of mold, germs, and viruses that can cause COVID-19. That is soooo comforting!