Trending
You are at:Home»OLYMPICS»OLYMPICS: OLYMPICS 2021 WRAP-UP PART I
By Karen Salkin on August 20, 2021 · OLYMPICS

Many of you may be done with the recent Summer Olympics, but I suspect that most of you didn’t even watch any of it! (Well, maybe a bit of gymnastics because of the Simone Biles situation.) So I’m here to edify the curious among you. As my proofreaders, along with some of my loyal readers, point-out when I review TV shows, sporting events, awards shows, and beauty pageants, I watch it all so you don’t have to! And then I give you the only highlights worth knowing about. (And I can just about guarantee they’re usually insights you won’t read anywhere else.) 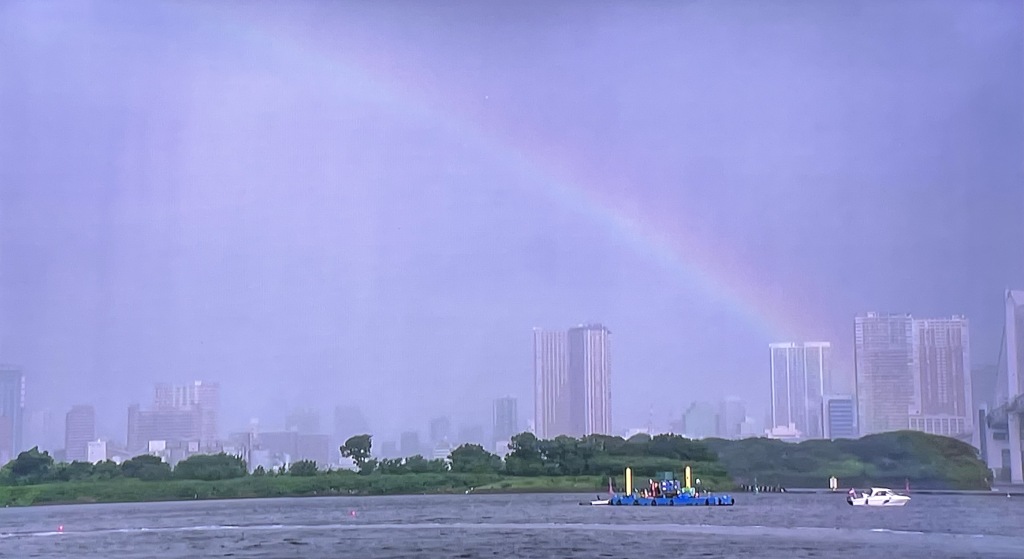 This rainbow appeared over one of the Olympics venues one morning, giving everyone who saw it a jolt of happiness, I imagine. Photo by Karen Salkin, off the TV.

I’m writing this wrap-up perhaps a tad later than other outlets have because, since I watched the proceedings almost around the clock for the full sixteen days, I needed to take a minute to digest it all. And I feel that it’s never too late to discuss this truly amazing event, especially in light of the gargantuan effort it took to stage it.

Now that I’ve had some time to reflect, I’m sharing just an infinitesimal number of my thoughts on it all. (I’m featuring my overall impressions right now, and next week’s Part II will cover the specific athletes; even verbose moi knows that it’s all too much for one article.)

By the way, I am aware that this just-ended Olympics was officially titled “Tokyo 2020,” but that’s a bit confusing. I think they just kept that date in there because all the signage had already been made, and Japan didn’t want to go to the extreme expense of changing it all. Even the TV analysts and commentators kept getting it wrong. So, as to not add to the confusion, because many of us still can’t remember what year it is since we lost so much time during this ongoing pandemic, I’m just stating that it took place in 2021. 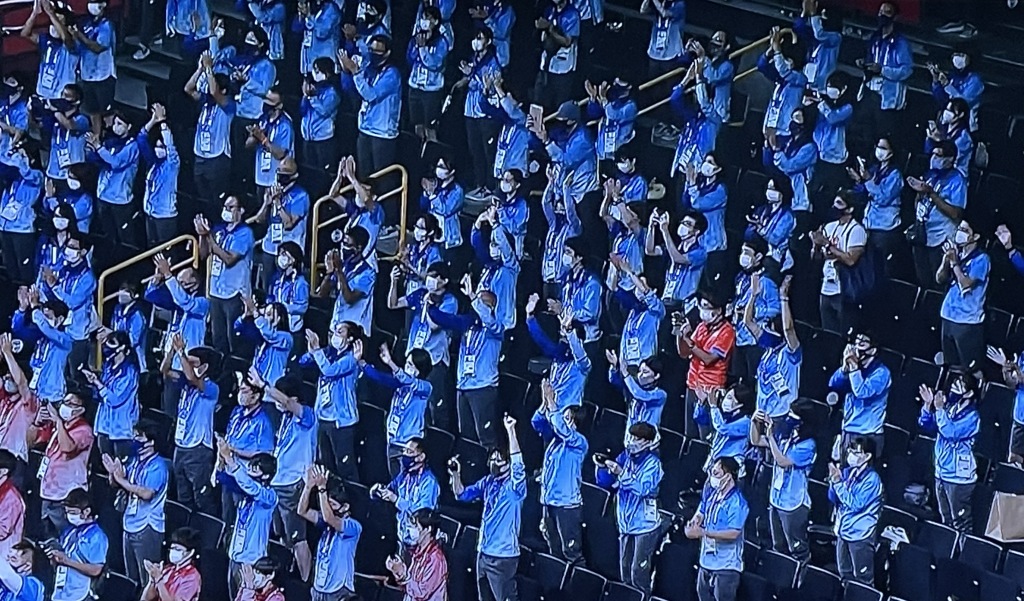 This is one of my favorite images of the 2020 (or more accurately, 2021) Oympics. The basketball venue allowed all these volunteers into the Women’s Basketball Final on the penultimate day of the Games,, and they’re giving their Japanese silver medalists a standing ovation! Photo by Karen Salkin, off the TV.

I didn’t take even one note during all the TV coverage, nor do a single tweet this time, because I was too busy trying to get through it all. (But I did do a bunch of crossword puzzles during the somewhat slow sports, like dressage and tennis, which means that my brain should be somewhat sharper now.) So I don’t have my usual specific notes to share with you.

But my main thought is that I’m so happy for the athletes and their families that the Olympics committee decided to go ahead with the belated games this year. I’m still crushed for the people who missed out on the 1980 and 1984 renditions because of crazy world politics. These athletes train for their entire lives up until that point to have their day in the sun, and the politicians should not have taken that usually once-in-a-lifetime opportunity away from them. 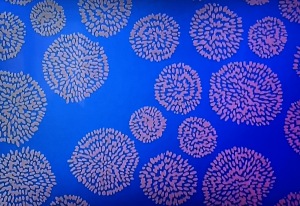 This is one of the official Olympics images that the TV stations kept displaying as they went to break. I feel that it’s somewhat unfortunate as it looks sort-of like the virus, doesn’t it? Photo by Karen Salkin, off the TV.

But this time was very different–the International Olympics Committee (the IOC) had no choice but to postpone a year from 2020; there’s no way the Olympics could have been staged while so many people were dying from Covid worldwide! It would have been waaaay too dangerous for everyone concerned. But with the smart and fair among us being vaccinated now, and having no auxiliary people around the athletes this time, (read: fans,) going ahead in 2021 was the right thing to do. And it was proved to be.

Would the participants preferred to have fans on-site cheering for them? Of course they would have!!! But would they rather have participated in a rare sporting event, some even coming out of there as an Olympic Champions, even without crowd support? That would be an emphatic of course, as well!!!

I actually loved all of what I watched. And watch I did, on five different channels. All day and night long. [Note: I didn’t view anything on Peacock, even though I have that service. Dish is soooo much easier to deal with than Apple TV!] I watched a little bit of every single sport, (not just the glamour ones of gymnastics, basketball, and track and field, as many do,) including fencing, equestrian, archery, shooting, kayak and canoe, and even Modern Pentathlon! 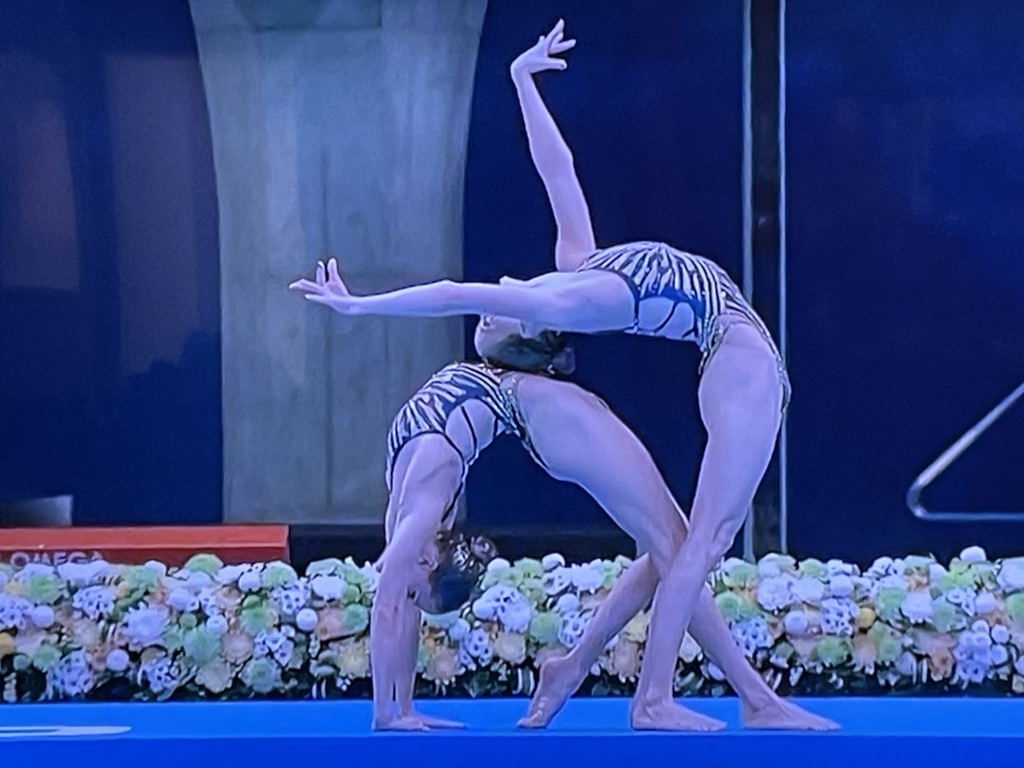 An Artistic Swimming duo. And this is just the pre-routine “deck work!” Wow. Photo by Karen Salkin, off the TV.

And how about one of my faves–Artistic Swimming? (It was previously known as Synchronized Swimming, for you nescients out there. I usually hate name changes, but they were correct in this one—synchronization is just one element of what these athletes can do!) They’re really the most amazing people in sports. Many of us can swim, run, play tennis, flip around, play golf, fence a bit, ride a horse, etc.–not well, of course, but at least those abilities are in the realm of possibility. Heck, even I can do all of those! (Again, as far from well as one can get!) But who amongst us can hold our breath, upside down, submerged in water, with our eyes open the entire time, never touching the bottom of the pool, and perform all those moves??? And even more difficult is…having to wash the gelatin, or even chlorine, out of your hair every…single…day! I can’t even imagine dealing with that one non-athletics issue. 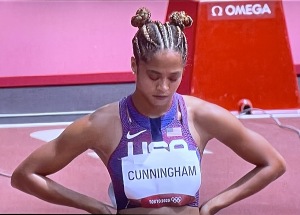 Just one of the many intricate braid designs on display at the 2020 Olympics. Photo by Karen Salkin, off the TV.

While we’re on the beauty and grooming aspects of being an Olympian, did anyone else realize that the athletes’ Village must have had very many braiders on-hand at all times? I could not even count the female participants who featured creative braids in their hair on a daily basis. There were more fun hair-dos than just the usual utilitarian ponytails and awful-looking top-of-the-head piles. (Why does anyone do that latter one, anyway? They all look like they’re just getting ready to wash their faces!) 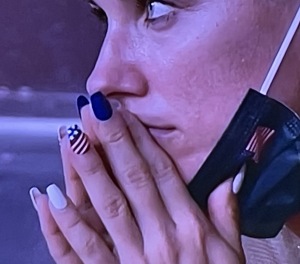 One pretty athlete’s pretty American nails. Photo by Karen Salkin, off the TV.

Many of the ladies were also rocking creative fingernails. As a girly-girl myself, you know I could not get enough of them! (Since this time the coverage did not include any fun features about the Village, nor even anything showing us around Tokyo, I don’t know for sure that the athletes had access to beauty services, but it seemed pretty apparent to even the casual observer.)

But while they were getting all glammed-up, many of the women should have considered de-fuzzing their upper lips. (That’s a polite way of saying—why do so many female athletes not know enough to get rid of their mustaches???) I’m just sayin’. 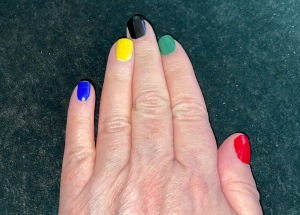 On the opposite of glamorous, the organizers made many beach volleyball players compete in the pouring rain! How uncomfortable for them. And some of the runners had to do the same, which does not seem like it would be safe. At least the volleyball players just have to fall in the sand, but the track peeps could have really hurt themselves if they slipped!

Speaking of the track, it seemed that some of the American track “stars” were too cocky to try hard enough through the early rounds, especially the males. And then they complained. For example, when the 4×100-meter relay team messed-up, former “fastest man in the world,” Trayvon Bromell, told the interviewer, “This is some BS.” Just which part of it did he consider to be BS? The bad baton pass between two of his teamates, or his own mediocre start to the race? Someone needs to give those men a good talking to. 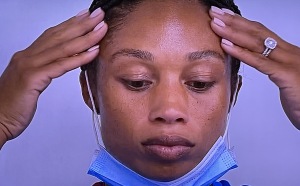 But the nails I think look best, (especially with that beautiful ring!,) these elegant ones on all-time Olympics track and field medalist, Allyson Felix. Photo by Karen Salkin, off the TV.

Here’s my last thought on the Olympics production, as a whole: as bland and not special as the Opening Ceremony was, the Closing Ceremony was not done very well, either. It should have been tons of fun for the athletes who had stuck around in Japan to celebrate their achievements. Yes, they all did get to mingle on the field a bit, but they were separated into four quadrants. That was done either to make the number of them look bigger, by not having them all congregate in just one part of the surface, or perhaps it was to keep them from becoming super-spreaders because, even though they had all competed at some time in the previous week(s), they were not together en masse. And I doubt that they had been hugging and taking pix with their bare faces touching each other during the competitions. Even without that separation, the entertainment portions of the closing were uber-weak. I just hope that the French will do better three years hence, and that the world situation will allow it to be so. 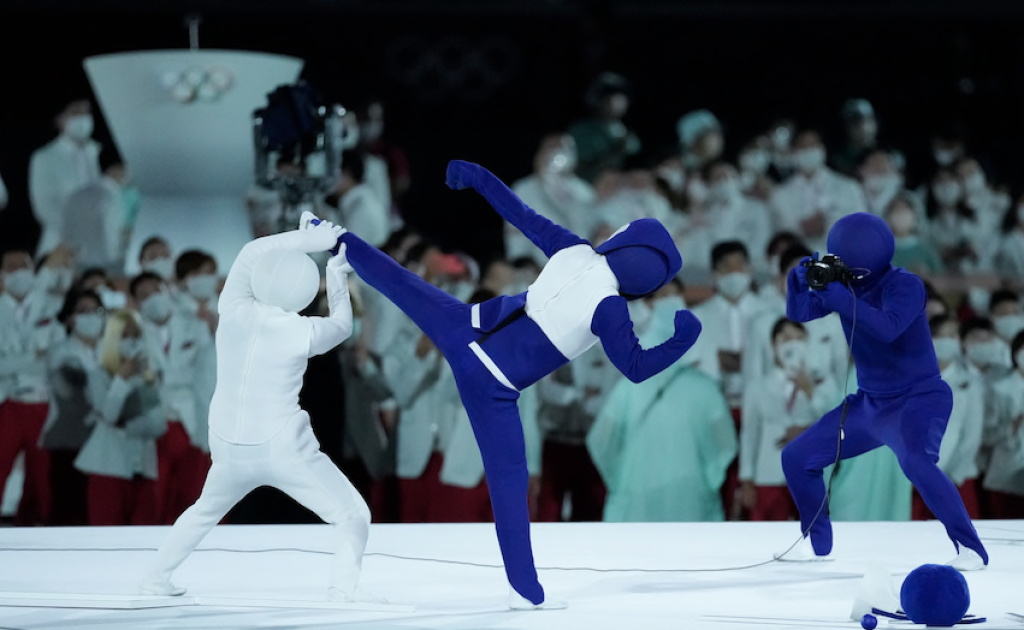 One of the sports pictograms by the Japanese performers at the Opening Ceremony, as is the one at the top of this page.

Despite all that negativity, I did have several favorite moments, beginning with one very clever presentation at the opening ceremony. A sort-of blue man group portrayed all thirty-three of the sports that would be featured in the next sixteen days, by getting into a series of very quick poses, turning them into living pictograms with just a few clever blue-and-white props. I loved that! That one little feature set the entire Olympics off right for me.

All the rest of my favorite parts of the Games are about the athletes’ moments, which will be featured in Part II of my Olympics Wrap-up next week. I can’t wait to share them with you!