I recently attended the Broadcasting & Cable Hall of Fame event at the Waldorf Astoria here in New York. And for the first time ever, I wanted to be in the press room. (I occasionally do that for sports, but my interview questions are so different from everyone else’s, that I sometimes don’t love being in there. The other members of the press usually don’t appreciate my humor, even though the athletes do.) 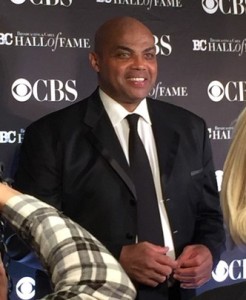 The one and only Charles Barkley. Photo by Karen Salkin.

And, why, you ask, did I want to veer from my norm? Because one of the honorees was Charles Barkley! OMG!

[Digression—back in the day, when I was doing my cable television show in Los Angeles, a couple of outside producers were trying to create a regular nighttime talk show for me. They asked me who I wanted as my co-host, and without hesitation, I exclaimed, “Charles Barkley!” And this was before he was doing Inside The NBA on TNT. They immediately nixed that idea because they didn’t want to have a show where both people speak their minds! They wanted me to have a co-host who could rein me in, not encourage my errant behavior!]

Months ago, during the NBA play-offs, a pair of executives from the Broadcasting & Cable Hall of Fame surprised the TNT guys by going on their show and announcing that they were being inducted into the Hall. As soon as they mentioned that the date of the gala was October 18, I knew I had to be there. I was already invited to several other events in New York that week, but the prospect of meeting Charles put me over the top. As much as I was semi-dreading my return to the Big Apple after a two year hiatus from the East Coast, I decided to brave it. (A tarot reader in LA had told me that I would be very disappointed in what I was hoping would happen there. Boy, was she ever wrong!!!)

The BCHOF dinner was actually massive, and honored many more peeps than just Charles and the guys, of course. (By the way, Kenny Smith did show up, with his stunning wife, and they were both lovely to me. But I was pretty surprised that Shaquille O’Neal and Ernie Johnson weren’t there, too. With Charles and Kenny, though, the other two were not missed.) Some of the other honorees were Larry Wilmore, who’s so much taller than you could ever imagine; CNN’s Don Lemon; Deborah Norville, who looked absolutely gorgeous; New England Patriots (boooo!!!) owner Robert Kraft; and CW network exec Mark Pedowitz. Not that looks matter that much in life, (but they do,) but I was happy to see that the entire CW contingent was attractive. And the handsomest man there, no lie, was my very own friend, Mitch Nedick, the CFO of that network. You go, Los Angeles men! 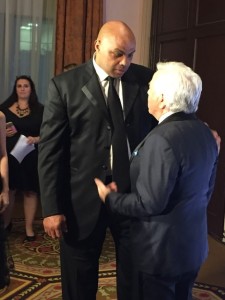 One of the reasons I enjoyed being in the press room for this event is that I got to witness a beautiful moment; Robert Kraft said to someone who was telling him to go into the cocktail party, “I want to say hello to Charles.” Their warm embrace was lovely to behold. I just love sportsmen!

You would think that I would have a lot of questions for Charles Barkley, since I’ve been holding them in for something like twenty years, but instead we just talked about a mutual friend of ours, and how she and I had taken Chuck’s father to a club one night. And I told him how great he looked with his new weight-loss. He thanked me profusely for that, I guess because no one else was brave enough to comment on his weight, either way, and he said, “I just got me some new hips, so I’m trying!” And then, as he turned to go, he looked back at me, and told me he appreciated my mentioning it. That’s just one more reason that I’m such a fan of his. (A new case was made for my extreme admiration when I observed that he stayed in the press room for an uber-lengthy time, shaking hands and taking pictures with every single person who approached him. Now, that’s a great guy.) 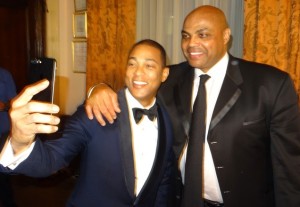 I also got to tell Charles that I wish he would run for President one day, rather than for just Governor of Alabama, (which he always seems to be considering,) and he told me, “I could do better than these fools!” That made me laugh, as he always does, actually.

The entire Broadcasting & Cable Hall of Fame evening was beautiful. The guests were all dressed up, with most of them being in black tie attire. It looked like a soiree in a film! (No one in LA gets that dressy for anything, outside of the Oscars.) And this was on what my mother would have called “a plain little Tuesday night!” Many people chose to mingle in the check-in hallway for awhile before even going into the cocktail party. That portion of the evening was very lovely. The food looked delicious, but, with the fare being items that I can’t eat, such as sushi and crab cakes, I couldn’t sample it to tell you about. 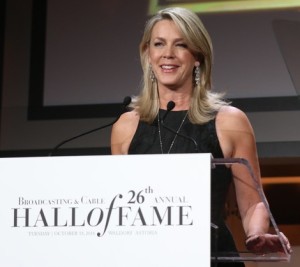 Deborah Norville, speaking at the dinner. Photo courtesy of the BCHOF, as is the big one at the top of the page.

When the assemblage finally moved into the dinner, I noticed that the ballroom was cavernous. I had never seen that part of the Waldorf before, so I was in awe. (And I think by now you all know that hotel banquet rooms rarely impress me at this point in life.) I just took a gander at it, but had to move on—I still had three more events that night! (I didn’t think it was possible to be more exhausted from my New York life than from my LA one, but this coast is much, much worse! I’ve had almost no sleep…in over two weeks!)

I did plan to return to the hotel for the BCHOF after-party, but I was too far away to make it back there. But how did the rest of those people keep going for so long? Especially in fancy wardrobe and shoes?! I guess when you’re having as good a time as the Broadcasting & Cable Hall of Fame provided, time really does fly. No wonder so many important people turned-out for it.