So, I left LA at the crack of dawn last week, waited almost an hour for the kind friend who was getting me from the airport, and then rushed to the Garden of Dreams Talent Show at Radio City Music Hall. I seriously don’t know how I did it, but I felt it was a worthwhile enough organization to make the effort. And I’m glad I did!

It was all excellent. The Garden of Dreams Foundation “makes dreams come true for children facing obstacles,” such as illness, homelessness, and foster care. I’m very grateful that I was made aware of it. (You can learn more at www.gardenofdreamsfoundation.org.)

Just one tiny section of the food. Photo by Karen Salkin. The very first one on her new iPhone!

The evening started off with a lovely reception in the downstairs area of the venue. It was catered by JackMonkey Catering, and was the perfect spread of healthful sandwiches, salads, and snacks (the three “S”s of nutrition!,) accompanied by the two “C”s, cookies and candy, for those who needed just that little jolt of less good-for-us fare. I was happy to spy some of the kid participants excitedly getting ready in another area down there, and happily chomping on pizza. I didn’t want to be chowing-down myself if they weren’t! So, it was a win-win. (Actually, let me add another “win” because the downstairs of that place is just art deco gorgeous, especially the ladies room. OMG!)

There were several local celebrities on-hand for the festivities, like the Rockettes, (which no one mistook me for, I’m sad to say,) and when they all got on-stage, the audience was thrilled to see them. So, props to the celebs who were there. (I’ll tell you about the ones I recognized in my next Celeb Sightings column in a few weeks.)

Some of the kids performing. Photo by Lauren Clarke-Bennett.

After the reception, we went upstairs to the auditorium and were treated to a showcase of talent from wonderful children, teens, and young adults who entertained the giant crowd royally. They had everything from rappers to dancers to musicians. All the acts were so good that I can’t even single one out. But they moved my friend Lauren to tears, something I had never seen before! Props to them for that. What an exciting time for everyone.

The audience was great, too. (I was happy to see tap dancer extraordinaire, Savion Glover, who still looks young, by the way, sit down right near me! I’ve met him before, but was too glued to the action on the stage to say hi.) Now I wish that I had done my TV show in New York occasionally because if some of these people had come to it, I would have had a very enthusiastic, appreciative group!

Adding to the fun atmosphere was the gift of giant boxes of popcorn for everyone, the likes of which I haven’t seen since I left the circus! I don’t know how some of the little ones were finishing it all.

So, my first night in the Big Apple this trip was a success! I saw an awesome show, ate some lip-smacking grub, met some cool people, had circus-type popcorn, and did it all in an iconic theatre! I hope the rest of my events here are as special as this one. Knock on wood. 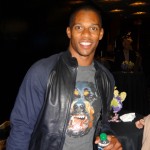 [Note: You loyal readers know that I always give the yin-and-yang of situations, so I have to get one little negative off my chest, that had nothing to do with the actual organization, so it’s no reflection on them. But if one young person, who plans to get into a business that deals with others, learns from this, I’ll be glad I told the story. Being a major New York Giants fan, the only celeb I was excited to see, (also, the only one I knew, outside of Matt Lauer,) was Victor Cruz. I had thought of going up to him at the beginning of the reception when he was standing all alone, to introduce myself and ask a quick question, so I would then be able to talk about this event on the Sports Radio show that I’m a guest commentator on. But, being such a fan of fairness, I decided to politely wait my official turn at the end of the press line. (You know I don’t ever go on those press lines, by the way, but I decided to do it just this once, for the purpose of getting a word or two from Victor for the radio show.) But, alas, he had a rude handler who wouldn’t let me speak even one word to him, even though I had followed all the rules of etiquette, as usual. As she was pulling him away, I got to quickly ask, “How’s your mother?,” because they do a commercial together, and he seems to be as bonded to her as I was to mine. He shot me back a warm smile and said, “Great! Thanks!” I have a feeling he would have been equally pleased with my real quick question, but we’ll never know. I just hope that if he ever comes to LA to do Dancing With The Stars, (which I always push for,) they’ll assign someone to him who knows how to treat people the right way, especially the media she’s trying to court! What a shame. But remember, she doesn’t represent this worthwhile organization.]